Factions of the Tyr Region | Campaign Resource for Fifth Edition 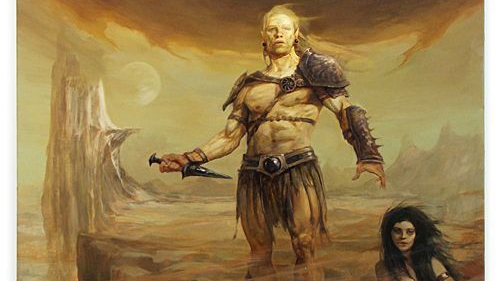 This guide is intended as a resource for my Saturday players in our upcoming Dark Sun campaign. However, most of the information within is pulled directly from classic Dark Sun lore. Feel free to use it in our own Fifth Edition Dark Sun campaign settings.

On the dying world of Athas, various factions struggle for control of what little civilization is left. These are some of the most important factions found in the Tyr region.

The Veiled Alliance is a network of friends and allies that help preservers and thwart defilers without exposing their identities to untrustworthy elves and nosy templars. No all-encompassing Veiled Alliance exists. Rather, a different Alliance (called a chapter) holds power in each city-state. All serve much the same functions, but each operates in a unique, strongly independent style.

Regardless of the chapter, all chapters of the Veiled Alliance have five distinct aims.

The Veiled Alliance in Urik is on the defense and struggling. The alliance in Urik concerns itself with overthrowing the king. However, Hamanu’s powerful army makes this unlikely. Currently, two rival Council factions struggle for the society’s leadership following the disappearance of the Alliance’s longtime leader.

Like most of the Tablelands, powerful merchant dynasties control commerce in the Tyr Region. The two native houses, Vordon and Stel, reside in Tyr and Urik respectively.

Regardless of the house, all merchants follow a strict code of behavior, known as the Merchant’s Code. The code varies from house to house, but in most cases, it conforms to the following principles:

Inika operates out of its headquarters in the city of Gulg to the east of the Tyr region. It is small compared to some of the other major houses, but this is by choice. Dealing in small, valuable cargoes, such as kola nuts, exotic feathers, spices, and gemstones, Inika sees the benefit in remaining small and efficient. Inika manages Fort Skonz at the crossroads between Tyr, Silver Springs, and Altaruk.

Despite the deteriorating situation in its home city of Raam, M’ke persists, desperately fighting for survival. It has an emporium and warehouse in Caravan Way directly across from House Vordon’s emporium.

A vast trading power from distant Nibenay, corrupt and decadent, Shom is in advanced stages of decline. Still, Shom serves both Tyr and Urik, trading in obsidian, rice, water, and wood with minor trade in art and weapons.

Closely associated with the warrior culture of Urik, Stel is without question the most aggressive and militaristic of the merchant houses. Stel specializes in the spoils of war–slaves, stolen cargo, weapons, and on occasion, hostages for ransom.

The leading merchant house of the city of Draj is infamous throughout the Tyr region. Tsalaxa engages in endless games of espionage and intrigue in order to secure the most valuable trading contracts. The house is well known for its ruthless business practices.

Once one of the most feared and respect of Athas’s great houses, House Vordon has become something of a laughingstock. This transformation is mainly due to the demented excesses of Tyr’s sorcerer-king Kalak.

Under the leadership of its current patriarch, Taboaros, House Wavir has risen far above its humble beginnings to become one of the most powerful merchant houses in the Tyr region. From its base in Balic, Wavir now controls vast trade routes, dominating the shipment and sale of grain, ceramics, and precious metals.

The Clearwater elves are a permanent fixture in the Tyr region. Their nomadic travels have taken them from the Lake of Golden Dreams to Bleak Tower, from Bitter Well to Walis and beyond. Clearwater traders are known for their skill at bargaining and appraisal; dealing with them takes every ounce of business savvy and guile possible.

The Silver Hands aren’t a typical elf tribe on Athas. While other elves run free, the Silver Hands have decided to settle down. The tribe has claimed a small oasis as its own and bestowed upon it the lofty name of Silver Spring. Do not be deceived: there is nothing silver about this oasis except for the coins that the tribe’s chief craves. The water is foul-tasting and less than clear, but it is safe to drink and therein lies its attraction to the elves.

Emerging from the desert, racing like a hot, destroying wind across the dunes, voicing high, ululating war-cries–few things in the desert are more terrifying than the Swiftwing tribe of elves on the attack. Their raids are notorious throughout the Tyr region; in combat, they have few equals.

The elves of the Water Hunters tribe wander the sandy wastes and rocky badlands in an endless search for sustenance. The hunter-gatherers and herders that make up the tribe embrace the old elven ways. They reject the new ideas that other tribes have adopted, declaring mercantile activities to be the province of the slower races and not worthy of true desert runners.

After a destructive disease wiped out most of this once-great clan’s population, the Wild Dancers now struggle to survive in the sands south of Tyr. Now, with hungry mouths to feed and few choices on how to accomplish this, the elves have turned to raiding.

The templars are men and women who have become the minions of the sorcerer-kings. They enforce the dictates of those willful tyrants with fanatical fervor in exchange for small scraps of personal power. The kings and queens they serve are the greatest spellcasters Athas has ever known.

After the demise of King Kalak, the templars of Tyr were left without magical abilities. Regardless, some templars have found imaginative ways to subvert the laws passed down by the Council to further their own ends. The templars continue to regulate iron and grain through Tyr. They practice the mechanics of oversight, and those who wish to see the wheels of progress turn must regularly grease the palms of those who turn the wheels.

In Urik, the law reigns supreme or so claims Hamanu. The Urikite code stands unsurpassed in the Tyr Region for utility, comprehensiveness, and ruthlessness. Hamanu’s templars are also known as Gray Blades and use the magic granted to them by the sorcerer-king to turn themselves into dangerously efficient combatants. The Gray Blades regularly stalk the Tyr Region searching for escaped slaves and easy targets for acquisition.

Unlike Athasian clerics, druids are solitary creatures. They live off the land, within the land, and they have sacrificed their entire lives for the land. But, unlike clerics, druids concentrate their considerable abilities in a single areatheir guarded lands. A barren stretch of desert, a sparse section of scrubland, or perhaps a sparkling oasis, that is the home of the druid, and his source of power. One small preserve, protected from the dark magic of the defilers.

The clerics and druids who inhabit the wastes of Athas do not pray to patron deities, for they have no deities. Priests beneath the dark sun pledge themselves to the very powers that dwell on the elemental planes.

Like the Athasian deserts, the elemental powers are neither benevolent nor malevolent, caring only that their natural forms are preserved in the material world.

This is the source of their power, and the impending ecological collapse in this realm has created an unusual and dynamic power struggle on the inner planes of the elementals. The priests of Athas are the pawns of this titanic struggle.

Resisting the efforts of the clerics and druids are the templars.

Escaped salves inevitably find other escaped slaves hiding in the desert. To survive, these groups of ex-slaves form tribes. There are hundreds of slave tribes scattered throughout the desert. Some tribes are nothing more than small groups of nomads who travel together from oasis to oasis. Others grow large and establish villages to protect themselves.

The Black Sand Raiders are the epitome of evil for those living outside the walls of the city-states. These raiders stop at nothing to take what they want, and they seem to revel in death and destruction. Their chaotic evil tendencies are barely contained by their leader, Zeburon, and his defiler wizard, Fevil.

Settled in the aptly-named Hidden Village (called “Freedom” by some), the Free believe that all slaves deserve to live in freedom. They follow this credo as long as doing so does not threaten their own freedom. They are a wild bunch, but they refrain from acts of true evil, attacking only those who keep slaves.

Making its home in the mountains near Altaruk, this violent tribe considers themselves at war with the city-states, a form of payback against their former masters. To other slaves, much of Sortar’s excessive violence can be forgiven, for it is directed at the city-states and others who keep slaves. Of course, as in any war, innocent suffer along with teh enemy, but Sortar and his troops do not go out of their way to slice up slave villages or to kill lone travelers for the amusement of his band.