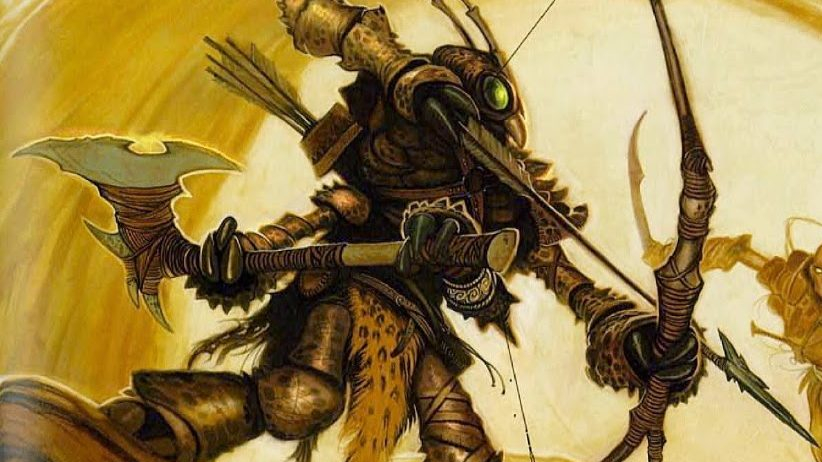 Thri-Kreen wander the deserts and scrublands of Athas. These insect-men stand as tall as 7 feet at the shoulder. Their survivability in the wilderness, combined with their cunning and intellect, have made the mantis warriors (as they are known to some races) the undisputed masters across large tracts of the Athasian wastes.

The individual thri-kreen is a six-limbed creature with a tough, sandy-yellow exoskeleton. Its hind legs are the most powerful, used for walking, running, and leaping. The four forward limbs each have a hand with three fingers and an opposable thumb. A thri-kreen’s exoskeleton is extremely hard, offering the creatures natural armor.

A thri-kreen’s head has two large eyes, two antennae, and a small-but-powerful jaw. The jaws work from side to side and have several small extensions that grab and manipulate food while it is being eaten. The eyes are jet black and multi-faceted, seperated to either side of the head.

All thri-kreen have the following racial traits.

Age. Thri-kreen live much shorter lives than their human and demi-human counterparts. A thri-kreen matures quickly, reaching adulthood within 3-4 years of hatching. Most thri-kreen only live to be 25 years old, although some live marginally longer.

Size. A full-grown thri-kreen stands seven feet tall but can be as long as 7 to 9 feet, and can weigh between 450 to 470 pounds. Your size is Medium.

Speed. Your base walking speed is 40 feet.

Chameleon Carapace. As a bonus action, you can change the color of your carapace to match the color and texture of your surroundings. When you do, you have advantage on Dexterity (Stealth) checks made to hide until the start of your next turn.

Secondary Arms. You have a shorter pair of arms in the center of your chest. Your smaller arms have a reach of 5 feet, and you can use them to lift a number of pounds equal to five times your Strength score. You can use these arms to do the following simple tasks: open or close a door or a container; grapple someone; or make an unarmed strike with your claws. Your claws as act as natural melee weapons, which you can use to make unarmed strikes. If you hit with them, you deal slashing damage equal to 1d4 + your Strength modifier, instead of the bludgeoning damage normal for an unarmed strike. Your secondary arms can’t wield weapons or shields or do anything that requires manual precision, such as using tools or magic items or performing the somatic components of a spell. Your GM might allow other simple tasks to be added to that list of options.

Sleepless. Thri-kreen do not require sleep and do not suffer exhaustion from lack of rest. When you take a long rest, you must spend at least six hours of it in an inactive, motionless state, rather than sleeping. In this state, you appear inert, but it doesn’t render you unconscious, and you can see and hear as normal.

Standing Leap. You can make a running long jump or a running high jump after moving only 5 feet on foot, rather than 10 feet.

Survivalist. You have proficiency in the Perception and Survival skills.

Languages. You can speak, read, and write Common and Thri-kreen.

A gythka is a two-handed wooden polearm with a blade at each end. Typically the blade is made of stone or obsidian, although metal gythkas are known to exist.

And a chatkcha is a flat, triangular wedge with three serrated blades (a light thrown weapon). Because of its unusual shape, only thri-kreen can properly operate the weapon. Any non-thri-kreen creature that attempts to use the chatkcha can only add half of its proficiency bonus to attack rolls made with the weapon.