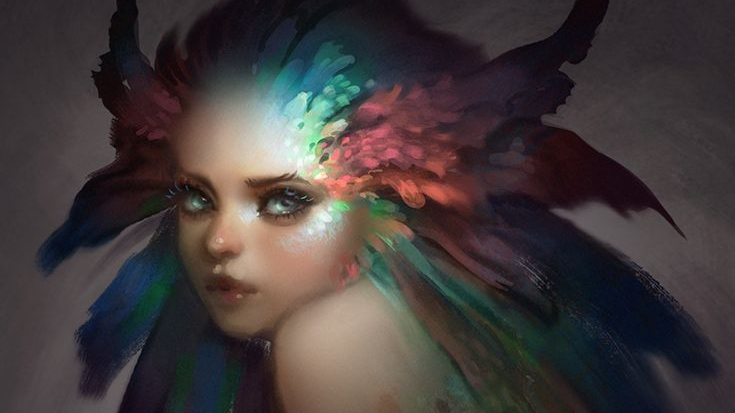 A fairy is a type of mythical being or legendary creature in folklore, a form of spirit, often described as metaphysical, supernatural, or preternatural.

Myths and stories about fairies do not have a single origin but are rather a collection of folk beliefs from disparate sources. Various folk theories about the origins of fairies include casting them as either demoted angels or demons, as spirits of the dead, as prehistoric precursors to humans, or as elementals.

The label of fairy has at times applied only to specific magical creatures with human appearance, small stature, magical powers, and a penchant for trickery. At other times it has been used to describe any magical creature, such as goblins and gnomes. Fairy has at times been used as an adjective, with a meaning equivalent to “enchanted” or “magical”.

A recurring motif of legends about fairies is the need to ward off fairies using protective charms. Common examples of such charms include church bells, wearing clothing inside out, four-leaf clover, and food. Fairies were also sometimes thought to haunt specific locations, and to lead travelers astray using will-o’-the-wisps.

Fairies are generally described as human in appearance and having magical powers. Diminutive fairies of various kinds have been reported through centuries, ranging from quite tiny to the size of a human child. These small sizes could be magically assumed, rather than constant. Some smaller fairies could expand their figures to imitate humans. Some depictions of fairies show them with footwear, others as barefoot. Wings are rare in folklore; fairies flew by means of magic, sometimes perched on ragwort stems or the backs of birds.

Your fey heritage manifests in a variety of traits you share with other fairies.

Age. Fairies mature at the same rate humans do, and most are considered adults by the time they reach 40 although they typically always maintain a childlike appearance. They can live 350 to almost 500 years.

Alignment. Fairies love their freedoms and are difficult to tie down with rules or laws, so they tend towards chaos. Many fairies are good-hearted, but there are some who are seen as more vicious than playful.

Size. Fairies look like human or elven children. They stand 2 to 3 feet tall in height and weigh between 25 and 35 pounds. Your size is Small.

Speed. Your base walking speed is 25 feet.

Fairy Dust. You can create fairy dust that creates various magical effects. To use the fairy dust, you must sprinkle it on yourself or on a target within 5 feet of you. Beyond the fairy dust itself, these effects do not require any other material or somatic components. If your hit points fall below half your maximum, you can no longer use your Fairy Dust trait until you regain enough hit points to put you back over half your hit point maximum. Charisma is your spellcasting ability for these effects.

Pleasant. You gain proficiency in the Persuasion skill.

Heart Sight. If you touch a creature, you can magically detect its current emotional state. If the target fails a Charisma saving throw with a DC of 8 + your Charisma modifier + your proficiency bonus, you also know the creature’s alignment. Celestials, fiends, and undead automatically fail this saving throw.

Languages. You can speak, read, and write Common and Sylvan.

Not only do I constantly create content like this (regardless of the current contest haha) I also have a huge dungeon I’m working on. You can get a copy of the first part of the dungeon FOR FREE when you sign up to the newsletter.

Art by Selenada on Deviant Art.