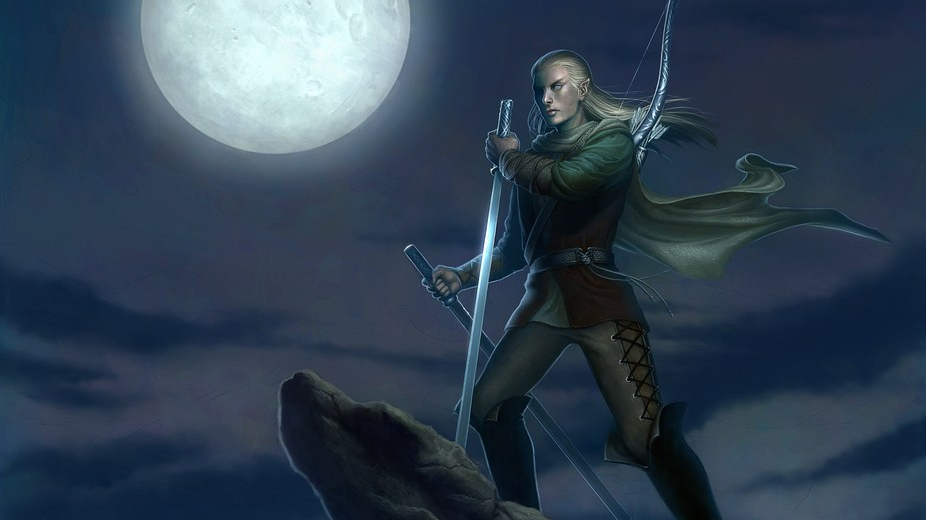 Currently, I’m working towards the February book which is titled Creaturepedia: Monsters of the Ninth Kingdom Vol 1. It will include a number of monsters that I’ve created for the Patron-sourced campaign setting, Wandrossa. In addition to the monsters, the book will include a few subclasses, too.

Following a poll on my Patreon, these are the classes that the worldbuilders said they wanted to see made:

In addition, I’m tossing in a secret subclass that will come out only with the book.

Back in third edition, the Oriental Adventures samurai class was waaay better. Basically, you got a special heirloom weapon which leveled up as you did. I think. At least, that’s how I want to remember it. And that’s more or less what I want to do with this build.

Here is what I hope to accomplish:

I think I got the balance of this one just right, but I’m sure I’ll get some feedback telling me otherwise. Overall, I wanted this archetype to support three different types of fighters: a stealth fighter, one that is sort of “holy”, and an “over-the-top” powerful model.

Here are my notes on balancing for each of the features. Feel free to give your own feedback on each:

Let me know what you think. Looking forward to your feedback!

At 3rd level, a fighter gains the Martial Archetype feature. The following Ancient Weapon Master option is available to a fighter, in addition to those normally offered.

Some fighters specialize in multiple weapons. Others are practitioners of the bow. And then, there are those who develop a kinship with a single weapon, that chosen weapon becoming an extension of the fighter itself.

As an ancient weapon master, you have selected a weapon to develop a bond with. Through your travels, you and the chosen weapon grow as one. In time, it is less a weapon, and more a partner; perhaps it is even like family.

When you choose this archetype at 3rd level, you gain proficiency with the History skill and smith’s tools.

When you select this archetype at 3rd level, you can attune to a weapon of your choice, making it your chosen weapon. To do so, you must conduct an hour-long ritual that binds you to that weapon. Once the hour ends, the chosen weapon takes on a dull blue glow, emitting dim light in a 10-foot sphere. As a bonus action, you can deactivate or reactivate this light.

Any creature other than you that makes an attack with your chosen weapon does so with disadvantage.

You may only have one chosen weapon at a time. If you perform this ritual again on another weapon, the chosen weapon status of the first weapon is removed and reapplied to the new weapon.

As a bonus action on your turn, you can empower your chosen weapon. While empowered, your chosen weapon deals an additional 1d4 damage on a hit. In addition, you also gain a +1 bonus to your AC. The bonus to your AC increases when you reach certain levels in this class, increasing to +2 at 10th level, and +3 at 15th level. These effects last until the start of your next turn.

You can use this feature three times, and you regain all expended uses of it when you finish a long rest.

Starting at 7th level, unless it is already a magical weapon, your chosen weapon counts as magical for the purpose of overcoming resistance and immunity to nonmagical attacks and damage. In addition, you gain one of the following benefits of your choice.

Dispelling Strike. Immediately after you use the Attack action on your turn and successfully hit a creature or object with your chosen weapon, you can end the effect of any spell of 3rd level or lower on the target. Once you use this feature, you can’t use it again until you finish a long rest.

Out of Sight. As an action on your turn, you can turn invisible as long as you are carrying your chosen weapon. This invisibility lasts for 1 minute, or until you attack or cast a spell. Once you use this feature, you can’t use it again until you finish a long rest.

Starting at 10th level, when you roll initiative and have no uses of Martial Symbiosis remaining, you regain one use.

Starting at 15th level, the attacks you make with your chosen weapon have the potential of disorienting your targets. When you hit a creature with an attack using your chosen weapon, that target must succeed on a Wisdom saving throw (DC 8 + your proficiency bonus + your Wisdom modifier) or the target has disadvantage on its attack rolls until the end of your next turn. If the creature succeeds on its saving throw or the effect ends for it, it is immune to this effect for 24 hours. You can use this feature only once on each of your turns.

At 18th level, you gain one of the following features of your choice.

Avatar of Destruction. While you are wielding your chosen weapon, as a bonus action on your turn you can transform into an Avatar of Destruction. You take on a fearsome appearance, which gives you advantage on Charisma (Intimidation) checks. Plus, you gain a fly speed of 30 feet. If you fly and dive at least 30 feet straight toward a target and then hit it with your chosen weapon, the attack deals an extra 2d6 damage to the target. This effect lasts for 1 minute or until you use your bonus action to dismiss it. Once you use this feature, you can’t use it again until you finish a long rest.

Ghostwalk. While you are wielding your chosen weapon, as a bonus action on your turn you become incorporeal and can teleport up to 60 feet to an unoccupied space that you can see. In your incorporeal state, you gain immunity to bludgeoning, piercing, and slashing damage from nonmagical attacks and you have advantage on Dexterity saving throws. Other objects and creature can move through you as if you were difficult terrain. You remain incorporeal until the start of your next turn or until you move or take an action or reaction. Once you use this feature, you can’t use it again until you finish a long rest.

Legendary Radiance. As a bonus action on your turn, you can cause your chosen weapon to glow with radiant energy. Your weapon casts bright light in a 30-foot radius sphere and dim light for an additional 30 feet. While your chosen weapon glows, undead and fiends have disadvantage on their saving throws and invisible creatures become visible within 30 feet of you. If you hit a creature with your chosen weapon while it is glowing, it deals an extra 1d6 radiant damage. This effect lasts for 1 minute or until you use your bonus action to dismiss it. Once you use this feature, you can’t use it again until you finish a long rest.

EVIL is now on sale.

The first compendium of 2019 is already up and for sale on the site. It includes 17 new subclasses, 3 new playable races, 16 new monsters, 4 new spells, advanced weapons rules, and a whole lot more. It’s 56 pages of original Fifth Edition content.

Check out a FREE sample of the content here on the site.