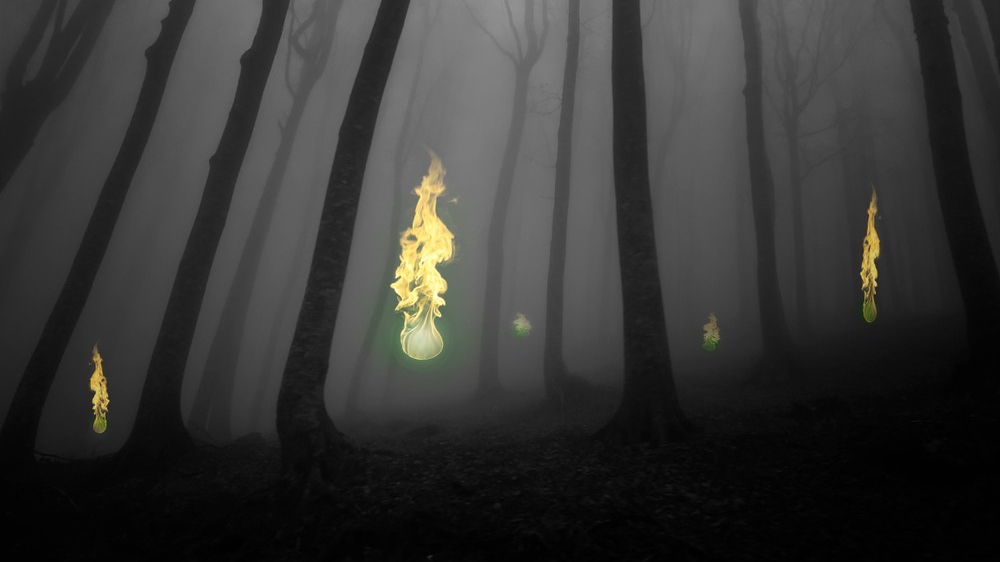 Here is a monster request from Patron Gilyth:

People always fear getting lost in the forest, so how about a Will O’ Wisp type creature that causes people to get stuck inside the forest; so rather than leading people to their deaths it causes creatures inside the forest to get turned around and find themselves lost and always returning to the same spot where they met the creature (whether they know they met it or not)

Expanding on this idea, the creature could be some sort of lonely fey trapping people in the forest

Ooo, neat. A will-o’-wisp that’s just an a-hole fey. Haha! I think I can swing that. I have a good idea for how its mechanics can work, too.

Illumination. The malvetoil sheds bright light in a 10-foot radius and dim light for an additional 10 feet.

Song of the Trees. Each creature that starts its turn within 30 feet of the malvetoil and can hear it must make a DC 13 Wisdom saving throw. On a failed save, the creature contracts the Curse of the Lost. The cursed target automatically fails all Wisdom (Survival) checks made to navigate, track, and forage while within 1 mile of the malvetoil. In addition, the creature cannot recognize or read maps.

While a creature remains cursed, it becomes frustrated and distraught and can’t comfortably rest until it finds its way out. If a cursed creature attempts to take a short or long rest it must make a DC 13 Wisdom saving throw. On a failed save, the creature cannot rest and must continue traveling, even if it means taking a level of exhaustion. On a successful saving throw, the creature can rest as normal but has nightmares of being lost forever in the wilderness. If a cursed creature dies from taking too many levels of exhaustion, the wilderness absorbs it. 1d4 days later a tree grows in the spot where the creature died with its screaming face in the wood.

The curse lasts until removed by the remove curse spell or other magic, or if the creature moves more than 1 mile away from the malvetoil that cursed it.

Help us build a world!