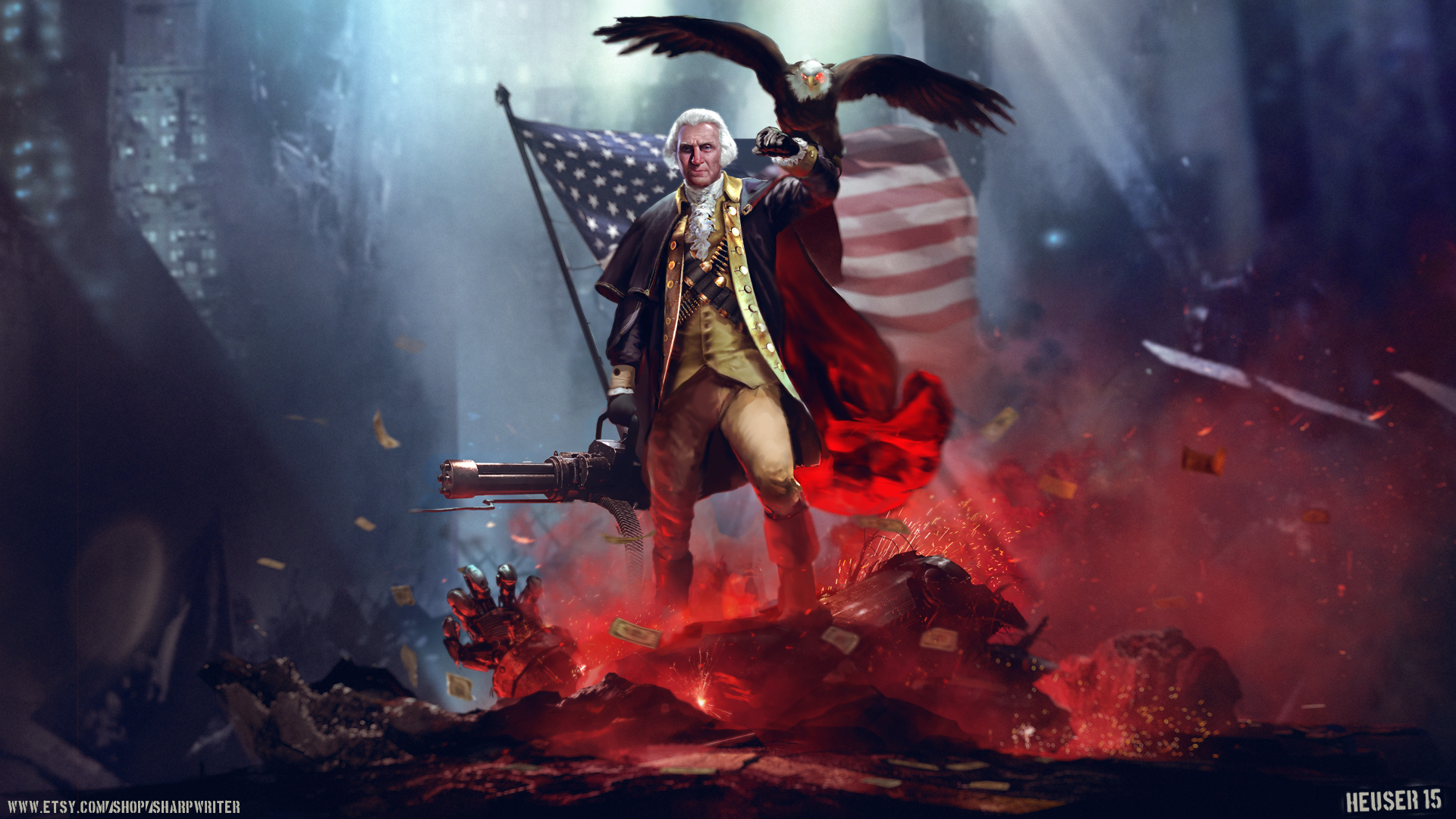 Today is the day that George Washington phased into the Prime Material plane, gunned down 2 million Brits and like 100 Hessians with a chain gun (in just one fucking round), then rode off on a T-Rex.

Oh yeah, and he signed the Declaration of Independence LIKE A BOSS.

Here are some stats for him in Fifth Edition.

Oh, and check out Sharp Writer’s store on Etsy. He’s the dude that made the George Washington painting pictured and he’s fucking AMAZING.

Honest AF. George knows if he hears a lie.

Legendary Resistance (3/Day). If George fails a saving throw, he can choose to succeed instead.

Made in America. George’s weapon attacks are magical. When George hits with any weapon, the weapon deals an extra 8d8 radiant damage (included in the attack).

Magic Resistance. George has advantage on saving throws against spells and other magical effects.

Spray. George targets a point that he can see within 80 feet of him. Each creature in a 10-foot cube area centered on that point must succeed on a DC 15 Dexterity saving throw or take 26 (4d8 + 8) piercing damage plus 36 (8d8) radiant damage. After George uses this action, he can’t use this action or his chaingun again until he uses his bonus action to reload it.

Leadership (Recharges after a Short or Long Rest). For 1 minute, George can utter a special command or warning whenever a nonhostile creature that he can see within 30 feet of him makes an attack roll or saving throw. The creature can add a d6 to its roll provided it can hear and understand George. A creature can benefit from only one Leadership die at a time. This effect ends if George is incapacitated.

Parry. George adds 7 to his AC against one melee attack that would hit him. To do so, George must see the attacker and be wielding a melee weapon.

Crossing the Delaware. George and up to five creatures of his choice within 10 feet of him magically teleport, along with any equipment they are wearing or carrying, up to 60 feet to an unoccupied space he can see. When he uses this effect against an unwilling creature, the creature must make a DC 25 Charisma saving throw. If the creature fails its save, it is teleported.

God Bless America (Costs 2 Actions). George screams some patriotic shit at his foes. Each creature of George’s choice in a 15-foot radius must make a DC 23 Constitution saving throw, taking 14 (4d6) thunder damage plus 14 (4d6) radiant damage on a failed save, or half as much damage on a successful one.

Fucking Eye Lasers (Costs 3 Actions). George focuses his gaze on a target that he can see within 100 feet of him. If the target is a creature, it must succeed on a DC 23 Dexterity saving throw or take 45 (10d8) force damage. If this damage reduces the creature to 0 hit points, its body becomes a pile of fine gray dust that smells a bit like apple pie.

Want this in PDF? Get it here!