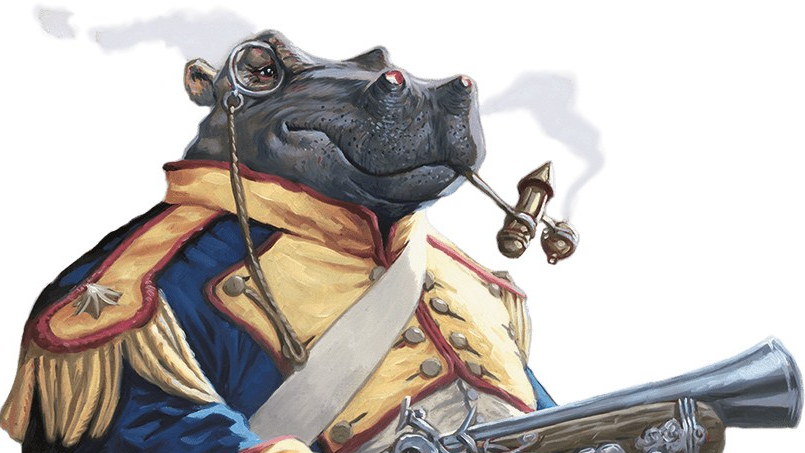 Ever since they resurfaced in Mordenkainen’s Tome of Foes, Dungeons & Dragons fans have been clamoring for a playable giff race. And well? It’s time I delivered that.

This was a relatively simple build all things considered. Using the “3 ASI” rule for building races (where the racial traits equal 3 ASIs or feats worth of benefits), I was able to recreate the race fairly easily based on the MToF monsters stat block.

What is a Giff?

It’s easy to spot the giff in a room: a group of 7-foot tall, hippopotamus-headed humanoids attired in gaudy military uniforms, with gleaming pistols and muskets on display. These spacefaring mercenaries are renowned for their martial training and their love of explosives.

Every aspect of giff society is organized along military lines. From b\irth until death, every giff has a military rank. It must follow orders from those of superior rank, and it can give orders to those granted by a superior as a reward for valor. Giff are devoted to their children, even as most of their education is geared toward fighting and war.

Giff are in high demand as warriors for hire, but they insist on serving in units composed entirely of giff; a giff hiring itself out individually is unheard of. Giff refuse to fight other giff, and will never agree to a contract unless it stipulates that they can sit out a battle rather than wage war against their kin. A giff prizes the reputation of its unit above its own life. Life is fleeting, but the regiment endures for generations or even centuries.

A Whiff of Gunpowder

Muskets and grenades are the favorite weapons of every giff. The bigger the boom, the brighter the flash and the thicker the smoke it produces, the more giff love a weapon. Their skill with gunpowder is another reason for their popularity as mercenaries. Giff revel in the challenge of building a bomb big enough to level a fortification. They gladly accept payment in kegs of gunpowder in preference to gold, gems, or other currency.

No Honor in Magic

Some giff become wizards, clerics, and other kinds of spellcasters, but they’re so infrequent that most giff mercenary units have no magical capability. Typical giff are as smart as the average human, but their focus on military training to the exclusion of all other areas of study can make them seem dull-witted to those who have more varied interests.

As a giff, you have the following characteristics with all other giff.

Age. Giff mature at roughly the same rate humans do, becoming adults in their late teens. However, giff have shorter lifespans on average, generally living no longer than 70-80 cycles.

Alignment. Giff have a strict adherence to the law, thanks to their militaristic tendencies. To them, the tenets of law are held above all morals. The only good and evil, in their minds, are those who dare betray giff overall. Of course, there are always exceptions, but they are quite rare.

Size. Giff are quite tall, standing 7 – 8 feet on average, and incredibly stocky. The average giff can weigh as much as 850 – 1,000 pounds. Your size is Medium.

Headfirst Charge.  You can use your action to make a special attack with your hippo-like head. If you move at least 10 feet in a straight line that ends within 5 feet of a Large or smaller creature before you use this action, that creature must succeed on a Strength saving throw with a DC equal to 8 + your Strength modifier + your proficiency bonus or take 7 (2d6) bludgeoning damage and be knocked prone.

Firearms Knowledge. You are proficient with muskets and pistols. Additionally, you ignore the loading property of these weapons.

Languages. You can speak, read, and write Common and one extra language of your choice.

I’m pumped to be starting a Spelljammer campaign, which starts this Saturday. So I’m probably going to be converting a whole bunch of stuff over from 2nd edition into 5th edition.

But for now, at least, you’ve got giff to add to your racial repertoire.

Next: Dracons for Fifth Edition.

Art and fluff text by Wizards of the Coast.