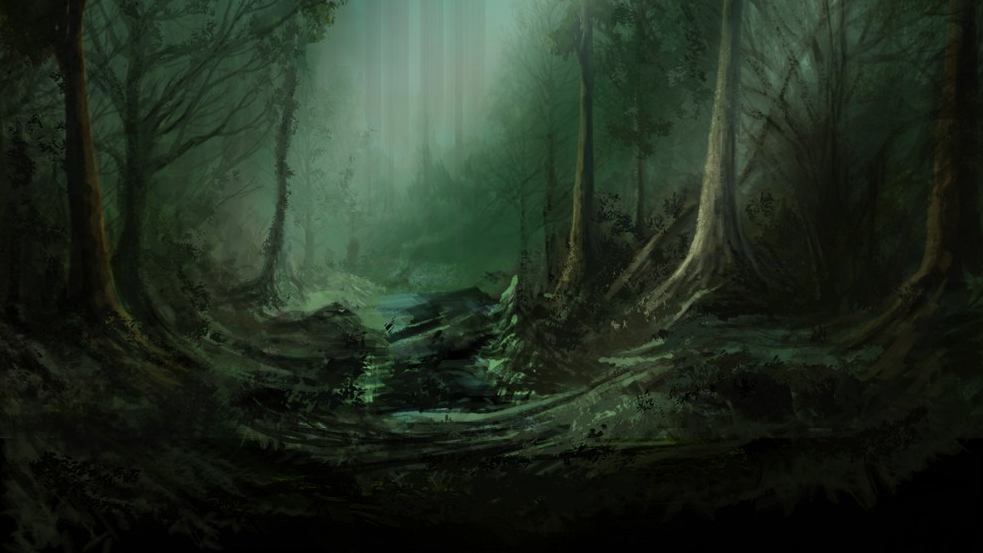 This one comes as a request from one of my Patrons and it’s part of the Gods of Wandrossa content that I have there on Patreon. The Spellbound Woods are a section south of a mountainous region known as the Drakecrags. It’s a magical forest guarded by a large wolf named Goliath.

Interested in having your adventures custom made? Become a DMDave patron! It’s only $3 to join and have requests made!

In this portion of the adventure creation, I like to first plan everything out. This helps me formulate a synopsis as well as adventure hooks, plus make sure the entire adventure is mathematically sound.

Before I start, there are a few things that I want to try to do with this adventure:

Using the DMG to plan adventures.

This may surprise some folks, but I really enjoy using the random tables for adventure creation found in the Dungeon Masters’ Guide.

Here are the guidelines for creating event-based adventures:

Our adventure needs a bad guy. I can use the charts in the DMG.

Those are the characteristics of the villain. Next, I’ll want to know the villain’s actual scheme and methods.

Since our villain is a little more grounded in reality–and this is only level 5–there’s probably no need for a villain’s weakness. If anything, its bonds and flaws could be its weaknesses. Those on the chart on page 96 of the DMG tend to be a bit more high concept.

Now we have the basic ideas of our villain, it’s time to figure out how our villain is trying to achieve his/her goals.

The villain commits a single crime and then tries to avoid the consequences. Instead of an ongoing plan to commit more crimes, the villain’s goal is to lie low or flee the scene.

Basically, the villain assassinated someone in order to steal land. And now they’re trying to cover their tracks. Of course, this could lead to further murders and crimes.

So how does the party get involved?

Now we know that the villain used unusual means to cover their tracts. Of course, if the assassination occurred in the Spellbound Forest, that would make a lot of sense. It’s a strange place filled with magic.

We know our villain. But who are the other people involved in this mystery? Based on the elements we have so far–and referencing the section on mysteries–we know that we’ll need at least a victim and then, some suspects.  Plus, we’ll need a patron to get the PC’s involved with this mystery.

Victim. Someone who had something that the villain wanted. I think a magic item would be cool, something important. Possibly even a special map leading to a great treasure. That would make for a great lead into the next adventure.

Suspects. We know our villain has a powerful enemy. Perhaps the enemy could even be the temple official? A priest of Indronyx, perhaps? So that’s one big lead. Also, I see this adventure kicking off at the town of Tamor. So there’s plenty of surly types that live and operate out of there including Boss Glass, an old earth elemental crime boss, and a number of vampires. These all make for good suspects. I think four or five suspects would be good. Plus, those could lead to additional encounters.

As the adventurers pursue their goals and foil the villain’s plans, how does the villain respond? I see the villain as already being pretty far ahead. And the PC’s are just starting to pick up on its tracks. Perhaps the villain even faked his or her own death, and the PCs don’t realize that the person is still alive? The villain’s strong connection to his/her family and loved one makes it easier for them to follow. In addition, the adventurers are being tailed by the temple official who doesn’t completely trust the PCs. So the PCs may even be caught between two villains here.

Obviously, we know that the Spellbound Woods is a key location. And this adventure will serve as an introduction there. I see the last half of the adventure being set there.

And the adventure will start at The Sorcerous Town of Tamor. Tamor is populated by vampires that possess a lot of sorcery powers (probably a lead-in to create a Blood Magic Sorcerous Origin later on, eh?). They spent the last few decades battling a solar gone mad, but the solar’s now gone and it’s become a major trade hub.

Once the adventurers get the lead, they head east following the trail of the missing persons (the victim and the villain). It’s about a 48-mile journey from Tamor to Spellbound Woods, so there’s bound (no pun intended) to be some interesting stuff along the way. I’ll probably want a few more spots along the way for encounter opportunities, side quests, and other interesting hooks. Here are a few ideas:

So there’s a lot of good stuff to work with here.

7 – Choose an introduction and a climax.

Now we just need our start and finish. I’ve already got the start: I want the temple patron to contact the adventurers to discover what happened to the victim and the villain.

As for the climax:

It’s an awakened forest, therefore, it makes sense to have the actual forest attacking during the main event.

Finally, I need to plan the encounters. As I noted above, in order for a group of characters to get to 6th-level with this adventure, they will need to have roughly 12 encounters, each one worth an average of 625 experience (Medium Encounter Difficulty).

First, there will be the villain itself. That should be a deadly encounter worth 1,100 experience per character.

Next, I know that I want there to be someone pursuing the adventurers while they are on their quest. So we need something for that. That can probably be a Hard or Deadly encounter, too, worth 750 – 1,100 experience points per character.

This leaves me with 5,300 more experience. I’ll make about 20% of the total experience for traps and non-combat encounters, so that’s 1,500 worth there. I think two “Dangerous” traps would be good to throw in there. So that’s four encounters. I need to make up eight more with a budget of 3,800 experience.

I think I’ll turn to more random tables for that.

I’ve hit the budget. But with an event-based encounter, there’s always a chance that the characters could miss a few things. So I’ll toss in four more.

I think this is a pretty good balance of cool elements. Of course, I’m likely to make adjustments and add in some other cool things.

But this is the making for a good story–enough to write a synopsis and background at least.

Interested in having your Fifth Edition adventures custom made? Become a DMDave patron! It’s only $3 to join and have requests made!

Next up: writing a synopsis and a background for a Fifth Edition adventure.