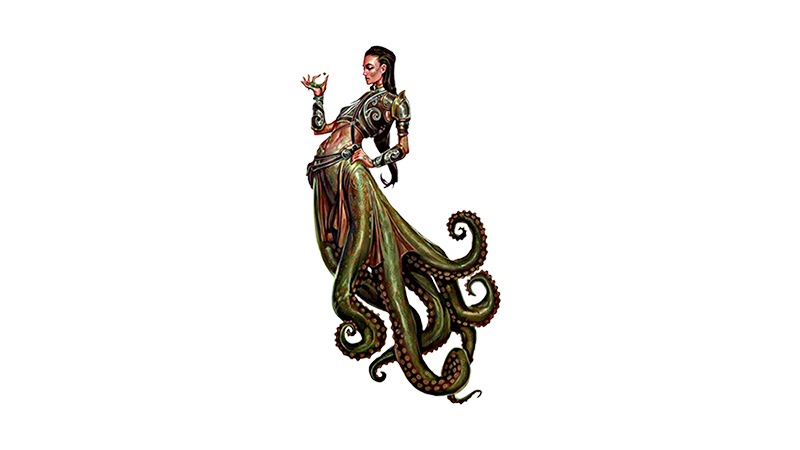 Octopodes are intelligent, space-faring half-octopus humanoids. They appear to be human or elven from the waist up, with only a few features that may reveal their demihuman nature: purplish or grayish skin, spots, or even rocky ridges along their back and base of their neck. From the waist down, octopodes have eight tentacles arranged in a pattern similar to those of a mundane octopus.

Octopodes are extraordinarily inquisitive beings. Once their curiosity sets its sight on something, it’s hard to shake them of this interest. Some see this singular devotion to a subject as cold and callous, as an octopode tends to ignore moral and ethical consequences when pursuing their interests. However, octopodes believe that their work–no matter who gets harmed along the way–is for the greater good of all creatures across the multiverse.

While the true origins of mindflayers and octopodes remain a mystery, it’s commonly believed that the two species share a common ancestor. Oddly, the two species rarely cross paths, and when they do, they mostly react towards one another with apathy and occasionally passing curiosity. Fortunately, octopodes don’t share the same interest in enslaving lesser beings that mindflayers do. Unless, of course, it serves their interests.

While octopodes are rarely motivated to conquer or establish colonies, they do enjoy trading in objects that they desire, especially those that pique their unique interests. Nearly every water-based planet in the multiverse has a presence of octopodes in some form or another. In addition, octopodes are incredibly proficient at getting whatever is needed to make a trade go through. However, should trade relations turn sour, octopodes are quick to threaten and attack.

As an octopode, you have the following characteristics in common with all other octopodes:

Age. Octopodes mature extraordinarily fast, reaching adulthood when they are only ten years of age. They also live shorter lives than most other humanoid species, typically living no longer than 30 years.

Alignment. Octopodes rarely consider the ramifications of their own actions beyond their obsessive interests. For this reason, most octopodes are true neutral.

Size. Octopodes vary widely in height and build. The shortest octopodes stand just under 5 feet tall, while some of the tallest can be up to 7 feet. They are often dense, weighing a little more than humans of the same height. Your size is Medium.

Amphibious. You can breathe both air and water.

Darkvision. Accustomed to life in trenches and deepwater areas, you have superior vision in dark and dim conditions. You can see in dim light within 60 feet of you as if it were bright light, and in darkness as if it were dim light. You can’t discern color in darkness, only shades of gray.

Tentacles. In addition to your humanoid arms, you have eight tentacles which replace your legs.

Underwater Camouflage. You have advantage on Dexterity (Stealth) checks made while underwater.

Languages. You can speak, read, and write Common, Aquan, and one other language of your choice.

I’m on a spelljammer kick lately, so I’m going to continue to make some weirdo races. If you haven’t already seen it, check out giff race. Next, I’ll probably make the dracon. But who knows? I’m ADD AF. 🙂