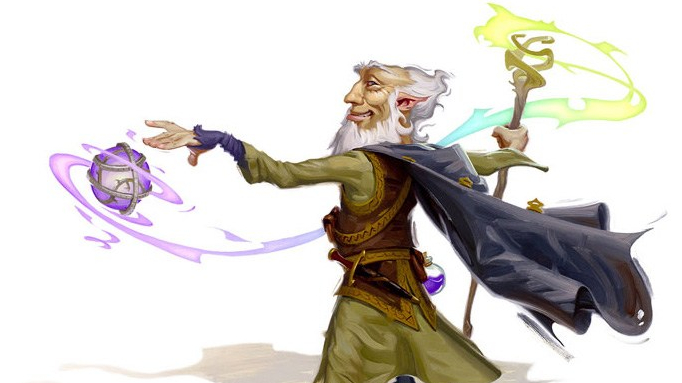 Glymm is the leader of the gnome technicians and the chief pilot of the Colossus. He has Xentarich’s respect for his technical prowess. Glymm often plays practical jokes on the bugbears (particularly with his bag of tricks) so they hate the small illusionist (and might even attempt to slay him in a particularly chaotic battle). Khrull resents Glymm and the control he has over the Colossus, but he also recognizes his value and won’t’ betray the gnome. Glymm is not evil, but if the control room is attacked he defends it to avoid losing control of the “ship” (as he calls it).

Special Equipment. Glymm wears bracers of defense, a ring of protection, and a cape of the mountebank, plus he is wielding a wand of magic missile. He is carrying a potion of cure moderate wounds, potion of gaseous form, as well as two scrolls of fireball and a scroll of conjure elemental.

Artificer’s Lore. Whenever Glymm makes an Intelligence (History) check related to magic items, alchemical objects, or technological devices, he can add +4 to the roll.

Gnome Cunning. Glymm has advantage on all Intelligence, Wisdom, and Charisma saving throws against magic.

Legendary Resistance (3/day). If Glymm fails a saving throw, he can choose to succeed instead.

Spellcasting. Glymm is a 10th-level spellcaster. His spellcasting ability is Intelligence (spell save DC 17, +9 to hit with spell attacks). Glymm has the following wizard spells prepared:

Displacement (Recharges after Glymm Casts an Illusion Spell of 1st Level or Higher). As a bonus action, Glymm projects an illusion that makes him appear to be standing in a place a few inches from his actual location, causing any creature to have disadvantage on attack rolls against him. The effect ends if Glymm takes damage, he is incapacitated, or his speed becomes 0.

Move. Glymm moves up to half his speed.

Glymm is featured in the ‘Heart of the Iron God’ adventure.