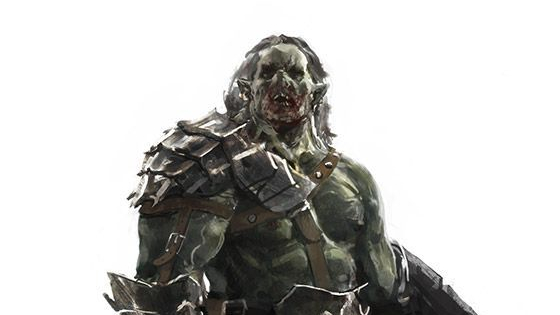 Khrull is an agent sent by the church of Erythnul to ensure that Xentarich does not stray from his mission of destruction. This is a source of conflict between the two, in that Xentarich prefers destruction only where it is profitable. Khrull does not get on well with the crew except for the Storm Hammers, whose destructive tastes nearly rival Khrull’s own. Against a common threat, Khrull drops his dislikes and fights against any intruders in the Colossus, although he stands aside if the chaos beast managers to get loose and track Xentarich down. The half-orc spends most of his time in area 25 with Clymm watching the land pass by below and subtly observing the gnome, hoping to glean some understanding of the Colossus’s workings.

Special Equipment. Khrull is wearing +1 half-plate, a cloak of protection, and uses a +1 shield. He wields an unholy mace. Also, Khrull carries three potions of healing.

Spellcasting. Khrull is a 10th-level spellcaster. His spellcasting ability is Wisdom (spell save DC 17, +9 to hit with spell attacks). He has the following cleric spells prepared:

Touch of Death (1/Day). When Khrull hits a creature with a melee attack, he can choose to deal an extra 25 necrotic damage to the target.

Khrull is featured in the adventure ‘Heart of the Iron God.’