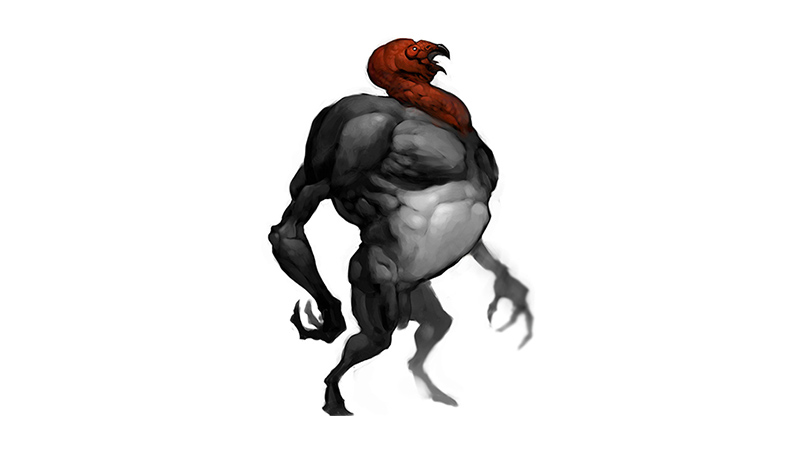 Hags are unusual creatures. While they’re well known for capturing babies and luring lost travelers into their shacks, they also enjoy twisting popular holidays to torment locals. That’s how the gobble-lin came to be.

Originally a tribe of downtrodden goblins that lived just outside of the hag’s perimeter, a spiteful witch named Ugly Bess cut a deal with their boss. The goblins would gain immense power, but could only use that power on one day of the year: Highharvesttide. The goblins would shed their mortal forms and become horrific bird creatures that resembled well-muscled turkey humanoids.

These “gobble-lins”, as the hags playfully nicknamed them, used to raid local towns and villages celebrating Highharvesttide. After a few years of this, a band of adventurers took it upon themselves to rid the forest of the shapechanging gobble-lins the day following a Highharvesttide. The villagers have given thanks to those adventurers on the day after Highharvesttide ever since, calling it Thankskilling.

Shapechanger. The gobble-lin can use its action to polymorph into a goblin-humanoid hybrid or back into its true form, which is goblin. Its statistics, other than its AC, are the same in each form. Any equipment it is wearing or carrying isn’t transformed. It reverts to its true form if it dies.

Short Range Flight (Hybrid Form Only). The gobble-lin’s long jump is up to 30 feet with or without a running start.

Nimble Escape. The gobble-lin can take the Disengage or Hide action as a bonus action on each of its turns.

Multiattack (Hybrid Form Only). The gobble-lin makes two attacks: one with its bite and one with its scimitar.

Bite (Hybrid Form Only). Melee Weapon Attack: +5 to hit, reach 5 ft., one creature. Hit: 6 (1d6 + 3) piercing damage, and the target must succeed on a DC 12 Constitution saving throw or magically fall asleep. The target remains unconscious for 1 minute until it takes damage, or someone uses an action to shake or slap the sleeper awake.

Have a great holiday everyone! And if you haven’t heard already, I’ve got a Facebook that I’ve just started up that should have some new content on it. So check me out at Dungeon Master Dave on Facebook.

Thanks to all who voted in yesterday’s Instagram poll for the challenge rating on the image you can see above.

And a big shout out to Instagram user @zackattackjw who coined the term “Gobble-lin.” I love it! Had the creature’s CR been north of 10, I probably would have gone with “Turkey-asque” but I digress.