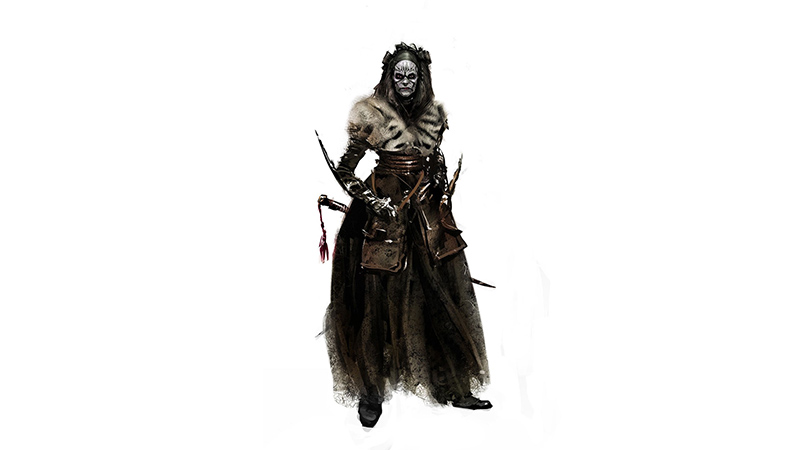 Continuing my conversion of old Ravenloft monsters, here are a few more uglies from the Dread Realms to populate your Dungeons & Dragons Fifth Edition campaigns.

Flavor text is taken from the original supplements from whence it came (property Wizards of the Coast). Conversions by me, DM Dave.

The aboriginal witch Mullonga is one of the most active members of the Nightmare Court. She may look like an old woman who is so small as to be harmless, but she is evil and malicious. She thrives on the fear and apprehension of others.

Mullonga appears as a hunched, leathery, brown-skinned old woman dressed in animal skins and carrying a gnarled staff. Her flesh looks as if it has been parched in the hottest desert, beneath a blazing, unforgiving sun. As no visible sun shines over the Nightmare Lands, perhaps it is the pure evil that emanates from this witch that withers her flesh so.

Her connection to the dream plane gives Mullonga access to many languages, all of which are spoken with a voice as dry and brittle as a mummy’s wrappings.

Ruler of Nod’s Ghettoes. Mullonga controls the Ghettoes in the City of Nod. The shifting streets of this roving neighborhood are an extension of the witch.

In the Ghettoes, Mullonga has a number of workshops where she can conduct her arcane experiments. These experiments have seen the creation of the arcane heads and other terrors that now serve the witch. Of course, the Ghettoes are also haunted by things that did not turn out the way the witch had planned.

Fueled by Nightmares. Mullonga thrives on fear, and her dream-scapes are sinister terror-filled locations. In the Terrain Between, she constantly searches for wanderers to fuel her arcane powers.

Aura of Extreme Fear. Mullonga exudes an aura of fear in a 60-foot radius. All creatures in this area must succeed on a DC 19 Wisdom saving throw or become frightened for 1 minute. A creature frightened in this way is paralyzed. The target may repeat its saving throw at the end of each of its turns, ending the effect on itself with a success. A creature that succeeds on its saving throw or the effect ends for it is immune to Mullonga’s Aura of Extreme Fear for 24 hours.

Legendary Resistance (3/day). If Mullonga fails a saving throw, she can choose to succeed instead.

Magic Resistance. Mullonga has advantage on saving throws against spells and other magical effects.

Move. Mullonga moves up to her speed without provoking opportunity attacks.

In all of Ravenloft, no place reveres the tombs of its dead more highly than Har’Akir. Recently, the priests of this desert realm have found deadly wardens for the tombs of their pharaohs: shadow asps.

Shadow asps appear to be slender snakes composed of pure darkness. They seem to have no physical form, but look as if they are nothing more than an extension of the shadows that give them their name. Although these creatures are barely intelligent, they instinctively lash out at those who intrude upon the tombs they live in.

Shadow asps make no sound, not even a hiss or slithering, as they move.

Unnatural Origin. Shadow asps are magical creatures summoned by the priests of certain gods worshiped in Har’Akir (Osiris, Set, or Nephythys). The ceremony by which these creatures are called into existence is a tightly guarded secret.

Shadow asps are very territorial. They slither about the place where they were summoned and maintain a constant vigil against the intrusions of potential grave robbers or defilers.

Because they turn their victims into shadows, there is a 40% chance of finding 1d6 shadows with any group of shadow asps.

Created for Death. Shadow asps are not a part of the physical world. Because of their extradimensional origins, they play no part in the grand scheme of nature apart from bringing death to their victims and creating undead shadows.

Shadow Invisibility. While in dim light or darkness, the swarm is invisible. The invisibility lasts until the shadow asps are in bright light.

Bites. Melee Weapon Attack: +7 to hit, range 0 ft., one target in the swarms’ space. Hit: 14 (4d6) piercing damage, or 7 (2d6) piercing damage if the swarm has half its hit points or fewer. If the target is a creature, its Strength score is reduced by 1d4. The target dies if this reduces its Strength to 0. Otherwise, the reduction lasts until the target has a remove curse spell or similar magic cast upon it. A humanoid that dies from this attack immediately rises as a shadow.

Few creatures are as equally beauteous and deadly as the dreaded Venus weed. Seemingly a nightmare hybrid of a human woman and plant, the Venus weed lures unwary creatures to feed on their blood.

The Venus weed resembles an oversized rose bush, complete with wicked thorns. The plant has only a single flower, but that rose is enormous, nearly 4’ in diameter. When this snow-white rose opens, a beautiful human woman is revealed. The woman is unclothed and voluptuous, with long, strawberry-blond hair. Her pale skin is flawless, and her emerald green eyes sparkle with the promise of wicked delights. Unfortunately for the Venus weed’s victims, the “woman” is merely a specialized vegetable structure, intended to lure them close enough for the plant to attack. The woman lacks legs, and her hips are rooted at the center of the flower.

Venus weeds cannot speak to other creatures, though they understand speech, and are not completely mute themselves. The woman at the center of the plant’s flower can utter noises, though usually this is limited to sighs of contentment (when seducing a victim) or shrieks of rage (when the plant is attacked). Venus weeds are highly intelligent, and communication can be established with them through the speak with plants spell.

Appetite for Blood. Venus weeds can survive in any wild, temperate area, though they grow particularly well in nutrient-poor soils where most plants would be stunted. Though they can survive on the blood of any mammal that wanders too close, Venus weeds seem to prefer a diet of human blood. They often grow far enough from settlements that they cannot be discovered easily, yet close enough to ensure a steady traffic of victims. Venus weeds are sometimes found growing alongside bloodroses.

Many occult scholars believe that the Venus weed is the product of a mundane rose bush that was watered daily with fresh blood by a hag inclined towards “experimental horticulture”. Though Venus weeds now mainly reproduce like normal flowering plants, it is thought that watering a rose in such a manner could produce a new Venus weed in time.

Dark Alliances. Like other carnivorous plants, Venus weeds rely on digested organic matter – in this case, blood – for the nutrients needed to supplement photosynthesis. Unlike normal roses, Venus weeds blossom early in spring, with the flower persisting until late summer. This is to maximize its hunting time before the “woman” structure desiccates and ruptures, releasing pollen. Though the Venus weed is very rare, it is capable of self-fertilization. They are territorial creatures, without much use for other intelligent beings. They occasionally enter into alliances with other evil creatures, however, if a steady stream of fresh blood can be guaranteed.

Blood Sucker. While the Venus weed has creatures grappled with its tendrils, it can use its bonus action to drain their blood. Each creature grappled by the Venus weed takes 7 (2d6) necrotic damage. The target’s hit point maximum is reduced by an amount equal to the necrotic damage taken. The reduction lasts until the target finishes a long rest. The target dies if this effect reduces its hit point maximum to 0.

Tendrils. Melee Weapon Attack: +4 to hit, reach 15 ft., one target. Hit: 5 (1d6 + 2) piercing damage. The target is grappled (escape DC 12) if it is a Large or smaller creature and the venus weed doesn’t have four other creatures grappled.

Ravenloft monsters are so much fun to create. They tend to be a little more “a-hole-ish” than regular D&D monsters, so they make great challenges for DMs like me who love to torment their players. I’ll probably create a few more as I go.

If you aren’t already, be sure to follow me on Facebook where I detail my Saturday campaign sessions.