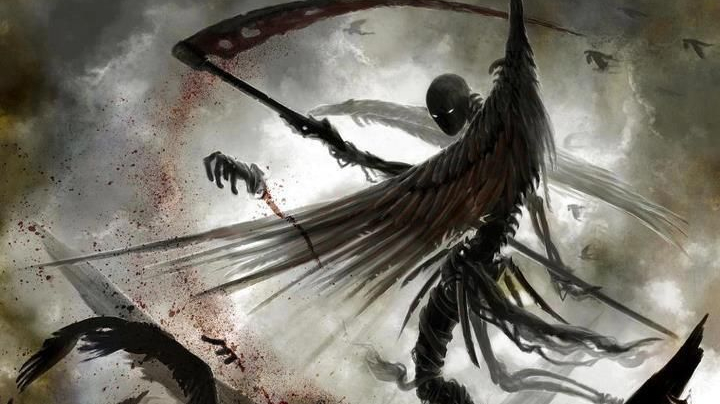 Grave is a tricky one to come up with since it doesn’t lend itself easily to the way the game already functions. Arguably, it’s a weird one from a Fifth Editon perspective, too. Don’t get me wrong. The mechanics are cool. And the concept is cool. But as redditors are prone to say, “What purpose does this serve in the game?”

However, I promised myself that I would maintain all of the “official” domains of the Fifth Edition universe and here I am doing so.

The way I worked this particular domain was making it the ultimate thwarter. Basically, about as obnoxious as a god can be in the game! Its powers are based around stopping other gods from using their powers (particularly life and death gods). In addition, it gains way more followers from its divine location than the other gods do, giving it a distinct advantage at higher levels.

At 1st rank, a god gains the Godly Domain feature. The following Grave domain option is available to a god in the Gods of Wandrossa game.

Gods of the grave watch over the line between life and death. To these deities, death and the afterlife are a foundational part of the multiverse. To desecrate the peace of the dead is an abomination.

The Grave domain lets you choose from an expanded list of powers when you learn a divine power. The following powers are added to the divine power list for you.

Gate to the Afterlife

Starting at 1st level, any time a settlement loses 100 or more of its population, you can use your reaction to gain 100 followers. You can use this feature a number of times equal to your might bonus. You regain all expended uses at the end of a cycle.

At 1st level, any time a god whose might is equal to or less than your own uses a power or feature to reduce a settlement’s population, you can use your reaction to prevent the attempt; the power or feature fails and has no effect. Once you use this feature, you can’t use it again until a new cycle begins.

Starting at 3rd level, your cemeteries drive more mortals to put their faith in you. You gain an additional 20 followers at the end of each year for each settlement that contains both one of your temples and a cemetery.

At 6th level, you can use the Protect action each day as a bonus action.

If you are destroyed or demoted to 9th level or lower, your grand temple turns to ruins.

At 14th level, your authority over the living and the dead is absolute. Place a planar gate in the region where your grand temple is located. The planar gate must be placed on any hex not already occupied by a location. While the planar gate remains open in that region, the region gains the following benefits:

If you are destroyed or demoted to 13th level or lower, the Planar Gate closes.

Implementation Time: 1 reaction, whenever a god uses a power

If a god uses its action to use a power of 4th level or lower, the power fails and has no effect.

At Higher Levels. When you use this power using a power slot of 5th level or higher, the interrupted power has no effect if its level is less than or equal to the level of the power slot you used.

At Higher Levels. When you use this power using a power slot of 3rd level or higher, the wealth cost is reduced by 1 for each slot used above 4th (to a minimum of 1).

You create a new celestial or fiend  (your choice) of CR 4 or lower. In addition, choose one settlement. That settlement’s DV increases by 3 for the duration.

For the duration, any time another god attempts to convert your followers, the number of followers converted is reduced by half.

Select a chosen one whose god’s might is equal to or less than your own. For the duration, the chosen one cannot be moved, nor does it affect any location it is on.

You bless a location with your divine might. Choose one location. The DV of that location increases by an amount equal to your might bonus for the duration.

Choose a divine location whose god’s might is equal to or less than your own. For the duration, that location’s DV is reduced by 3 (to a minimum of 1). In addition, if a conflict is started there, the divine location’s god cannot oppose or assist in the conflict.

Choose a region. Every settlement in the region increases its DV by 4 until the start of the next day.

At Higher Levels. When you use this power using a power slot of 5th-level or higher, the settlements’ DVs increase by an additional 1 point for each power slot used beyond 4th.

You curse a settlement of your choice with a deadly plague. For the duration, the settlement loses 100 of its population each day during the resolution phase.

At Higher Levels. When you use this power using a power slot of 3rd level or higher, the power’s duration increases by 1 additional day for each power slot used beyond 2nd.

You end the plague effect for one settlement.

Choose a god. During the resolution phase, that god’s actions for the day (if any) are considered to have been declared 1 hour later than they actually were. If this would make a god’s declaration occur after the declaration cut off time, its action has no effect and is lost.