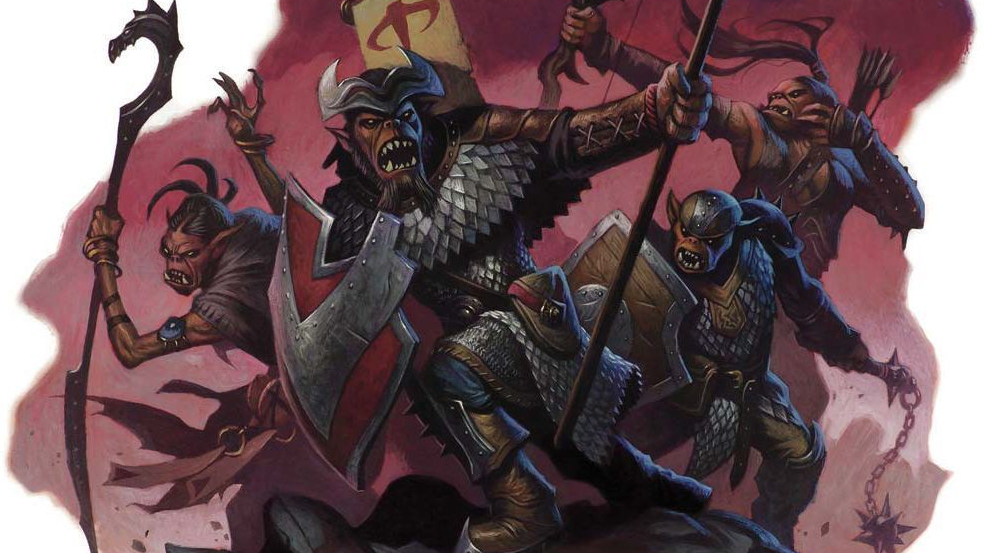 This is a continuation of my scalable NPC/monster series where instead of just creating all new monsters for Fifth Edition, I create rules to make it easy for anyone (including myself) to scale them up or down.

Hobgoblins definitely have to be one of my favorite monsters in D&D 5e. Although they’re an offshoot of another one of my favorite monsters–goblins–they have a cool dynamic in Fifth Edition. They’re militaristic and organized and the way that Fifth Edition’s artists created them have kind of a pseudo-Asiatic vibe to them. Like tall, samurai goblins.

Volo’s Guide to Monsters does an awesome job of explaining how they function in Fifth Edition. They’re basically the “bosses” of the other goblinoids and typically run the show.

What I hope to do with this scalable hobgoblin set is to expand upon the martial hobgoblins found in the Monster Manual. There are three levels detailed there: hobgoblins (CR 1/2), captains (CR 3), and warlords (CR 6). This gives me a rough idea of how hobgoblins should scale.

Interestingly, their “big boss” hobgoblin seems to top out at CR 6. Meanwhile, other humanoid warlords are CR 12 bad guys. I see one of two explanations for this. First, this could mean that hobgoblins overall are weaker than other humanoids. However, that seems unlikely as they have martial advantage which every other species in the game lacks. That leads me to my second conclusion: hobgoblins are a lot scrappier and can do way more with less. In other words, one hobgoblin is tough, two hobgoblins are deadly, and three or more hobgoblins are downright killer.

For further details on how hobgoblins work together, be sure to read Keith Amman’s take on goblinoids from the TheMonstersKnow.com

Synergy is the name of the game with this design. And we can see more of that in the hobgoblin devastators from Volo’s who also have their own form of martial advantage (called arcane) and army arcana which allows them to “carve out” their buddies a la the evoker’s sculpt spells feature. Hobgoblin encounters should rarely be solo.

Another thing I want to do is make the higher-up hobgoblins tied closer to their god, Maglubiyet and Maglubiyet’s co-war deity Nomog-Gaeya. Once a hobgoblin “ascends” and becomes a petitioner for their god, they can continue “the good fight” on Acheron. You’ll see that in its type changing to fiend and it gaining fiendish advantages on par with a demon or yugoloth.

How to Scalable Monsters work?

If you haven’t already seen my last article on scalable NPCs, be sure to check it out.

The long and short of it is that instead of creating a brand new monster for each and every challenge rating you have, instead, you just adjust the monster based on your target CR. It’s kind of like having “levels” but for monsters. So if you need a CR 9 hobgoblin, just reference the Hobgoblin chart below, see what adjustments you need to make and features you need to add and presto: a brand new hobgoblin.

The hobgoblin’s starting statistics are identified on page 186 of the Monster Manual.

As the hobgoblin’s CR increases, it gains the following special traits.

Starting at CR 1/2, once per turn, the hobgoblin can deal an extra 7 (2d6) damage to a creature it hits with a weapon attack if that creature is within 5 feet of an ally of the hobgoblin that isn’t incapacitated. The amount of damage that the hobgoblin deals with this trait increases as it gains CRs as shown on the Hobgoblin Scalable Monster table.

At CR 4, the hobgoblin’s proficiency bonus is doubled for its attack rolls.

Starting at CR 5, the hobgoblin has proficiency in Intelligence, Wisdom, and Charisma saving throws.

Also at CR 6, the hobgoblin can use its reaction to add its proficiency bonus to its AC against one melee attack that would hit it. To do so, the hobgoblin must see the attacker and be wielding a melee weapon.

Starting at CR 10, the hobgoblin has proficiency with Dexterity saving throws and it gains proficiency in the Strength (Athletics) skill.

At CR 11, the hobgoblin’s connection to Maglubiyet allows it to innately cast spells as noted below. Charisma is its spellcasting ability for these spells.

Beginning at CR 12, the hobgoblin’s type changes to fiend (goblinoid) and it gains resistance to bludgeoning, piercing, and slashing damage from nonmagical weapons. Also, it learns to speak Abyssal and Infernal.

At CR 13, the hobgoblin’s weapon attacks are magical.

At CR 15, the hobgoblin gains resistance to cold, fire, and lightning damage.

Starting at CR 18, the hobgoblin has advantage on saving throws against spells and other magical effects.

At CR 19, when the hobgoblin fails a saving throw it can choose to succeed instead. The hobgoblin can use this feature three times; it regains all expended uses at the end of a long rest.

The hobgoblins depicted here use the arms and armors standard for their title: basic hobgoblins use longswords and longbows and wear chainmail while wielding a shield. Meanwhile, captains wear half-plate and carry a greatsword. And warlords and beyond, the Hobgoblin Scalable Monster table assumes all hobgoblins are equipped like warlords with plate armor, shields, longswords, and javelins. Feel free to equip your hobgoblin however you like.

Get the PDF on Patreon

This scalable monster will be available on Patreon for members of all tiers. It’s only $3 to join and you get a 56-page book on sign-up plus access to dozens of other PDFs!