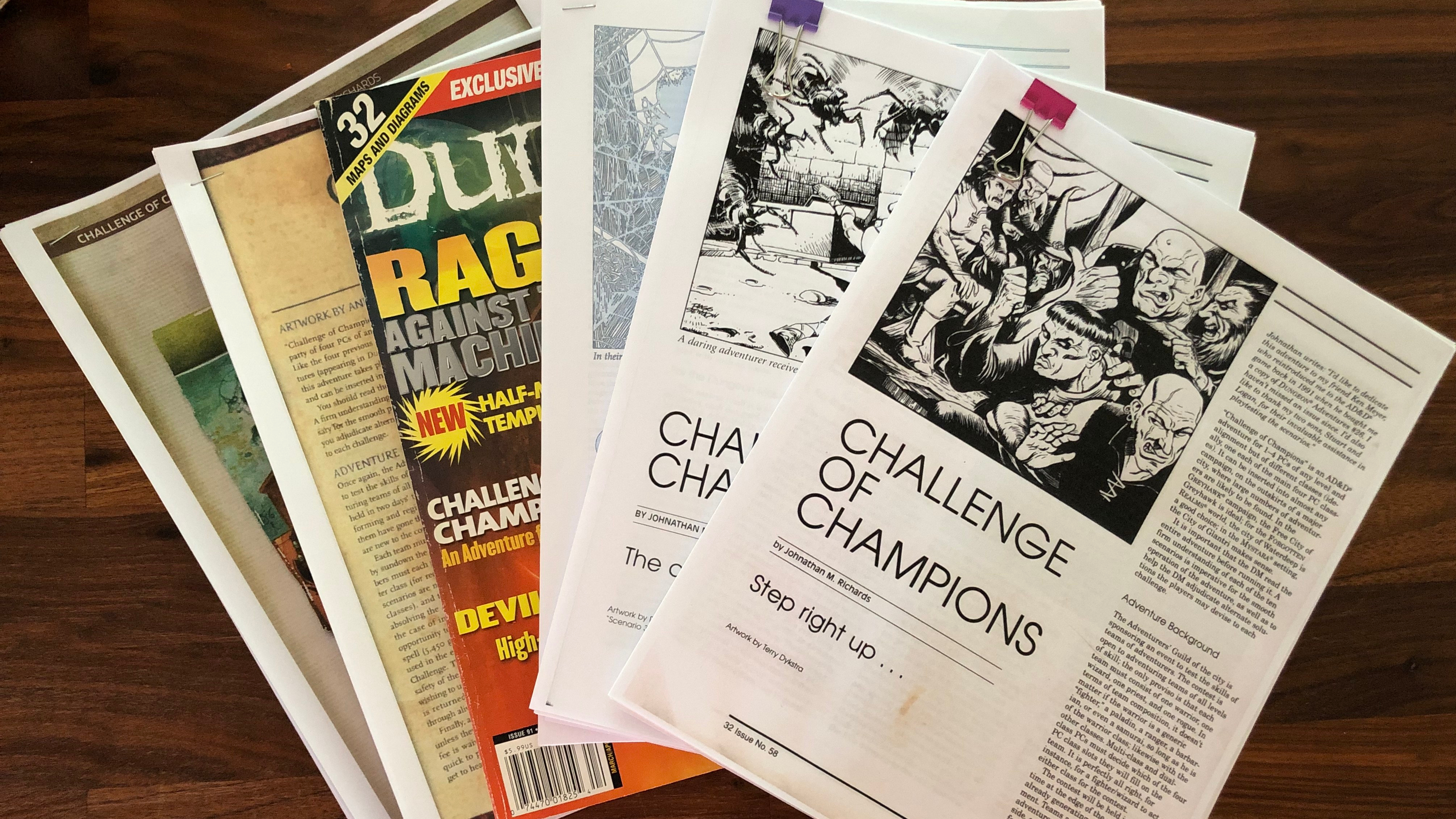 BroadSword Magazine #1 is officially on the way, the entire run of the magazine has secured over $40,000 on Kickstarter. One of the adventures in the first issue involves an old-school, level-independent adventure that requires the characters to think… instead of, you know, just stabbing everything in sight.

However, level-independent puzzles and challenges aren’t something that are easy to create. And I’ve only done it a few times myself. That’s why I thought I might create this article here to learn a little more about thought-provoking challenges through the history of the game and how others tackled it.

And, like everything, I’m going to look back through Dungeon magazine to get those ideas where level-independent game design master Johnathan M. Richards blessed readers with his Challenge of Champions series.

Here is what to expect from this article:

The first Challenge of Champions appeared in the 58th  issue of Dungeon Magazine in March/April 1996.

Here is its description (I left out the setting-specific information):

“Challenge of Champions” is an AD&D adventure for 1-4 PCs of any level and alignment but of different classes (ideally, one each of the main four PC classes). It can be inserted into almost any campaign, on the outskirts of a major city, where large numbers of adventurers are likely to be found.

It is important that the DM read the entire adventure before running it. A firm understanding of each of the ten scenarios is imperative for the smooth operation of the adventure, as well as to help the DM adjudicate alternate solutions the players may devise to each challenge.

A few things of note here:

The sixth and final Challenge of Champions appeared in Dungeon #138 (September 2006). Here is its opening description.

“Challenge of Champions VI” is a D&D adventure for a party of four PCs of any level. Like the previous Challenges (detailed in issues #58, #69, #80, #91, and #108), this adventure takes place on the outskirts of a major city in any campaign world. Make sure you study the scenarios in this adventure carefully, as this should help immensely in adjudicating any alternative solutions your players come up with.

Just like the first, there are 10 scenarios. Classes aren’t as important in this one, and it’s recommended that the party has four PCs.

Each Challenge of Champions more or less had the following structure in place:

Having read through these series, I immediately noticed that there were a few “challenge themes” that appeared in each edition. I’ve made notes on the common themes below and which issues they appear in.

The characters are given cards which they must arrange to solve the puzzle. The three cards in Scenario #1: Cafe Seat (CoCII) offers clues to passing the chessboard. To solve the maze in Scenario #8: Dim (CoCIII), the characters need to assemble the cards. The command word for Scenario #1: One Griffon deactivates the bronze griffon; it’s discovered by arranging the cards. Scenario #9: Nine Strokes (CoCV) requires the players the assemble the pieces to fit the EXIT sign.

Certain solutions require the placement of an object. Sometimes, the object has multiple ways it can be placed, offering different benefits (or penalties) where it is placed. In Scenario #4: Thief’s Challenge (CoCI), the plank placed against the wall offers an advantage on Dexterity checks to cross the slime without falling in. The rope trick spell used at ground level in Scenario #6: Mage’s Challenge (CoCI) makes it harder for characters to get up the cliff. Scenario #3: Runt Girth (CoCII) requires the characters to place the boards in a certain way to make it easier to cross. If a character drinks the potion of growth without holding the partisan in Scenario #9: Imp (CoCIII), the characters won’t be able to get across.

Objects given to the characters may have more than one use. Scenario #6: Eon Pets (CoCII) has the characters use the rowboat both as a rowboat and later as a shield. The staff of fire in Scenario #7: Seven by Five (CoCV) shouldn’t be used as a magic item but as a prop.

Usually, if a monster is involved in a scenario, it is illusory.

Sometimes, a magic item hints that there may be an unseen danger somewhere in the challenge. The characters are given a ring of reptile control at the start of Scenario #7: Hot Spot (CoCI), suggesting they should search for a reptile.

Characters are almost always given some sort of magic items to use in the challenges. The magic items aren’t always intended to be used for the purposes the characters may think they are (see Red Herrings below).

The characters need to use a mirror to turn symbols that appear to be nonsensical into legible words. This was used in Scenario #1 Cobra Guard (CoCI). Scenario #1: Hearth (CoCIII) also uses a mirror to solve a riddle. The totem pole in Scenario #4: Eye for Eye spells (CoCIV) “BREAK MIRROR.” The command word cards in Scenario #8: Eight Boots (CoCV) must be viewed upside down.

Nearly every challenge has a specific order in which the characters should perform tasks. Failure to follow the correct order often results in failure.

A lot of the scenarios require the use of props. All of the mirror trick challenges should have a hand mirror present. Scenario #1: Hearth (CoCIII) requires the use of a pencil. The 2nd Edition Monster Manual is used in Scenario #6: Media (CoCIII).

Magic items or other objects are given to the characters but aren’t intended to be used as their descriptor implies. Scenario #3: River Crossing (CoCI) offers two magic ropes which are used as normal ropes. Scenario #2: Tow Pests (CoCII) offers a mirror as a red herring to fool those who remember the last Challenge of Champions. The command spell in Scenario #5: Former (CoCIII) won’t work on the snake and is useless for the scenario. The four cards given out in Scenario #4: Eye for an Eye (CoCIV) do nothing. Both of the gloves in Scenario #7: Piece of an Eggshell (CoCIV) are useless.

Certain challenges are made more difficult thanks to silencing effects such as the silence spell or gags. Three of the fours characters in Scenario #8: Priest’s Challenge can’t communicate due to gags (CoCI). Only characters that have been discovered in the maze in Scenario #8: Dim (CoCIII) can speak. Thanks to the gibbering mouther in Scenario #3: Are Those Teeth Real (CoCIV) the characters can’t hear each other. Scenario #7: Horseshoes (CoCVI) silences the characters.

This one is probably obvious, but almost all of the challenges in each Challenge of Champions requires the party to work together to solve the problems.

Certain scenarios require that one character act as an escort for the other characters using special items to protect them as he/she goes. In Scenario #9: Bear Sentry (CoCI) one character must place his/her companions into a portable hole and toss it past the bear. Scenario #4: Cyan (CoCIII) sees one character turning cyan to assist characters across the water. Scenario #9: Canine Crossing (CoCIV) has one player enter the pit and climb to the other side.

Using a Weapon for Something Other Than Killing

The character has to use a weapon for something other than stabbing things. This was used to prop open the purple worm’s mouth in Scenario #2: Fighter’s Challenge (CoCI).

The characters are word clues which they must decipher to pass a challenge. Scenario #10: Gem Sprite (CoCI) incorporates a word jumble. Scenario #10: Reuse Rat Bowel (CoCII) also incorporates word jumbles. Scenario #6: Media (CoCIII) uses a word puzzle to help the characters figure out what’s-in-what jar. Scenario #10: Cape (CoCIII) has a word puzzle to solve to find the cape of useful items. The chessboard in Scenario #1: Chess, Anyone? (CoCIV) reveals that the black bag is a “BAD BAG.” Putting the letters in the proper order in Scenario #3: Are Those Teeth Real spell out the word “ALLITERATION.” In Scenario #6: Seasick Sailors, removing the letters from the inscription reveals the command word. Scenario #10: Death Potential (CoCIV) uses the scorecard as the solution. Scenario #3: Three Cloaks (CoCV) uses anagrams. Scenario #4: Four Potions (CoCV) has a word riddle assembled by combining the potion labels.

Part 3. How to Create Your Own Challenges

Now that I’ve broken down all the challenges from the Challenge of Champions‘ series, you should have a decent idea of how to assemble good, level-independent challenges for your characters.

Here are a few steps I’ve ironed out to help in the challenge assembly:

1 – Come up with the solution to the challenge first.

The easiest way to create these challenges is to start from the end and work your way backward offering the best possible solution. You could even start with a map of a room and its obstacles.

Make sure you include a way out of the room or challenge-area. For example, a cylindrical shaped room could have a hole in the ceiling that the characters need to escape through.

Once you have everything in place, work your way backward from the solution.

Try not to overdo certain themes. For example, every challenge involving a word puzzle may get boring after a while. Unless, of course, your players enjoy word puzzles.

A majority of the scenarios in Challenge of Champions come with handouts to help the characters solve the puzzles. In addition, many of the rooms can be difficult to visualize. It helps to create these handouts accurately for the characters to hold, view, and use.

3 – Supply the proper props and clues.

Be sure to sprinkle a few of your challenges with red herrings, but don’t overuse it. Otherwise, the players will always be suspicious that there’s a red herring present.

If you choose to offer hints, make sure that the hint cuts straight to the core of the solution. For example, if the characters are supposed to ignore the cards in a particular challenge, make sure the hint tells them to do that. But don’t give away too much!

Supposedly, Pablo Picasso once said that “good artists borrow, great artists steal.” Don’t be afraid to do the same with your challenges. As you saw in the Common Themes, one of the challenges incorporated the game minesweeper. There are hundreds of apps out there that have puzzle games–why not turn them into challenges? You could get ideas from your Sunday word jumble, or even use some of the challenges presented in Challenge of Champions themselves (retooled, of course, if you’re going to sell the final product).

Hopefully, this guide to level-independent challenges gives you some good ideas for the types of challenges that you can create for your games. When I go to make the challenges for BroadSword Magazine’s Trial of Heroes, I’ll be using these rules myself.

Looking for more content? Become a patron! It’s only $3 per month.

Challenge of Champions’ art and layouts by Wizards of the Coast and Paizo Publishing.