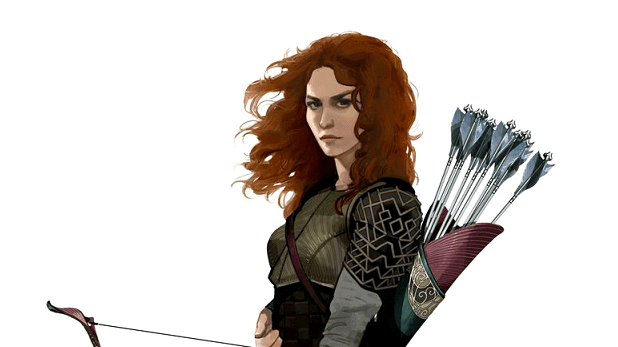 The optional rules in this section pertain to using bows and arrows in your Fifth Edition game.

Sometimes, a character needs to use his or her bow and arrow to do more than just “stab a target that’s over there.” An arrow could be used to set a fire. The archer may wish to aim for a particular spot on a target such as the eye or their hand. Firing an arrow with a rope attached to it makes for a great zip line; a classic staple of great adventures.

The following rules options can be used by archers in your game.

The Fifth Edition ruleset assumes that you will always be targeting a Medium or larger sized creature. However, if you’ve ever fired a ranged weapon of any sort you’ll know that the smaller the target is, the harder it is to hit. Inversely, large targets are a lot easier to hit.

Sometimes, an archer needs to fire an arrow or other projectiles into a small opening such as a narrow window, a keyhole, or between the legs of an ogre. Normally, the opening itself would provide cover if the attacker was targeting a creature or object on the other side of the opening. However, if there is no specific target, the AC depends on the actual size of the opening. Refer to the Opening Armor Class table below to determine the roll needed to get your projectile through the opening.

You can fire a flaming projectile at a target that you can see within range. The arrow (or other projectiles) must have some way of being set ablaze, such as coated in pitch, or wrapped in dry paper. You or another creature must use an action to light the fire. If the flaming arrow hits a flammable object such as a barrel of gunpowder or thatch roof, the object takes the weapon’s normal damage and ignites. If the arrow hits a creature, that creature takes weapon’s normal damage and must make a DC 10 Dexterity saving throw. On a failed saving throw, the creature takes 1d10 fire damage and catches fire. Until someone takes an action to douse the fire, the creature takes 1d10 fire damage at the start of each of its turns.

You can attach a rope to your arrow with the intent of creating a zip line from it. Due to the weight and awkwardness of the attached rope, your ranged weapon attack rolls made with the arrow are made at disadvantage. You can then can fire the arrow at an object you can see within the weapon’s normal range. If the arrow hits, the arrow sticks and the rope is anchored in place. You and other creatures can then climb along the rope.

With this option, if you make a ranged weapon attack roll and score a critical hit, instead of dealing double damage, you may substitute one of the following options:

Sometimes, a well-fired arrow can do more than damage a target. It can help you change a foe’s attitude and demonstrate who is control. When you make a ranged attack roll at a target and hit, you can choose not to deal damage. Instead, the arrow lands within inches of the target, narrowly missing them. You can then immediately make a Charisma (Intimidation) check contested by the target’s Wisdom (Insight). With a successful check, the target’s attitude becomes indifferent towards you if it is hostile or friendly if it is indifferent. If the target is immune to being frightened, it automatically succeeds the contest.

During an archery competition, two or more archers test pit their archery skills against each other. Below are a few of the competitions that an archer may compete in.

In this type of competition, small objects are placed just outside of a weapon’s normal range (for example, bottles are set atop a fence post 100 feet away from an archer wielding a short bow). The archer is allowed to make a number of shots equal to the number of targets present and must roll a 15 or higher to hit each target (or 20 if the targets are moving). Each target the archer hits is worth 5 points.

The third type of archery competition is a little more dangerous. A “volunteer” holds the object for the shooters to target. The target can be an apple placed atop the volunteer’s head, a balloon held in their mouth, or an item that they toss into the air. The archer makes a ranged weapon attack against the object and the object counts as having half cover provided by the creature. If the shooter misses the target but is still within the range that the creature’s half-cover provides, the shooter hits the creature instead and the creature takes damage.

The archer feat options below are presented in alphabetical order.

You are deadly with ranged weapons, especially at close range. You gain the following benefits:

You have perfected using a longbow at long range. You gain the following benefits: