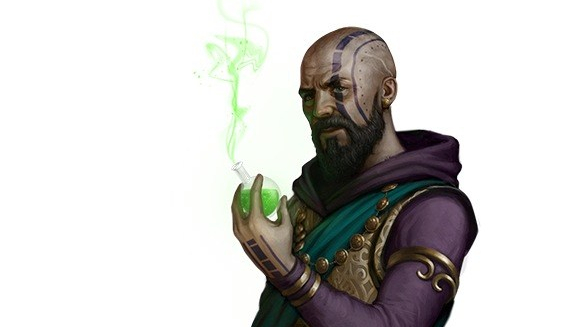 Warning: if you are in my Saturday group (especially if your name is Jordan) do not read this as it contains spoilers.

Xentarich is a man who craves absolute power and wealth, yet has no qualms about the methods he employs to get them. Xentarich is bald and well-tanned, and some of his features appear exotic. He wears a small, well-trimmed beard and dressed in rare and luxurious clothes (worth 300 gp). Xentarich craves luxuries and spent much of his wealthy making the Colossus more habitable. Xentarich does not leave area 29 under any circumstances, as he is too busy keeping the Colossus’s mind in check. Xentarich owns a shield guardian that guards area 20 and blocks the stairs to the control room.

Special Equipment. Xentarich wears an amulet of shield guardian control, a cloak of protection, a ring of force resistance, and a scarab of protection, plus he wields a +1 dagger. Xentarich also carries Heward’s handy haversack, a potion of greater healing, a potion of serious healing, a scroll of dispel magic, a scroll of conjure elemental, and a wand of magic missiles.

Legendary Resistance (3/Day). If Xentarich fails a saving throw, he can choose to succeed instead.

Magic Resistance. Xentarich has advantage on saving throws against spells and magical effects.

Spellcasting. Xentarich is a 14th-level spellcaster. His spellcasting ability is Intelligence (spell save DC 19, +11 to hit with spell attacks). Xentarich has the following wizard spells prepared:

*Xentarich casts these spells on himself before combat.

Move. Xentarich moves up to half his speed.

Xentarich is featured in the ‘Heart of the Iron God’ adventure.