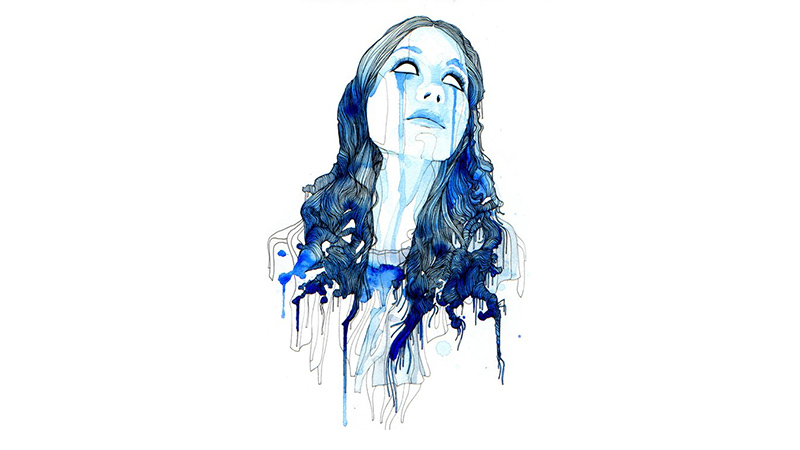 The Mexican folklore, La Llorona (pronounced [la ʝo.ˈɾo.na], “The Weeping Woman”) is a ghost of a woman who lost her children and now cries while looking for them in the river, often causing misfortune to those who are near, or who hear her.

The Legend of La Llorona

The legend is said that in a rural village there lived a young woman named Maria. Maria came from a poor family but was known around her village for her beauty. One day, an extremely wealthy nobleman traveled through her village. He stopped in his tracks when he saw Maria. Maria was charmed by him and he was charmed by her beauty, so when he proposed to her, she immediately accepted. Maria’s family was thrilled that she was marrying into a wealthy family, but the nobleman’s father was extremely disappointed that his son was marrying into poverty. Maria and her new husband built a house in the village to be away from his disapproving father.

Eventually, Maria gave birth to twins: a boy and a girl. Her husband was always traveling and stopped spending time with his family. When he came home, he only paid attention to the children and Maria knew her husband was falling out of love with her. One day, he left and never returned.

Years later, as Maria and her twins were walking by a river, she saw a familiar carriage with a younger, beautiful woman next to her husband. Maria was so angry and confused that, without thinking, she picked up her two children and threw them into the river, drowning them. Only after she saw their bodies floating in the river did she realize what she had done and she then jumped into the river, hoping to die with her children. Now she spends eternity looking for her children around that river. It is said that if you hear her crying, you are to run the opposite way. If you hear her cries, they could bring misfortune or even death. Many parents in Mexico and Guatemala use this story to scare their children from staying out too late.

In some versions of the tale, La Llorona kidnaps wandering children who resemble her missing children, asks them for forgiveness, then kills them to take the place of her own. People who claim to have seen her say she appears at night or in the late evening by rivers or lakes. Some believe those who hear the wails of La Llorona are marked for death but those who escape in time are not, as in the Gaelic banshee legend. Amongst her wails, she is noted as crying “¡Ay mis hijos!” which translates to “Oh my children!” In the Guatemalan version of the legend, it is said that when her wails sounds near she is actually far and when she sounds distant- she is actually very near.

Ethereal Sight. The llorona can see 60 feet into the Ethereal Plane when it is on the Material Plane, and vice versa.

Incorporeal Movement. The llorona can move through other creatures and objects as if they were difficult terrain. It takes 5 (1d10) force damage if it ends its turn inside an object.

Hopeless Wail (1/Day). The llorona emits a magical cry. Every humanoid and giant within 60 feet of the llorona that can hear the wail must succeed on a DC 15 Constitution saving throw or be cursed with llorona’s sadness. The cursed target can’t regain hit points, and its hit point maximum decreases by 10 (3d6) for every 24 hours that elapse. If the curse reduces the target’s hit point maximum to 0, the target dies, and its body turns to dust. The curse lasts until removed by the remove curse spell or other magic.

Horrifying Visage. Each non-undead creature within 60 feet of llorona that can see it must succeed on a DC 15 Wisdom saving throw or be frightened for 1 minute. If the save fails by 5 or more, the target ages 1d4 x 10 years. A frightened target can repeat the saving throw at the end of each of its turns, ending the frightened condition on itself on a success. If a target’s saving throw is successful or the effect ends for it, the target is immune to this llorona’s Horrifying Visage for the next 24 hours. The aging effect can be reversed with a greater restoration spell, but only within 24 hours of it occurring.