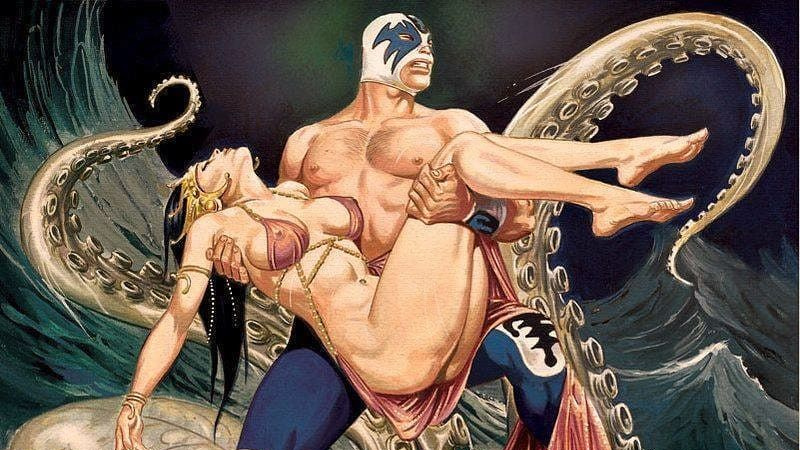 Lucha libre (Spanish pronunciation: [ˈlut͡ʃa ˈliβɾe], meaning “freestyle wrestling” or literally translated as “free fight”) is the term used in Latin America for professional wrestling. Since its introduction to Mexico in the early 20th century, it has developed into a unique form of the genre, characterized by colorful masks, rapid sequences of holds and maneuvers, as well as “high-flying” maneuvers. The wearing of masks has developed special significance, and matches are sometimes contested in which the loser must permanently remove his mask, which is a wager with a high degree of weight attached. Tag team wrestling is especially prevalent in lucha libre, particularly matches with three-member teams, called trios.

Lucha libre wrestlers are known as luchadores (singular luchador, meaning “wrestler”). They usually come from extended wrestling families who form their own stables.

In Dungeons & Dragons Fifth Edition, luchadores are specialized fighters that incorporate fisticuffs, grappling techniques, and magic to battle monsters and support groups of like-minded adventurers. Nearly all luchadores are masked. Their masks often represent a lineage of fighters who took up similar mantles. A luchador protects and represents a town, village, or region, usually the one where he or she was born; this is where the luchador draws its power.

Grappler. The luchador has advantage on attack rolls against any creature grappled by it.

Unarmored Defense. While the luchador is wearing no armor and wielding no shield, its AC includes its Constitution modifier.

Bodyslam (Recharge 5-6). Melee Weapon Attack: +5 to hit, reach 5 ft., a creature that is grappled by the luchador, incapacitated, or restrained. Hit:  38 (7d10) bludgeoning damage and the target falls prone.

No Sell. As a reaction, the luchador can subtract 1d10 + 10 damage from a nonmagical attack that hits it.