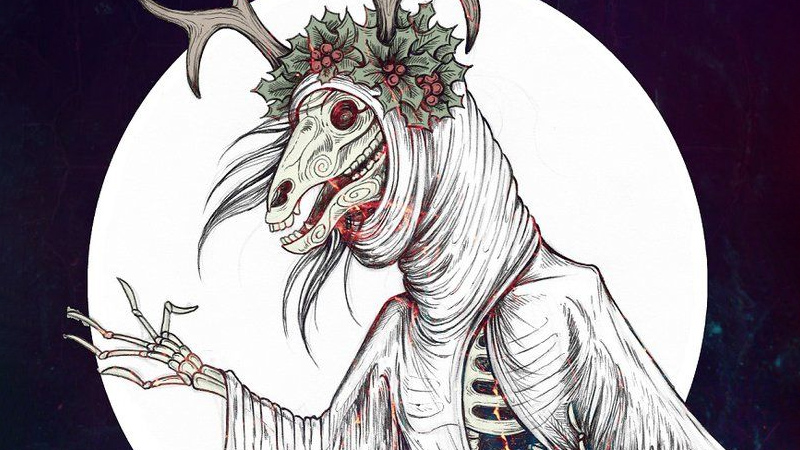 The Mari Lwyd (/mæriˈlɔɪd/) is a wassailing folk custom found in South Wales. The tradition entails the use of an eponymous hobby horse which is made from a horse’s skull mounted on a pole and carried by an individual hidden under a sackcloth. It represents a regional variation of a “hooded animal” tradition that appears in various forms throughout Great Britain.

The custom was first recorded in 1800, with subsequent accounts of it being produced into the early twentieth century. According to these, the Mari Lwyd was a tradition performed at Christmas time by groups of men. They would form into teams to accompany the horse on its travels around the local area, and although the makeup of such groups varied, they typically included an individual to carry the horse, a leader, and individuals dressed as stock characters such as Punch and Judy. The team would carry the Mari Lwyd to local houses, where they would request entry through the medium of song. The householders would be expected to deny them entry, again through song, and the two sides would continue their responses to one another in this manner. If the householders eventually relented, then the team would be permitted entry and given food and drink.

Although the custom was given various names, it was best known as the Mari Lwyd; the etymology of this term remains the subject of academic debate. The folklorist Iorwerth C. Peate believed that the term meant “Holy Mary” and thus was a reference to Mary, mother of Jesus, while fellow folklorist E. C. Cawte thought it more likely that the term had originally meant “Grey Mare”, thus referring to the heads’ equine appearance. A number of earlier folklorists to examine the topic, such as Peate and Ellen Ettlinger, believed that the tradition had once been a pre-Christian religious rite, although scholarly support for this interpretation has declined amid a lack of supporting evidence.

Although the tradition declined in the early to mid-twentieth century, in part due to opposition from some local Christian clergy and changing social conditions, it was revived in new forms in the mid-to-latter part of the century. The tradition has also inspired various artistic depictions, appearing, for instance, in the work of the painter Clive Hicks-Jenkins and the poet Vernon Watkins.

— A common opening to the pwngco

Not all things that look dead are evil. Or even dead. This is the story of the Mari Lwyd, a spirit, a fey, that dances its way through towns, seeking temporary shelter while singing its songs. Not evil. Nor dead.

Mari Lwyds are rarely alone, often accompanied by other fey; a ragtag band of sprites, satyrs, magical goats, and other oddities, typically from the Seelie Court. Although, there are tales that the Mari Lwyd’s band can consist of any member of any court (or otherwise) so long as they are in the mood for good company, good food, and of course, good drink.

Sadly, as the world turns its attention to industry and the old magicks fade further and further from memory, the Mary Lwyds appear less and less. Blind, old storytellers claim it’s because the doors to their world grow more and more narrow and they have no way to get to us anymore. While others believe that the taint of industry and the grip of the Shadowfell build natural wards, preventing joy from escaping into the Prime Material.

Either way, should a knock come at your door near the Midwinter Festival, be a friend, and open it. It may be the Mari Lwyd asking for leave.

Fey Nature. A mari lwyd does not require sleep.

Magic Resistance. The mari lwyd has advantage on saving throws against spells and other magical effects.

Song of Joy. The mari lwyd sings a joyful song. Each creature within 60 feet of the mari lwyd that can hear it must make a DC 14 Charisma saving throw or become magically charmed by the mari lwyd for 24 hours. Whenever the mari lwyd deals damage to the charmed creature, it can repeat the saving throw ending the effect on itself on a success.

Self-Banishment. When an attack hits the mari lwyd that would deal damage to it, as a reaction, the mari lwyd can instantly disappear and return to its home plane, the Feywild, before damage is rolled. If the meri lwyd is in the Feywild, it can’t use this effect.

What? A non-aggressive creature from DM Dave? Say it ain’t so!

I guess you could say I’m in the holiday spirit. The idea of a horsehead with a sheet attached to it knocking on doors asking for food and drink is just too cool. And sometimes, roleplaying ain’t all about the kill-kill-loot-kill-kill.

Next up on the blog… monsters that are all about the kill-kill-loot-kill-kill.

Art by TheFlyingViper on DeviantArt.