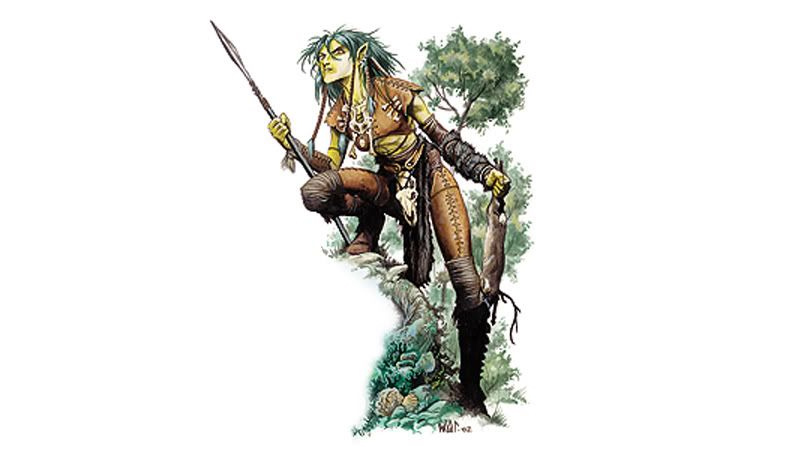 Forest giants are among the tallest specimens of giantkind, and they can live to be up to 200 years old. They are powerful hunters that pose a threat to all animals that dwell in the woods.

An adult forest giant stands 18 feet tall but weighs only 3,000 pounds. The lanky, muscular body resembles that of a wood elf but appears much sturdier. The creature has deep earth-yellow skin and pale green hair that is usually wild and unkempt. The typical clothing for either gender is made of fur or leather, and each forest giant also wears some bone jewelry, particularly necklaces and earrings.

A forest giant’s bag contains everything needed to survive in the wilderness, including tools to make and repair weapons, rocks, a few mundane items, and the giant’s personal wealth. These items tend to be parts of things it killed for food such as scraps of fur and hide, dried insects, and bones.

Forest giants live solely in wooded areas regardless of the climate. These ravenous meat-eaters hunt nearly any kind of animal or beast for its flesh. Forest giants maintain friendly relations with fey, and they cooperate with other primitive woodland beings who enjoy the same hunting lifestyle as they do.

Forest Camouflage. The giant has advantage on Dexterity (Stealth) checks made to hide in forest terrain.

Furtive. The giant can take the Hide action as a bonus action on each of its turns.

Multiattack. The giant makes two attacks with its spear.

Sometimes, when I’m low on inspiration, I turn to the old edition for cool monster ideas. I like the idea of the old forest giants, however, there wasn’t a whole lot that set them apart from stone giants. So I threw in the Nimble-Escape-esque feature and gave them a spear instead of the old club/rock combo.

What’s odd was their crazy high Charisma in 3rd edition. And there was never an explanation given as to why their Charisma scores would be that high. They don’t seem to have any natural sorcerous or warlock powers, and their skills all slant towards Dexterity and Wisdom. Maybe that’s something worth exploring later?

Art by Wayne Reynolds (Wizards of the Coast)