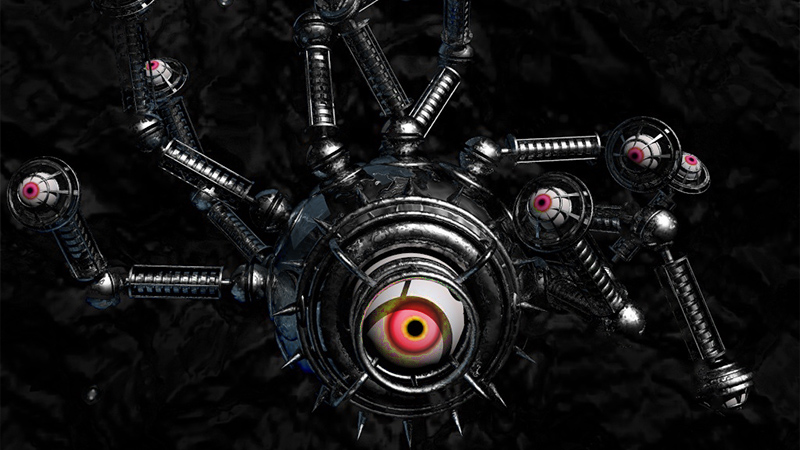 If you’re a player in or a fan of my Saturday (Bloody Bunch) campaign, you might want to avoid reading this. It contains spoilers.

Stzubnuk’moech’k (you can call him “Chuck”) was a powerful beholder in life. Ruler of the Demi-plane of Nightmares, Chuck oversaw the Grove of Dreamers. In addition, he (begrudgingly) ushered new beholders into the world, carefully plucking away unwanted kin and malformed aberrants birthed among the “pure” eye tyrants.

Unfortunately, Chuck’s ambition got the best of him and he eventually drew the attention of a surly planetar named Qox. The two battled in a massive underground cavern, a titanic bout that literally shook the Underdark. Chuck was able to mortally wound the celestial with his disintegration rays, but not before the angel smote Chuck, sending the beholder crashing into a mud pit. As he lay dying, the thick mud engulfing him, Chuck implanted his mind and soul into a ring of mind-shielding. Then, Chuck’s body died.

Nearly one hundred years later, a group of adventurers discovered the skeletal remains of Chuck and all his rings. The group’s wizard, a snooty elf from Silverymoon, claimed Chuck’s ring of mind-shielding immediately.

What the wizard didn’t know (nor Chuck) was that the ring was damaged in the fight. Chuck’s mind clung to a far corner of the ring’s pocket dimension, leaving just enough space for another soul to enter if ever the time should come.

And, naturally, the time came. During a combat with an out-of-control living spell, the elven wizard was temporarily dead. Thus, his mind moved into the ring. The group’s cleric revived the wizard, and the ring returned his consciousness. But the wizard wasn’t alone. He now had a new flatmate sharing his mind: a beholder named Stzubnuk’moech’k.

Realizing that the only way to get out of the mind of the elf was to work with it, Chuck made a promise to the elf that if he got him to a gnome named Zoot, not only would Chuck exit the elf’s mind, but he would also help the elf build a much-needed shield guardian companion. Cautiously agreeing, the elf now works with Chuck towards the common goal of survival.

Zoot is a gnome artificer that specializes in shield guardians and iron golems. Years ago, he presented the plans for a device he called “the iron orb” to a number of well-known beholders in the Realms. The iron orb was, essentially, a mechanical contraption that aging beholders could wear like a suit of armor and control with their telekinesis. The machine would also amplify the beholders’ powers, giving them greater control of their rays in addition to the added benefits of the device’s mithril armor shell.

Too egotistical and, frankly, too cheap to see the value in Zoot’s creation, most of the beholders ignored the concept. However, Chuck thought Zoot was on to something. And now, without a body to call his own, Chuck’s interest in the iron orb design has only increased.

But it’s been over one hundred years since Chuck last saw Zoot. Hopefully, the gnome is still alive.

Fire Absorption. Whenever the orb is subjected to fire damage, it takes no damage and instead regains a number of hit points equal to the fire damage dealt.

Immutable Form. The orb is immune to any spell or effect that would alter its form.

Magic Resistance. The orb has advantage on saving throws against spells and other magical effects.

Smoke Cloud (1/day). As a bonus action, the orb can create a 30-foot-radius sphere of smoke centered on itself. The sphere spreads around corners and its area is heavily obscured. The cloud lasts for 1 minute or until a wind of moderate or greater speed (at least 10 miles per hour) disperses it. A creature that starts its turn in the cloud or enters it for the first time must succeed on a DC 17 Constitution saving throw or become poisoned until the end of its next turn. A creature that succeeds on its saving throw is immune to the smoke cloud for 24 hours. Undead and constructs automatically pass their saving throws.

Stun Ray. The orb targets one creature it can see within 30 feet of it. The target must succeed on a DC 17 Dexterity saving throw or take 21 (6d6) lightning damage and is stunned until the end of its next turn.

Disintegration Canon (Recharge 6). The orb fires a line of force energy in a 120-foot line that is 10-feet wide. Each creature in the area must succeed on a DC 17 Dexterity saving throw or take 45 (10d8) force damage. If this damage reduces the creature to 0 hit points, its body becomes a pile of fine gray dust. If the target is a Large or smaller nonmagical object or creation of magical force, it is disintegrated without a saving throw. If the target is a Huge or larger object or creation of magical force, this blast disintegrates a 10-foot cube of it. After the orb fires its canon it cannot use its fire ray or disintegration canon again until the end of its next turn.

Web Cannon (3/day). The orb fires thick, sticky webbing at a point it can see within 90-feet of it. The webs fill a 20-foot cube from that point for 1 hour. These webs function similarly to those created with a web spell (escape DC 17) but do not require the orb to concentrate in order to maintain them.

What will happen to Chuck?

Will Chuck become a BBEG for the Saturday group? Or will he continue to assist them? It’s possible he might not even make it to iron orb status. Either way, enjoy the statistics for the iron orb. Hopefully, it can make a cool monster for your own campaign.

And don’t forget to follow along on Facebook, where I keep regular updates on my Saturday campaign.

Art by calamarain on DeviantArt.