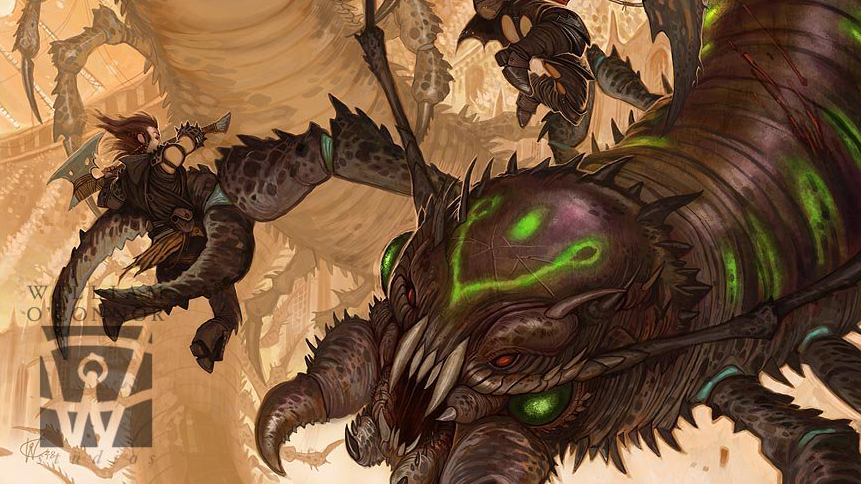 Megapedes are colossal centipedes which roam the sandy deserts of Athas. Megapedes are very similar to normal centipedes in all ways except in size. They have a very long (100 to 150 feet), segmented body which sports a pair of legs nearly every two feet. These legs are five feet in length and have flexible claws at their ends. The body of a megapede is covered with a fur-covered, bulbous skin which serves as a pseudo-exoskeleton.

The megapedes of Athas are, with the exceptions of the Dragon and Nightmare Beasts, the most dangerous feature of traveling across the deserts of this harsh world. Because of their sheer size, megapedes cannot normally hide their presence. Most, however, live beneath the sands of the desert, only surfacing to feed on unfortunate passers-by. Herds of erdlus and even kanks are among the favorite foods of megapedes, though they often survive on vegetation alone for weeks on end.

When a megapede is ready to lay eggs, it will find an isolated area, if possible in the rocky barrens of the Tablelands, and begin to make a cocoon in which to place its eggs. Up to three eggs can be placed within one cocoon, which often reaches near 60 feet in length. A cocoon will remain for four to five weeks before bearing young megapedes. At birth, a megapede is 20 to 30 feet long, growing to its full size within three months after birth.

While not especially protective of its cocoon, a megapede which has laid eggs will fight off any creature which threatens them, mostly out of instinct.

Chameleon Skin. The megapede has advantage on Dexterity (Stealth) checks made to hide. This is a magical effect.

Innate Spellcasting (Psionics). The megapede’s innate spellcasting ability is Wisdom (spell save DC 14, +6 to hit with spell attacks). It can innately cast the following spells requiring no components:

Multiattack. The megapede makes six attacks: five with its claws and one with its bite.

Bite. Melee Weapon Attack: +8 to hit, reach 10 ft., one target. Hit: 19 (3d10 + 3) piercing damage. The target must make a DC 20 Constitution saving throw, taking 21 (6d6) poison damage on a failed saving throw or half as much damage on a successful one. If the poison damage reduces the target to 0 hit points, the target is stable but poisoned for 1 hour, even after regaining hit points, and is paralyzed while poisoned in this way.

Psionics. The megapede uses one of its at-will innate spellcasting abilities.