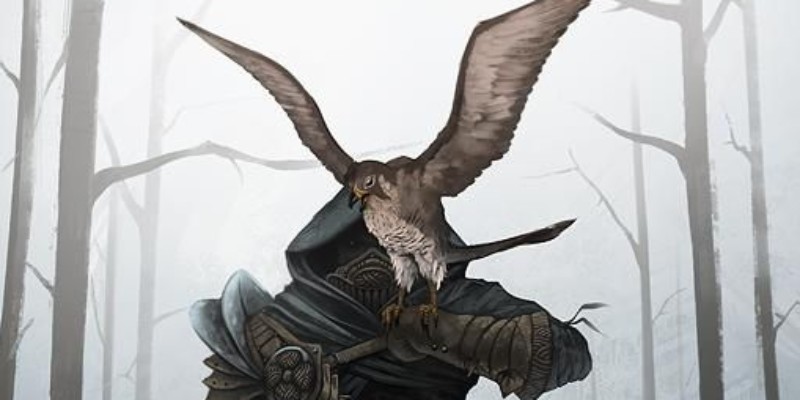 This is one I’ve been looking forward to because it’s just so niche but also such a cool idea. In my opinion (and a whole lot of other folks from what I understand) Rangers are a little underpowered. There have been a few fixes here and there kicking around the internet, but the general feeling is still a little “blah”, especially when it comes to pet companion rangers.

I’ll say this: from a game designer standpoint, the rules for companions make sense. If it could attack without your action or sharing one of your attacks the action economy would be pretty busted, especially for a tier 1 feature. Suddenly, Beast Master rangers would go from being one of the most “eh” features in the game to one of the most OP ones.

Anyways, all that aside, here is what I expect to do with this build:

This one was pretty easy to make, mostly because I knew exactly what I wanted it to do and how I wanted to do it. Plus, a lot of the features, as you’ll quickly be able to tell, are borrowed from a lot of what already exists. Also, the subclass heavily assumes that the falconer will rely on ranged attacks, although it does have quite a few features that work at close range. However, the abilities nullify a character’s need to pick up the Sharpshooter feet, instead allowing them to boost their other abilities.

The 3rd level beast companion block is straight out of the ranger traits, so that was easy. Just had to change some of the language. On notable I change I made was jacking up its hit points to 5x the ranger’s level instead of 1 to account for its low CR.

At 7th, I wanted the falcon to work more as a forward position on the battlefield than an extra attack, effectively giving the ranger bonuses on its attacks and utility. The falcon can spot targets for the ranger, disarm creatures, and even create distractions while up close and personal. Each of these effects are roughly in line with what the falcon would normally be able to do anyways with no change to respective action economy, but a little more specialized.

The 11th level feature gives the falcon a reaction based attack it can use to temporarily stop ranged attackers and spellcasters. It works similar to the Monster Hunter’s 11th level ability except a) it deals damage (not a lot, mind you, since at 11th level the falcon can only deal 5 damage or 10 with a crit) and b) still requires the creature to make a “concentration style” saving throw which is potentially worse than what the ranger’s spellcasting save would be at that level.

Finally, at 15th, the falcon and the ranger can merge souls, turning the ranger into a flying, shooting, dodging machine. Compared to other 15th level abilities, this one shouldn’t be too rough, and may even be a little underpowered compared to some. It gives the ranger an incredible fly speed, certainly, but that fly speed lasts for only 1 minute. Also, the ranger gets all the same ranged bonuses that it would get while using its Eye of the Falcon feature (minus the ability to see behind full cover). And the ranger can use its reaction to barrel roll out of the way when someone tries to hit it with a ranged weapon attack. This is meant to be the ranger’s blitz power, sort of a “hold my beer” power that the ranger whips out when it’s time to whoop that ass.

At 3rd level, a ranger gains the Ranger Archetype feature. The following Falconer option is available to a ranger, in addition to those normally offered.

Taking on the Falconer archetype means taking on a falcon as a beast companion. Your falcon is a helper, using its strengths to overcome your weaknesses and vice versa.

Bond of the Falcon

At 3rd level, you gain a falcon companion that accompanies you on your adventurers and is trained to fight alongside you, using the hawk/falcon stat block in appendix D of the PHB. Add your proficiency bonus to the falcon’s AC, attack rolls, and damage rolls, as well as to any saving throws and skills it is proficient in. Its hit point maximum equals five times your ranger level. Like any creature, it can spend Hit Dice during a short rest to regain hit points.

The falcon obeys your commands as best as it can. It takes its turn on your initiative, though it doesn’t take an action unless you command it to. On your turn, you verbally command the falcon where to move (no action required by you). You can use your action to verbally command it to take the Attack, Dash, Disengage, Dodge, or Help action. Once you have the Extra Attack feature, you can make one weapon attack yourself when you command the beast to take the Attack action.

If you are incapacitated or absent, the falcon acts on its own, focusing on protecting you and itself. The falcon never requires your command to use its reaction, such as when making an opportunity attack.

While traveling through your favored terrain with the beast, you can move stealthily at a normal pace.

If the falcon dies, you can obtain a new falcon by spending 8 hours magically bonding with a falcon that isn’t hostile to you and that meets the requirements.

Eye of the Falcon

As a bonus action, you can magically see through your falcon’s eyes and hear what it hears until the start of your next turn, gaining the benefits of its Keen Sight trait as you do. If you have special senses such as darkvision or truesight, the falcon gains the same special senses for the duration. While you gain access to your falcon’s senses, you and your falcon gain the following benefits:

Talons of the Falcon

By 11th level, you’ve trained your falcon to spot potential dangers on the battlefield and quickly react to them. When you see a creature within 30 feet of your falcon casting a spell or making a ranged attack, you can use your reaction to command your falcon to use its reaction to move up to half its fly speed and attack the creature if it can reach it. If the attack hits, the attack deals damage as normal and the creature must succeed on a Constitution saving throw against a DC of 10 + the damage taken. On a failed save, its spell or attack fails and the action, bonus action, or reaction it used to cast the spell or make the attack is wasted.

Spirit of the Falcon

At 15th level, as an action, you can command your falcon to magically bond with you. To do so, it must be within 5 feet of you. Once it bonds with you, your falcon flies into your chest and temporarily disappears, granting you the following benefits for 1 minute:

At the end the duration, your falcon reappears in an unoccupied space within 5 feet of you. Once you use this feature, you can’t use it again until you finish a long rest.

Art by AtArts on DeviantArt