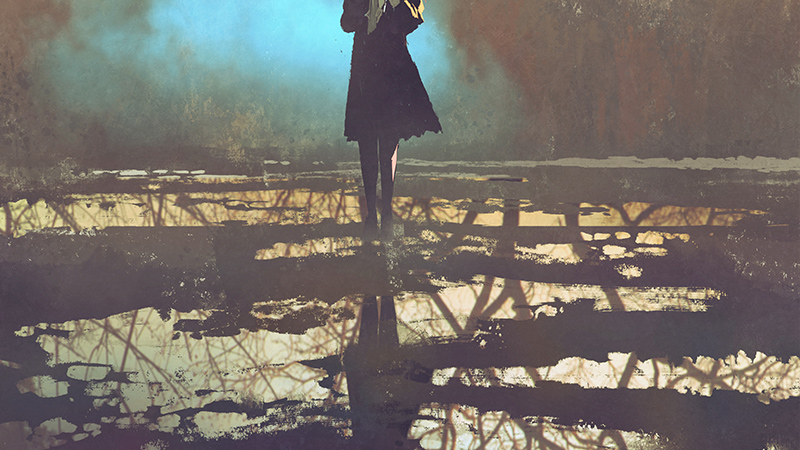 Those that are none-the-wiser to the mud oozes’ modus operandi may learn the hard way that it’s always best to clean mud off your boots as soon as possible. Otherwise, you may look down and notice that your entire foot is gone.

Because a mud ooze is indistinguishable from a rudimentary puddle of thick mud, most mud oozes stay still in well-traveled areas. Once a creature steps through a puddle and hits the ooze, the ooze latches on. Its acids are slower acting than most other oozes, and it uses a numbing agent to keep its dissolution a secret until it has had enough time to feed.

Like mudmen, mud oozes emerge from pools of mud where enchanted rivers and streams deposit.  It is also believed that some mud oozes form from places where mudmen, mud elementals, and mud mephits are destroyed, their lingering magic affecting the mundane mud of those areas.

Mudmen often pair with mud oozes, as they can pick up the ooze and fling them at the mudman’s targets.

False Appearance. While the mud ooze remains motionless, it is indistinguishable from an ordinary mud puddle.

Numbing Agent. Whenever the mud ooze deals damage and its target is unaware of it, the target must make a DC 11 Wisdom saving throw. On a failure, the mud ooze may choose to remain hidden. On a success, the target notices the mud ooze.

Cake. The mud ooze attaches itself to a creature in the same space as it. While attached, the mud ooze doesn’t attack. Instead, at the start of each of the mud ooze’s turns, the target takes 2 (1d4) damage from the mud ooze dissolving whichever of the creature’s body parts it is attached to. If the target takes 25% of its maximum hit points in damage in this manner, the mud ooze fully dissolves the body part that it is attached to and detaches itself (reference page 272 of the Dungeon Master’s Guide for the effects of lingering injuries). The mud ooze can detach itself by spending 5 feet of its movement. It does so automatically if the target dies. A creature, including the target, can use its action to detach the ooze.

If you like the mud ooze’s stat block, then get the word out by sharing it. Click one of the buttons below.

Mud oozes will be included as a Dungeons & Dragons Fifth Edition entry in a new book I’m working on for DMsguild.com titled, simply, CR 1/8.