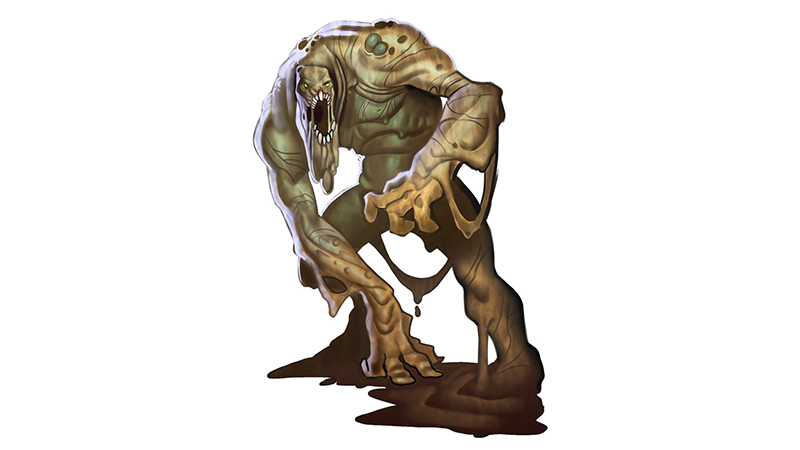 Mudmen are formed in pools of mud where enchanted rivers (even mildly enchanted ones, such as a stream eroding a magical structure) collect and evaporate and concentrate the dweomer. Because they are creatures of magic, mudmen are sometimes called dweomerlings. Mudmen are unintelligent life forces with but one goal – to protect their pools against intruders.

When aroused into a physical form, mudmen take on the appearance of animated mud in a stocky humanoid shape, about 4’ tall. Their coloration varies between a dirty brown and tar black. They have four thick fingers on each hand. Their legs stay submerged within the pool and are not usually visible. Their eyes are pools of jet black shadow.

Mudmen have two states: rest and activity, the latter of which solely involves killing intruders. A mudman’s pool varies in size between 20 and 200 feet in diameter. Such pools are often found near waterfalls.

False Appearance. While the mudman remains motionless, it is indistinguishable from an ordinary mound of mud.

Mud Fling. Ranged Weapon Attack: +4 to hit, reach 5 ft., one creature. Hit: 4 (1d4 + 2) bludgeoning damage. If the target is a creature, it must make a DC 12 Strength saving throw or be restrained for 1 minute. A creature can repeat the saving throw at the end of each of its turns, ending the effect on itself on a success.

The mudman will be included as a Dungeons & Dragons Fifth Edition entry in a new book I’m working on for DMsguild.com titled, simply, CR 1/8.

It will be available for free download and reading until the book is published (probably by the end of this week). Note: not the final artwork.

If you like the mudman’s stat block, then get the word out by sharing it. Click one of the buttons below.