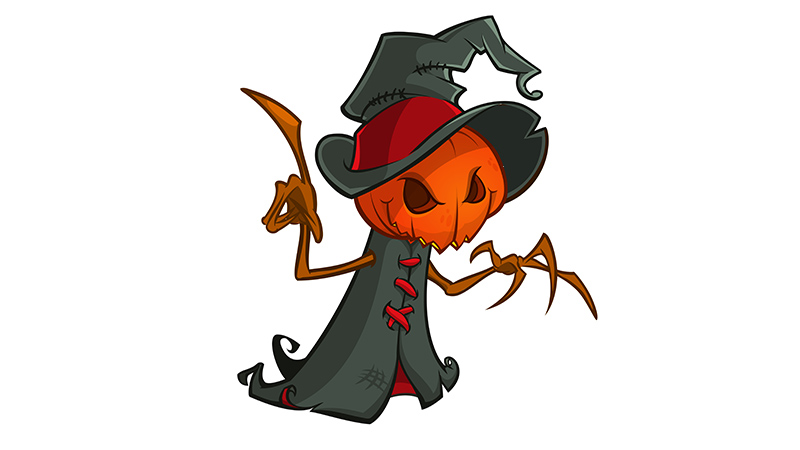 Pumpkin hags are created through a gruesome ritual. First, a hag spits pumpkin seeds into desecrated grounds watered with the blood of its victims. In three days, a pumpkin emerges. Then, the hag carves the pumpkin and places a candle made from the same victim’s skin inside it. Once lit, the pumpkin hag comes to life.

Pumpkin hag heads are massively carved pumpkins and their bodies are made out of tough, woven vines. Usually, a pumpkin hag will dress in a manner similar to its creator using whatever material is available.

While not as powerful as their creators, the pumpkin hags do have limited magical abilities that aid them while they trick and trap a hag’s victims. A pumpkin hag also has a wicked bite that has a chance of lighting its target on fire thanks to the candle in the center of its head.

False Appearance. While the pumpkin hag remains motionless, it is indistinguishable from a normal jack-o-lantern.

Bite. Melee Weapon Attack: +3 to hit, reach 5 ft., one target. Hit: 3 (1d4 + 1) piercing damage. If the target is a creature or a flammable object, it must make a DC 10 Dexterity saving throw. On a failed save, the target ignites. Until a creature takes an action to douse the fire, the target takes 3 (1d6) fire damage at the start of each of its turns.

If you like the pumpkin hag’s stat block, then get the word out by sharing it. Click one of the buttons below.

Pumpkin hags will be included as a Dungeons & Dragons Fifth Edition entry in a new book I’m working on for DMsguild.com titled, simply, CR 1/8.