Oath of the Stonearm | New Subclass for Fifth Edition 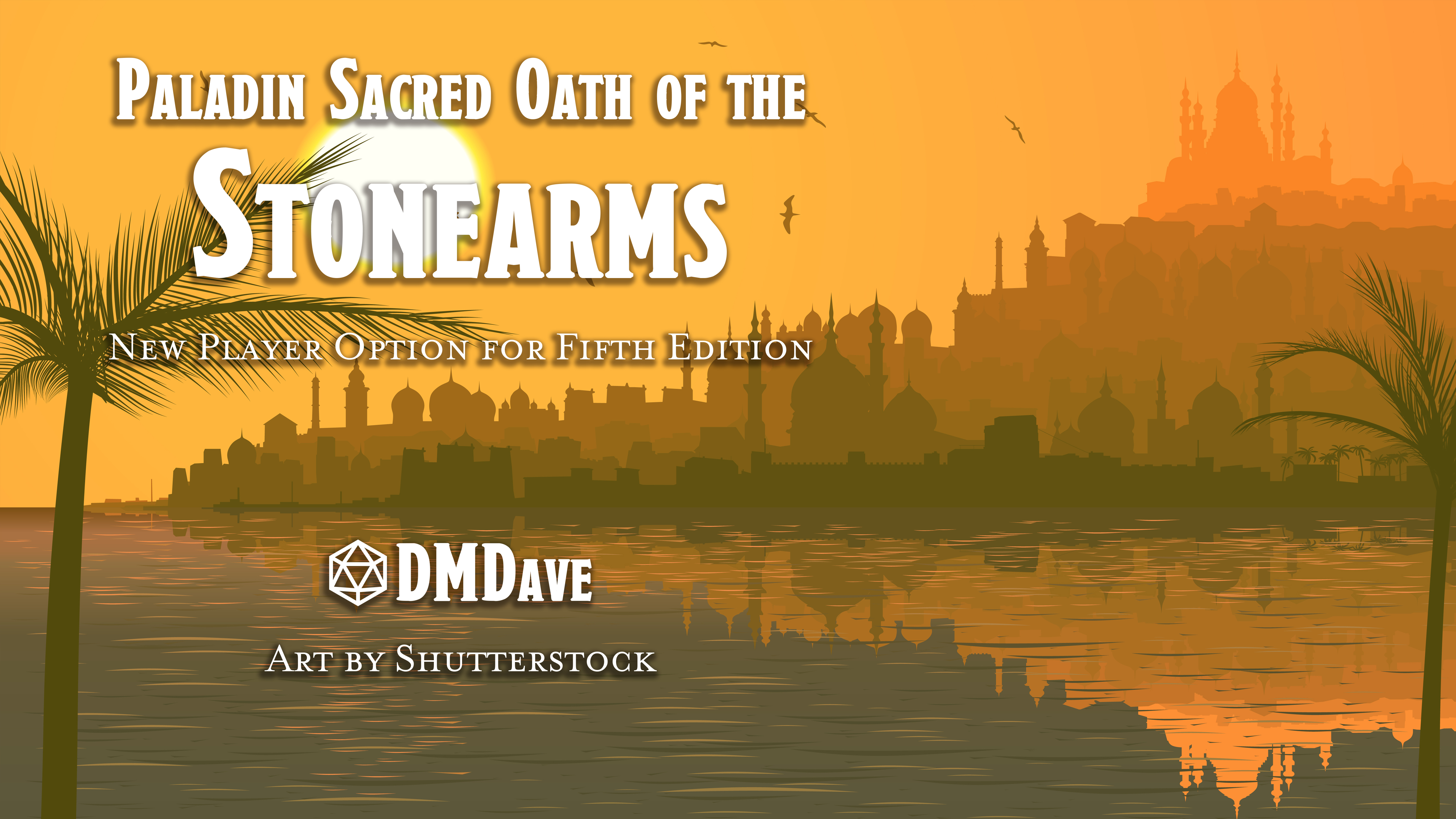 At 3rd level, a paladin gains the Sacred Oath feature. The following Oath of the Stonearm option is available to a paladin, in addition to those normally offered.

Castlesgrasp was founded upon a granite quarry two hundred years ago. Today, the granite stones pulled from the quarry make up much of the city’s walls, buildings, and even the Violet Qsar. But the granite did not come free. Soon after the mine was opened, the earlier Castlegraspians discovered that the terrain was inhabited by earth elementals. The elementals’ queen, a might dao named Gasta the Pure, confronted the Castlegraspians, questioning their presence in Central Omeria. The city’s founder, Khan Hayyan Harrak I, met privately with the dao. In a move thought unusual by many of his peers, Harrak surrendered his soul to the dao in exchange for access to the granite. Initially surprised by Harrak’s offer, Gasta the Pure agreed to the exchange. Not only could the Castlegraspians mine the granite from her kingdom, but she would enchant the stone as well. Thanks to Gasta’s magic, no man-made weapon would ever penetrate Castlegrasp’s mighty granite walls. In addition, Gasta blessed the first nine Castlegraspian soldiers with her touch; she turned the soldiers’ right arms to solid stone. But much to their surprise, they could still move these stone arms as normal. In addition, any bladed weapon they held with their stone arms would petrify any enemy it pierced.

Years later, as the Khan grew ill, he tasked the Nine to bring him before Gasta. As promised, he surrendered himself to the dao. Gasta, cherishing her long, peaceful relationship with the Khan, placed his soul within a sky diamond. She then set the diamond next to her heart, forever keeping him close. Their souls merged and the king and the genie queen became one.

When a Castlegrapsian soldier proves his or herself during training, demonstrating immeasurable virtue, they are encouraged to take the March of the Stonearms. The soldier must enter the first mine and seek the dao Gasta-Harrak. From there, he or she must kneel before the dao and offer his or herself to the dao just as the first Khan did two-hundred years prior. If Gasta-Harrak detects the spirit of the Khan within the soldier, they are granted her blessing—an arm of stone. However, if she senses any impurity within the soldier’s heart, she commands the earth to devour them.

A paladin who takes this oath repeats the tenets of Gasta-Harrak each day at sunrise and again at sunset.

Protect the City. Whether as a member of the city’s fighting forces or an outbound agent, you must always work in the best interests of the city.

Bring Justice to the Lawless. Those who seek to unravel the foundations of civilization must be stopped.

Fight until the Eighth. Nothing short of death will stop you from your mission.

Respect the Land. The earth is your final home. You must respect and honor for it as you would your own parents.

You gain oath spells at the paladin levels listed in the Oath of the Stonearm Spells table. See the Sacred Oath class feature for how oath spells work.

Oath of the Stonearm Spells

When you take this oath at 3rd level, you gain the following two Channel Divinity options.

Blessing of the Earth. As an action, you can grant yourself temporary hit points equal to 5 times your Charisma modifier (minimum of +1).

Stone Blade. As a bonus action, you can imbue one piercing or slashing weapon that you are holding with magic drawn from the earth itself. For 1 minute, the weapon you enchant counts as magical for the purposes of overcoming resistance and immunity to nonmagical attacks and damage. Additionally, a living creature made of flesh that takes damage from your weapon must make a Constitution saving throw against your spell save DC. On a failed saving throw, the creature’s flesh starts to harden. The creature takes one level of exhaustion. If a creature takes a sixth level of exhaustion from this feature, instead of dying, it becomes petrified.

Aura of Stone. Starting at 7th, you exude an aura that weakens your enemies. The aura extends 10 feet from you in all directions, but not through total cover. Each creature of your choice within this aura has disadvantage on its Constitution saving throws.

Stone Defender. Starting at 15th level, you no longer have a need for mundane armor or shields. While you are not wearing armor or carrying a shield, your AC becomes 19. In addition, you can use this feature to cast the stoneskin spell without expending a spell slot. When you do, you must target yourself. After you use this feature to cast the spell, you can’t do so again until you complete a long rest.

At 20th level, you are an avatar for the dao symbiote, which gives you the following benefits:

Get this subclass in PDF form

Patrons of the copper tier and up get unlimited access to over 100 PDFs on my Patreon account. It’s only $3 to join as a copper patron.