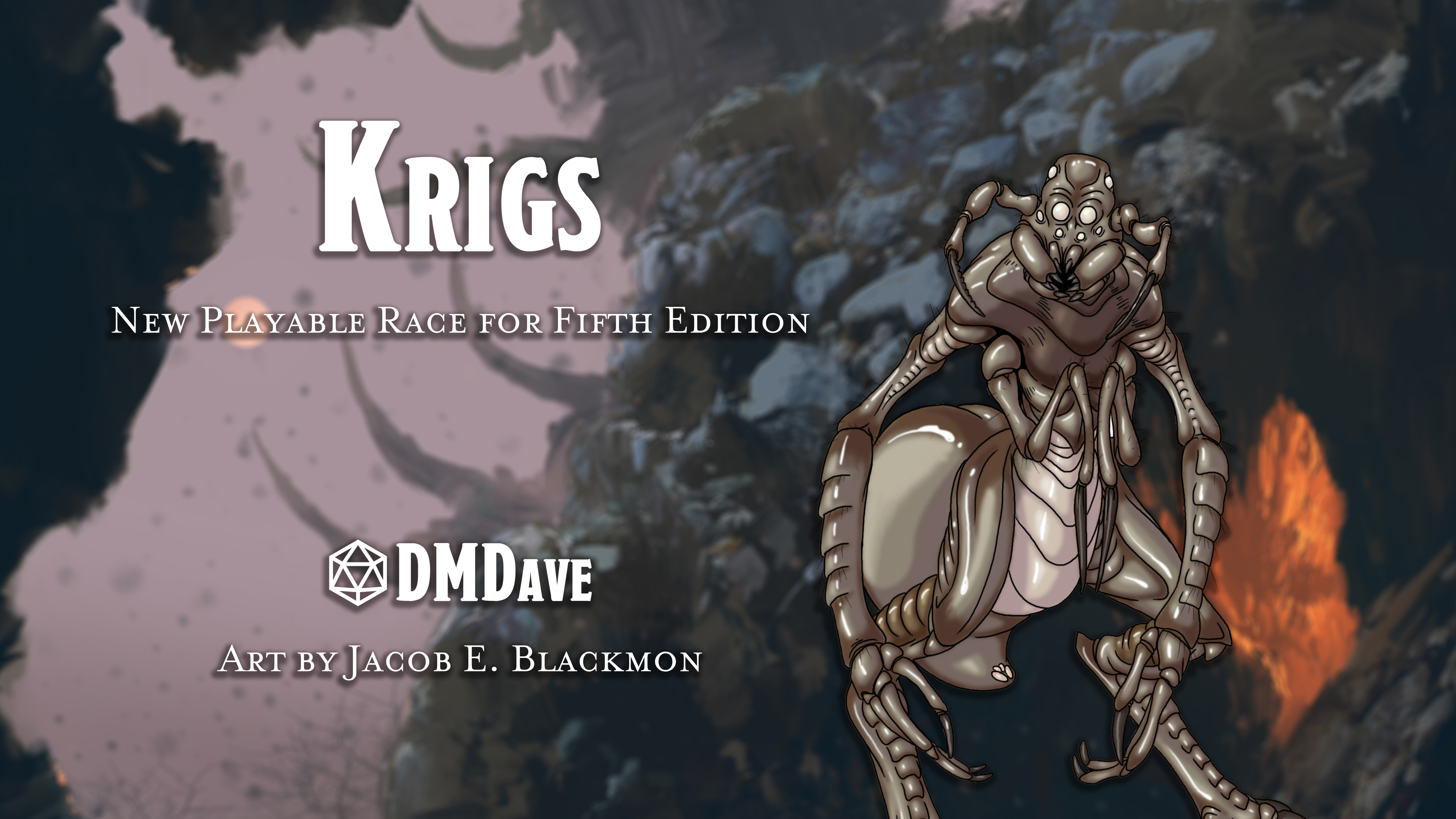 Krigs are spider-humanoids that originate from the Weysevain Maze and, by extension, the town of Orbea in Central Omeria. Intelligent and clever, thanks mostly to their connection to their diety-progenitor Matriarch and all other krig, they quickly positioned themselves as assets throughout most of the continent. Their overall numbers are much lower than the other major humanoid races of Omeria, and it’s rare to find one more than 1,000 miles from the Maze at Orbea.

All krig share the same parent, the enigmatic Matriarch, who remains hidden in the unfathomable depth of the Weysevain Maze. As such, krigs are asexual, and are neither male nor female, although many, for simplicity’s sake—and to avoid the stigma of being referred to as an “it”—will choose one or the other as their identifier. All krig are connected to the Matriarch and loyal only to her above all else.

Mostly welcome in Omeria for their insight, intuition, and ingenuity, there are those who suspect that all krig are secretly sleep agents working under the orders of the unseen Matriarch. The majority of krig operate in positions of power or close to those who have it, creating a “tangled web” of connections and allies. Extremists even go as far to connect krig to the Hand of the Eight prophecies, as they are all eight-limbed beings with eight eyes.

Krigs have no identity of their own, only their position. As such, they are given no names by the Matriarch, nor do they give names to themselves. Instead, close allies and friends give them names, typically to reflect their role or status, or just to help them identify the krig among its siblings.

Your krig character has a number of traits in common with all other krig.

Age. Krigs reach maturity quickly, typically within 1 or two years of hatching. Those who survive the initial culling of the krig matriarch can live long lives, typically to 150 years or longer. Some krigs have been known to live for even longer, hundreds of years or more.

Alignment. Krigs favor neutrality above all else, but tend to follow the laws of humanoid civilizations of which they become a part.

Size. Krigs stand just a little over 7 feet in height and weigh nearly 300 pounds. Your size is medium.

Hivemind. As a member of the krig hive mind, you share the same bond that all krigs do: “My loyalty is always to the matriarch and the hive.” As long as you are on the same plane of existence as the krig matriarch, you can seek her advice. You can use this feature to seek advice from the matriarch. You can cast the spell augury without expending a spell slot. Once you use this feature to cast this spell, you can’t do so again for 30 days.

Experienced Climber. You have a climbing speed of 30 feet and you have advantage on ability checks made to climb or jump.

Standing Leap. You can jump twice the normal distance, though you can’t jump farther than your remaining movement would allow.

Extra Arms. You have a pair of small arms at the center of your chest. You can grasp things with these arms which have a reach of 6 feet, and you can use them to lift a number of pounds equal to three times your Strength score. You can use it to do the following simple tasks: lift, drop, hold, push or pull an object or a creature, or open and close a door or a container. Your extra arms provide a +2 bonus to all checks you use to grapple another creature but not to escape a grapple. Your GM might allow other simple tasks to be added to that list of options.

Your extra arms can’t wield weapons or shields or do anything that requires manual precision, such as using tools or magic items or performing the somatic components of a spell.

Languages. You can speak, read, and write common and you can speak orb, the language of the krigs.

Get this race in PDF form

This content is available in PDF form to all my patrons along with another 100+ including full-length books, adventures, player options, and more. Be sure to check it out!