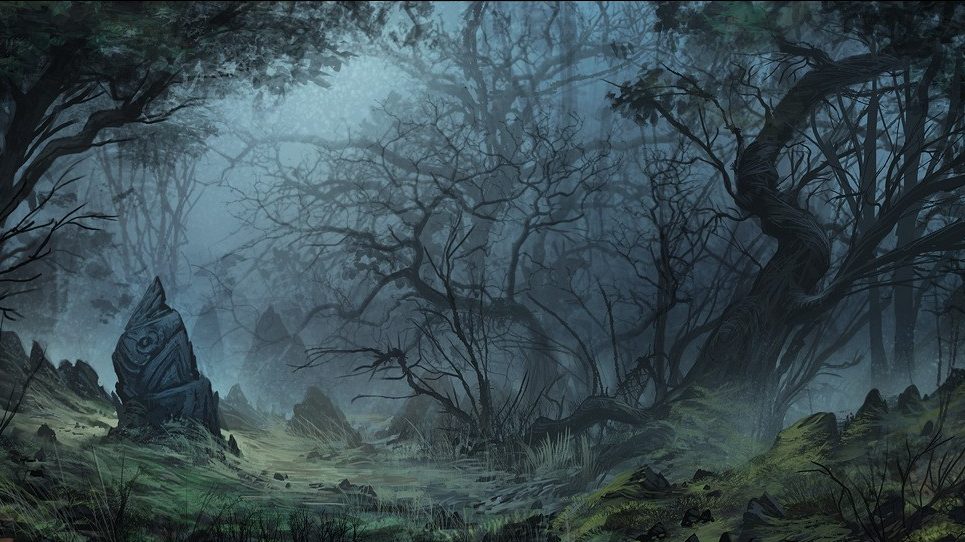 In July, I offered up free monster requests to all my patrons which would appear in BroadSword Monthly #2. And boy did they deliver!

Here are those monsters.

If you’d like to see your requests made by DMDave, join up as a patron. It’s only $3 to become a member and there’s always a special theme each month (for August, it’s alien races).

At home in bogs and forests, especially during or just after a forest fire, the lost child is a malevolent fey that looks like a child. It draws in its victims with a luring wail, like that of a harpy. Once the child is discovered by its targets, it kisses its victims, removing their life-essence, transforming them into a patch of stinking, brown mold.

Shapechanger. The lost child can use its action to polymorph into a Small humanoid child, or back into its true form, an ugly, toad-like creature covered in moss. Its statistics are the same in each form. Any equipment it is wearing or carrying is transformed with it. It reverts to its true form if it dies.

Fire Absorption. Whenever the lost child is subjected to fire damage, it takes no damage and instead regains a number of hit points equal to the fire damage dealt.

Kiss. Melee Spell Attack: +4 to hit, reach 5 ft., one incapacitated or restrained creature. Hit: 22 (4d10) cold damage and the target’s Charisma score is reduced by 1d4 (minimum of 1). The reduction lasts until the target finishes a short or long rest. If the target’s Charisma score is reduced to 1, it polymorphs into a mindless patch of brown mold (see chapter 5 of the DMG for details). The transformation is permanent until a greater restoration spell or similar magic restores the creature’s Charisma.

Luring Wail. The lost child cries. Every humanoid within 300 feet of the child that can hear its wail must succeed on a DC 12 Wisdom saving throw or be charmed until the wail ends. The child must take a bonus action on its subsequent turns to continue wailing. It can stop wailing at any time. The wail ends if the lost child is incapacitated.

While charmed by the child, a target is incapacitated and ignores the wails of other lost children. The target is also deafened; the only sound it can hear is the lost child’s wail. If the charmed target is more than 5 feet away from the child, the target must move on its turn toward the lost child by the most direct route, trying to get within 5 feet. It doesn’t avoid opportunity attacks, but before moving into damaging terrain, such as lava or a pit, and whenever it takes damage from a source other than the child, the target can repeat the saving throw. A charmed target can also repeat the saving throw at the end of each of its turns. If the saving throw is successful, the effect ends on it.

A target that successfully saves is immune to this lost child’s wail for the next 24 hours.

Werewasps are devilish creatures that enjoy causing pain and strife. As humanoids, werewasps have black eyes and thick, spikey hair covering their body. Often, they are hunched over, and their hips and buttocks appear deformed. Their arms and legs are thin and boney.

Werewasps carefully select prey to infect with their disease, preferring those that will act as subordinates in their machinations.

Shapechanger. The werewasp can use its action to polymorph into a wasp-humanoid hybrid or into a giant wasp, or back into its true form, which is humanoid. Its statistics are the same in each form. Any equipment it is wearing or carrying isn’t transformed. It reverts to its true form if it dies.

Dive Attack (Hybrid or Wasp Form Only). If the werewasp is flying and dives at least 30 feet straight toward a target and then hits it with a melee weapon attack, the attack deals an extra 3 (1d6) damage to the target.

Sting (Hybrid or Wasp Form Only). Melee Weapon Attack: +4 to hit, reach 5 ft., one creature. Hit: 5 (1d6 + 2) piercing damage plus 10 (3d6) poison damage. And if the target is a humanoid, it must succeed on a DC 10 Constitution saving throw or be cursed with werewasp lycanthropy.

A character who becomes a werewasp retains his or her statistics, except with the changes detailed under the “Player Characters as Lycanthropes” sidebar on the Lycanthrope listing in the MM. In addition, the character gains a Dexterity of 14 if his or her score isn’t already higher, and the werewasp’s Dive Attack trait. The werewasp’s sting counts as a finesse weapon.

Kobolds are proficient in working together as a group, using the darkness plus their ingenuity and inventiveness to their advantage. But when the kobolds are unable to thwart those who trouble them, they call on dark powers to defend them.

The Many is an ancient kobold demi-god. In its true form, it appears as an incorporeal ball of light. The ball of light absorbs kobolds near it, combining the scaly humanoids into a single, giant kobold with hundreds of arms, legs, and snapping beaks. It then charges after its enemies, smashing them to bits with its arms made of kobolds.

Sunlight Sensitivity. While in sunlight, the Many has disadvantage on attack rolls, as well as on Wisdom (Perception) checks that rely on sight.

Disassemble. If The Many is reduced to 0 hit points, twelve kobolds rise from its remains.

One From Many. The Many has advantage on Wisdom (Perception) checks and on saving throws against being blinded, charmed, deafened, frightened, stunned, and knocked unconscious.

Slam. Melee Weapon Attack: +11 to hit, reach 10 ft., one target. Hit: 19 (3d8 + 6) bludgeoning damage, and if the target is a creature it is grappled (escape DC 17). While a creature is grappled, it is restrained and takes 14 (4d6) piercing damage at the start of each of its turns. The Many can grapple up to two creatures at a time.

Shed. When the Many is subjected to bludgeoning damage, it sheds 1d4 kobolds if it has at least 40 hit points. The kobolds appear in an unoccupied space within 10 feet of The Many and act on their own initiative count.

The mawngrel is a vile fiend from the abyss that has the rough shape of a dog. Upon closer inspection, it’s obvious that it is anything but. The mawngrel’s head is a single, gaping maw, and a mesmerizing, dull, gray light shines from within. It has three, bulging blank eyes in its neck. In place of paws, the mawngrel has a mess of tightly-bound tentacles that constantly writhe like a swarm of worms.

Typically, Mawngrels are used by demons to drag escaped petitioners back to the Abyss.

Magic Resistance. The mawngrel has advantage on saving throws against spells and magical effects.

Maw Light. If a creature starts its turn within 5 feet of the mawngrel and it can see into the mawngrel’s mouth, the mawngrel can force the creature to make a DC 15 Wisdom saving throw or be frightened for 1 minute. While frightened, the creature drops what it is holding and falls prone. If the save fails by 5 or more, the target also ages 1d6 x 10 years. A frightened target can repeat the saving throw at the end of each of its turns, ending the frightened condition on itself on a success. If a target’s saving throw is successful or the effect ends for it, the target is immune to this mawngrel’s Maw Light for the next 24 hours. The aging effect can be reversed with a greater restoration spell, but only within 24 hours of it occurring.

A creature that isn’t surprised or incapacitated can avert its eyes to avoid the saving throw at the start of its turn. If it does so, it makes attack rolls against the mawngrel with disadvantage. If it looks at the mawngrel in the meantime, it must immediately make the save. Undead and fiends are immune to this effect.

Puppeteer slugs are horrific creatures that enter a humanoid’s skin and crawl towards its brain. Once the slug attaches to the creature’s brain stem it takes control of it. Then, it begins to secrete larvae into the creature’s bloodstream. After a short incubation period, the larvae hatch from the creature’s chest, burrowing their way out. The “mother slug” aims for this to happen in populated areas so her spawn can take as many humanoids with it as possible before retreating back underground.

Bites. Melee Weapon Attack: +0 to hit, reach 0 ft., one creature that has a brain in the swarm’s space. Hit: The target is infested by a puppeteer slug. At the start of each of the target’s turns, the target takes 3 (1d6) piercing damage plus 4 (1d8) psychic damage. Applying fire ot the bite wound before the end of target’s next turn deals 1 fire damage to the target and kills the puppeteer slug. After this time, the puppeteer slug is too far under the skin to be burned.

If a target infested by a puppeteer slug ends its turn with 0 hit points, it falls unconscious as the puppeteer slug attaches itself to the base of the creature’s skull. The slug then takes total control of the target’s body and the target remains unconscious as long as the puppeteer slug remains attached. While attached, the slug can’t be targeted by any attack, spell, or other effects, and it retains its Intelligence, Wisdom, and Charisma scores, as well as its understanding of Deep Speech and its telepathy. It otherwise adopts the target’s statistics, and it knows everything the creature knew, including spells and languages. The slug also lays its eggs in the target’s bloodstream.

Over two weeks, the slug’s larvae grow and take over the internal organs of its host. In the 24-hour period before giving birth, the host’s body has visible signs of the slugs crawling under its skin. It has disadvantage on Charisma checks made to interact with other creatures and its speed is halved. At birth, the creature’s flesh bursts open and a new swarm of puppeteer slugs appear in the nearest unoccupied space within 5 feet of it. The controlling slug and the host body then die.

If the host body dies before the slug’s larvae come to term, the puppeteer slug must leave the host. A lesser restoration spell or similar disease-curing magic cast on the body drives the slug out and disintegrates the slug’s larvae. By spending 5 feet of its movement, the slug can voluntarily leave the body, teleporting to the nearest unoccupied space within 5 feet of it. The body then regains consciousness in 1d4 rounds.