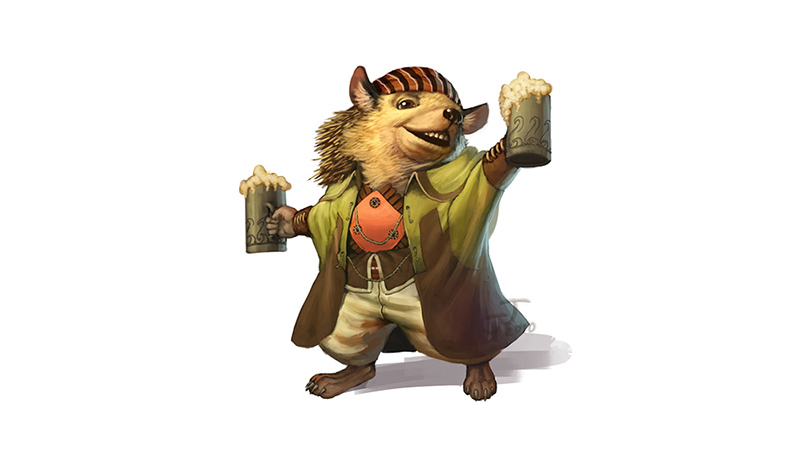 Also known as hedgehogfolk, pokees are famous for their love of the finer things in life such as tasty beverages, warm socks, and the company of good friends. Certainly, they’re not the strongest, wisest, or fastest of the small humanoid races, but their presence is always felt and admired.

Sadly, there are not many pokees left in the world. The few that are around live just south of Ammathluir. Their celebratory and joyous nature resonates well with the halflings that hail from that side of Lurien.

On the odd ocassion that pokees do travel away from home or take on the mantle of the adventurer, it’s usually in the form of a traveling minstrel, healer, or even a sorcerer or warlock. Unimpressed with loot and treasures, Pokees delight more in the thrill of the adventure itself and the anecdotes each encounter offers.

Quills. When the pokee takes the Dodge action, in addition to the normal benefits of Dodge, a creature that touches the pokee or hits it with a melee attack while within 5 feet of it takes 2 (1d4) piercing damage.

Pokees will be included as a Dungeons & Dragons Fifth Edition entry in a new book I’m working on for DMsguild.com titled, simply, CR 1/8.

If you like the pokee’s stat block, then get the word out by sharing it. Click one of the buttons below.