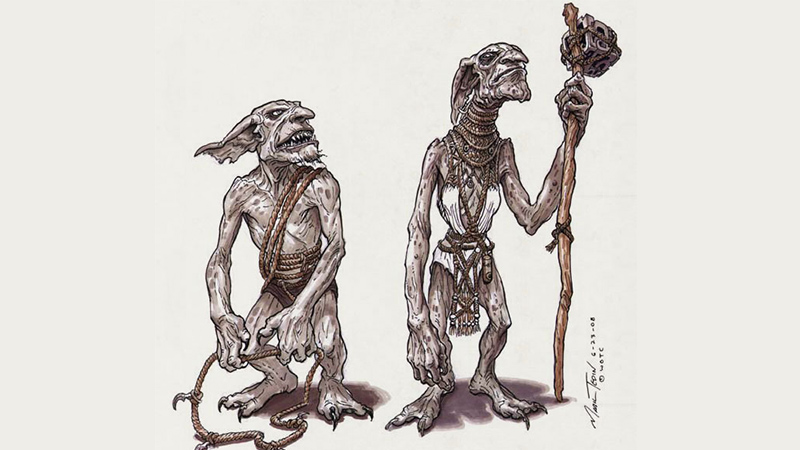 In the dark parts of the world where few dare to travel there are all sorts of hungry horrors lurking and waiting. Of course, the only thing worse than the monsters themselves are the creatures who’ve adapted to being around such monstrosities. Such is the case with the strange humanoid race known as shreyas.

Also called longneck goblins, shreyas are a cannibalistic race of swamp-dwellers. Shreya tribes are small and rarely venture much further than their tribal grounds. Because shreyas make their homes in such dangerous locations, they’ve learned to build their bases around the entrances to popular (and dangerous) places of interest where adventurers are likely to go. This strategy provides them a neverending supply of food as they use recycled traps, trained monsters, and other dismantled dungeon features to capture “dinner.”

Despite being somewhat experienced dungeon delvers themselves, shreyas have little interest in the wealth dungeons and ruins offer. Adventurers who are clever or lucky enough to get past these tribal buggers often discover entire ransacked dungeons with disabled traps, liberated monsters, and piles of ignored loot. The only exceptions are magic items, which the shreyas have discovered make the best trap components.

Monster Whisperer. As a bonus action, the shreya targets one Beast or Monstrosity with an Intelligence score of 4 or lower within 30 feet of it. If the target can see or hear the shreya, the target must succeed on a DC 11 Wisdom saving throw or be charmed by the shreya. The charmed target regards the shreya as a trusted friend to be heeded and protected. Although the target isn’t under the shreya’s control, it understands the shreya’s verbal commands and it takes the shreya’s requests or actions in the most favorable way it can. Each time the shreya or its companions do anything harmful to the target, it can repeat the saving throw, ending the effect on itself on a success. Otherwise, the effect lasts 24 hours or until the shreya is destroyed, is on a different plane of existence than the target, or takes a bonus action to end the effect.

Impromptu Trap (3/day). The shreya quickly assembles a trap and leaves it in its current space. The shreya does not have to remain in or near the trap’s space in order for the trap to work. If a creature did not see the shreya build the trap (ie, the shreya was fully concealed or hidden), the trap requires a DC 11 passive Wisdom (Perception) or passive Intelligence (Investigation) check to notice it. A creature that uses its action to find the trap has advantage on this check. In addition, a creature can use a successful DC 11 Dexterity check using thieves tools to disable the trap or can destroy it by making a successful attack roll against it (the trap has AC 10 and 1 hp, and is immune to poison and psychic damage). If a creature walks into the same space as the trap, it must succeed on a DC 11 Dexterity saving throw or take 3 (1d6) damage of a type specified by the shreya at the time of the trap’s creation, either bludgeoning, piercing, or slashing, and the trap is destroyed.

If you like the shreya’s stat block, then get the word out by sharing it. Click one of the buttons below.

Shreyas will be included as a Dungeons & Dragons Fifth Edition entry in a new book I’m working on for DMsguild.com titled, simply, CR 1/8.