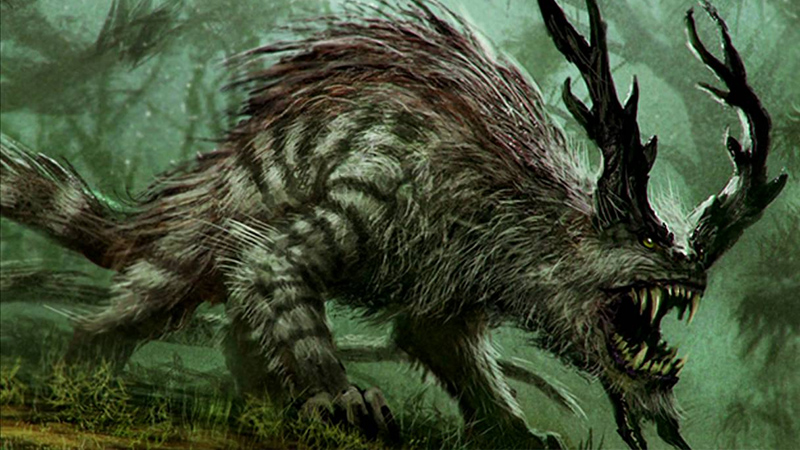 The old speakers give it a name: roggel lunts. Old talk for “hidden one.” With a name, it has a body. And with a body, it can taste the edge of our spears.

The beast is long. Easily five or six giantkin in length. A mouth filled with teeth the size of fingers. Brutal horns, capable of knocking the tallest yew down. It can see through us all with its small, burning eyes, and steps into a warrior’s thoughts, stabbing with the ghost memories.

Charge. If the roggel lunts moves at least 20 feet straight toward a target and then hits it with a horn attack on the same turn, the target takes an extra 14 (4d6) damage. If the target is a creature, it must succeed on a DC 22 Strength saving throw or be knocked prone.

Keen Smell. The roggel lunts has advantage on Wisdom (Perception) checks that rely on smell.

Worry. The roggel lunts makes one bite attack against a Large or smaller creature it is grappling. If the attack hits, the grapple ends, the target takes 30 (4d10 + 8) piercing damage plus 30 (4d10 + 8) bludgeoning damage, and is thrown 30 feet in a random direction landing prone.

Thunder Wave (Recharge 5-6). The roggel lunts magically emits a wave of thunderous energy in a 60-foot cone. Each creature in the area must make a DC 21 Constitution saving throw or take 31 (7d8) thunder damage and is stunned for 1 minute on a failed save, or half as much damage on a successful one and isn’t stunned. A creature can repeat the saving throw at the end of each of its turns, ending the effect on itself with a success.

Something about that image above inspired me to create this creature. I knew that I wanted to create a tough, gargantuan beast, but not have it be as tough as say, a tarrasque or ancient dragons.

Now, just to put it to task.