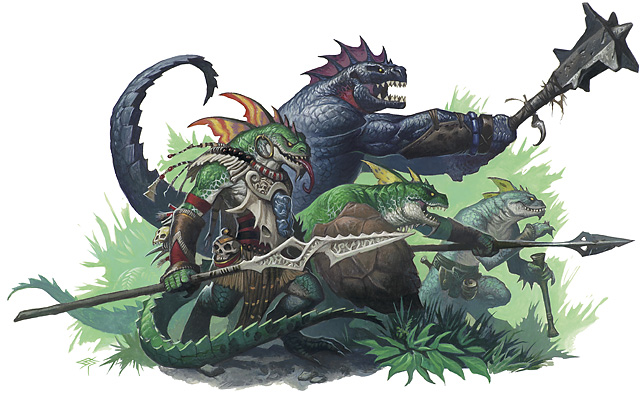 This is a continuation of my scalable NPC/monster series where, instead of just creating all new monsters for Fifth Edition, I create rules to make it easy for anyone (including myself) to scale them up or down.

Oddly, I haven’t used a lot of lizardfolk in Fifth Edition. However, I’ve gotten a considerable number of requests for lizardfolk. And seeing as how they make a pretty significant appearance in the new Ghosts of Saltmarsh book, it felt like a good time to crack them open.

What’s unique about the king/queen is that it’s actually a part-demon; it’s touched by a demon lord named Sess’inek who seeks to corrupt and control lizardfolk. These demon-blooded scaleheads are tough, smart, and mean.

For the lizardfolk progression I created here (they’re “scale-able”… get it?) I made it so that the warriors flow into the king/queens.

How to Scalable Monsters work?

If you haven’t already seen my last article on scalable NPCs, be sure to check it out.

The long and short of it is that instead of creating a brand new monster for each and every challenge rating you have, instead, you just adjust the monster based on your target CR. It’s kind of like having “levels” but for monsters. So if you need a CR 9 lizardfolk, just reference the Lizardfolk chart below, see what adjustments you need to make and features you need to add and presto: a brand new lizardfolk.

The lizardfolk’s starting statistics are identified on page 204 of the Monster Manual.

As the lizardfolk’s CR increases, it gains the following special traits.

Starting at CR 1/2, the lizardfolk can hold its breath for 15 minutes.

Starting at CR 1, once per turn, when the lizardfolk makes a melee attack with a trident and hits, the target takes an extra 7 (2d6) damage, and the lizardfolk gains temporary hit points equal to the extra damage dealt. The amount of damage the lizardfolk deals with this trait increases as it CR increases as shown on the Skewer column on the Scalable Lizardfolk table.

At CR 2, the lizardfolk’s demonic nature is revealed and it undergoes a metamorphosis. It gains the following benefits.

Starting at CR 6, the lizardfolk has proficiency in Strength saving throws.

At CR 7, the lizardfolk goes through another transformation, doubling in size. It gains the following benefits:

Beginning at CR 10, the lizardfolk’s attacks are magical.

At CR 11, when the lizardfolk takes damage from a creature that is within 5 feet of it, it can use its reaction to make a bite attack against that creature.

At CR 13, the lizardfolk gains proficiency with Charisma saving throws.

At CR 14, the lizardfolk can innately cast fog cloud at will. In addition, it can cast control weather once per day.

At CR 17, the lizardfolk goes through a final metamorphosis, changing it into a demon. The lizardfolk gains the following benefits:

At CR 20, the lizardfolk’s abyssal blood boils. It gains the following benefits:

Get the PDF on DMDave’s Patreon

This article and more than 25 others are available to patrons. In addition, when you sign up, you get a 56-page PDF titled EVIL.