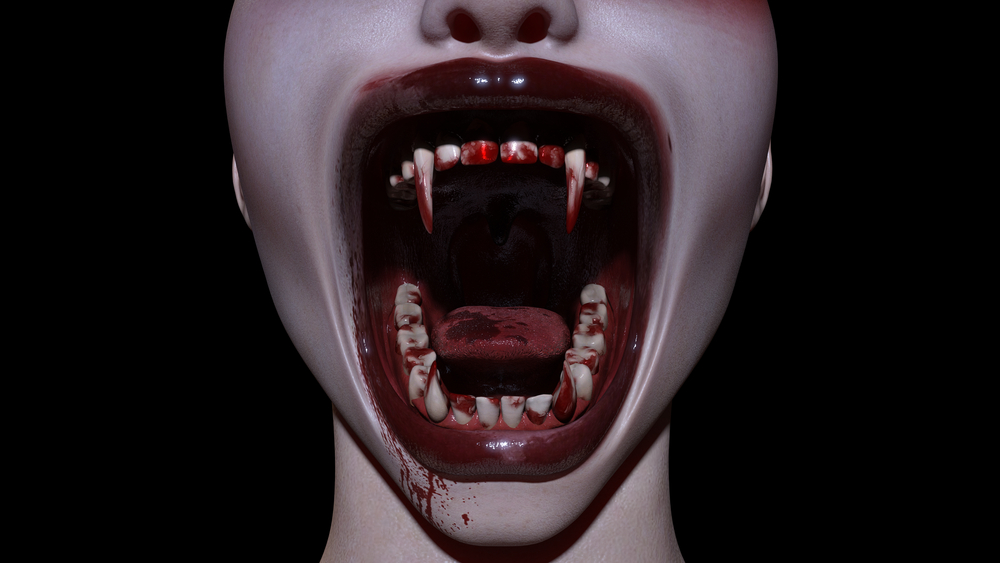 The world of Wandrossa continues to expand. With each request that Patrons put in, the lore and flavor of the world are altered. And those that are in on the “ground floor” really get a hand in developing this unique campaign setting.

The name comes from a second jaw they have that is split, as in the jaw does not connect at a chin or anything. The teeth on this jaw are sharp and are to prevent live prey from escaping the mouth. They have no cheeks so their second jaw and teeth in general are exposed and obvious. They have an extremely fast metabolism, where a normal race needs three meals per day a Splitjaw needs ten.

Splitjaws can temporarily slow their metabolism by means of a chemical reaction from consuming meat from the sentient humanoid creatures, doing this allows them to only eat one meal per day. The sheer amount of food they would need to sustain a community of Splitjaws, on top of the ever-present temptation to calm their hunger, means they tend not to live in their own societies. Instead the Splitjaws that wish to be a part of a society, and not just run around eating whatever they can find, hide inside other societies. They hide due to the Splitjaws that either do not care about society and only seek to satiate their hunger, or those that tried to fit in but succumb to the temptation, driving a fear of Splitjaws into the hearts of others.

Physically they look similar to Humans, with the exception of the second jaw and generally slimmer build due to their metabolism. They can live for longer than humans if they can manage to keep up with their hunger. The struggle to not only hide their identity but also to resist and sustain their ravenous hunger is the eternal struggle of the Splitjaws that wish to live among and fit in with society. For a visual reference, Mileena from Mortal Kombat is a decent example of what they might look like.

Concept art from MKX even shows how the jaw would look/function. Although she’s a decent example it’s not perfect, but it’s the best I’ve found and it gets the idea across. Thanks in advance!

Spooky! I went ahead and checked out the concept art for Mileena in MKX. It’s pretty cool. Here is how I see the race’s traits playing out.

As a splitjaw, your character has the following traits:

Age. Splitjaws mature at the same rate that humans do, but live slightly longer. A splitjaw can live up to 120 years.

Alignment. As societal castaways, splitjaws resent law and order and tend towards chaos. Despite their monstrous appearance, splitjaws have no racial preference toward good or evil.

Size. Splitjaws stand between 5 and 6 feet tall and weigh 120 pounds on average. Your size is Medium.

Bite. Your fanged maw is a natural weapon, which you can use to make unarmed strikes. If you hit with it, you deal piercing damage equal to 1d6 + your Strength modifier, instead of the bludgeoning damage normal for an unarmed strike.

Crowd Blend. You are good at hiding in a crowd as long as your face is covered. When moving through a crowd, creatures have disadvantage on all Wisdom (Perception) checks to notice you.

Hungry Jaws. In battle, you can throw yourself into a vicious feeding frenzy. As a bonus action, you can make a special attack with your bite. If the attack hits, it deals its normal damage, and you gain temporary hit points (minimum of 1) equal to your Constitution modifier. You can’t use this trait again until you finish a short or long rest.

Menacing. You gain proficiency in the Charisma (Intimidation) skill.

Splitjaw Resilience. Thanks to your fast metabolism, you have advantage on saving throws against poison, and you have resistance against poison damage.

Languages. You can speak, read, and write Common and Abyssal.

Become a Wandrossan Worldbuilder on Patreon!

When you become a patron, you get to help us create the world of Wandrossa. Your requests get made, free for you to use however you like (non-commercially), and added to the lore of the world.

In addition to requests, you also receive all PDFs (excluding major Kickstarter releases), swag, the ability to vote in polls, videos, and more.