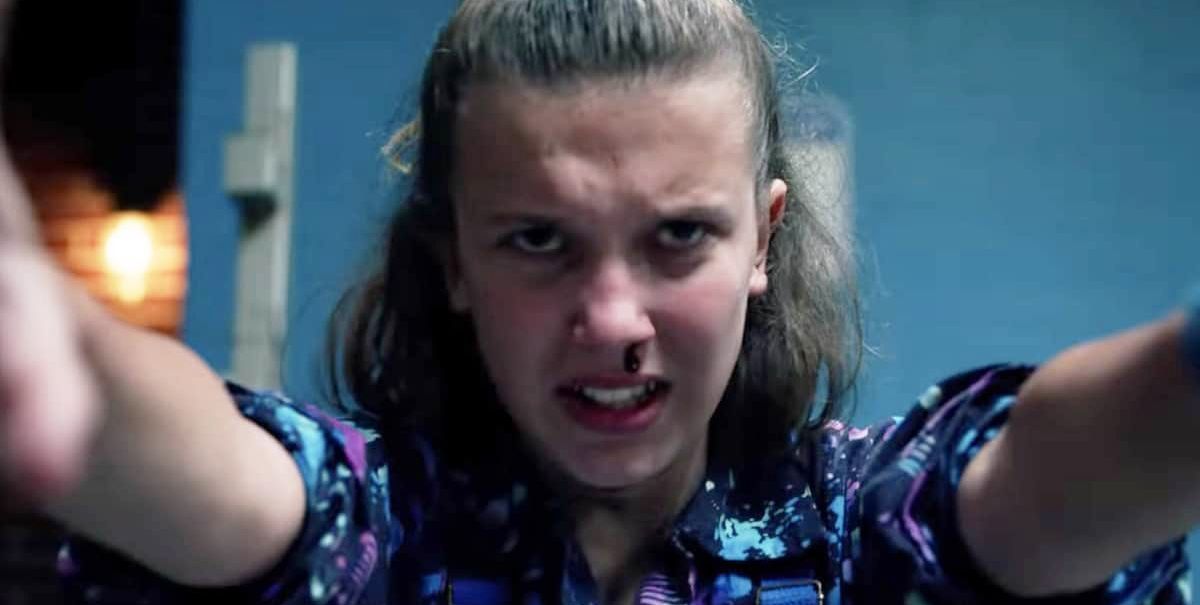 Jane “El” Hopper (born Jane Ives), better known as Eleven, is one of the main protagonists of Stranger Things. Her character is portrayed by Millie Bobby Brown.

Eleven was kidnapped and raised in Hawkins National Laboratory, where she was experimented on for her inherited psychokinetic abilities. After escaping the lab, she was found by Mike, Lucas, and Dustin. Upon discovering her abilities, Mike believed that she could help find Will, their missing friend. During their time together, she and Mike formed a strong bond and quickly grew to like each other. It was ultimately revealed that, in a lab experiment, she made contact with a creature from another dimension, accidentally opening an inter-dimensional gateway. In an attempt to protect her friends, Eleven eventually faced and destroyed this monster in a showdown at Hawkins Middle School, mysteriously vanishing in the process.

Eventually, she was found to be alive, secretly living with Jim Hopper at his grandfather’s old cabin. After she grew impatient from being separated from her friends, Eleven went on a journey by herself, discovering her past in the process. Realizing that she could not leave her friends behind, she returned to Hawkins, reuniting with them, to help defeat yet another extra-dimensional threat. Eleven was then taken in by Hopper as his adopted daughter. This also allowed her to attend the Snow Ball dance with Mike.

During the summer of 1985, Eleven’s romantic relationship with Mike continued to blossom, much to Hopper’s dismay who took steps to complicate it. This resulted in Eleven forming an unlikely friendship with Max. Upon learning that the Mind Flayer had reappeared to stop her and get revenge on her friends, where it began flaying Billy and other people in Hawkins, so she joined her friends to defeat it. Amidst the ensuing fight to stop the Mind Flayer, Eleven lost her powers. Following Hopper’s apparent death, she was taken in by the Byers family. Three months later, before moving out of Hawkins with the Byers, Eleven and Mike made plans to visit each other at Thanksgiving while also professing her love for him.

Void Projection (Psionics). Eleven can project her astral body into the Void. She leaves her material body behind, which is conscious and able to speak; however, she is incapacitated and blind in regard to her own physical form. While in the Void, Eleven’s innate spellcasting ability is Charisma (spell save DC 13). She can innately cast the following spells requiring no components, targeting only creatures she can see in the void:

Over Exertion. Eleven’s Telekinetic Thrust and certain spells (marked with an asterisk) take a physical toll on Eleven’s mind and body. After using one of these spells, roll a d20. On a roll of 1, Eleven gains 1 level of exhaustion.

Telekinetic Thrust*. Eleven targets a creature or unattended object within 30 feet of her. A creature must be Huge or smaller to be affected by this magic, and an object can weigh up to 5,500 pounds.

If the target is a creature, Eleven makes a Charisma check contested by the target’s Strength check. If Eleven wins the contest, she hurls the target up to 30 feet in any direction, including upward. If the target then comes into contact with a hard surface or heavy object, the target takes 1d6 damage per 10 feet moved.

If the target is a Medium or smaller object that isn’t being worn or carried, Eleven hurls it up to 30 feet in any direction. Eleven can use the object as a ranged weapon, attacking one creature along the object’s path (+5 to hit) and dealing 5 (2d4) bludgeoning damage on a hit.

If the target is a Large object that isn’t being worn or carried, Eleven hurls it up to 15 feet in any direction. Any object in the space the object lands in must succeed on a DC 13 Strength or Dexterity saving throw (target’s choice) or be knocked prone and take 10 (3d6) bludgeoning damage. On a successful save, the creature takes only half the damage, isn’t knocked prone, and is pushed 5 feet out of the object’s space into an unoccupied space of the creature’s choice. If no unoccupied space is within range, the creature instead falls prone in the object’s space.