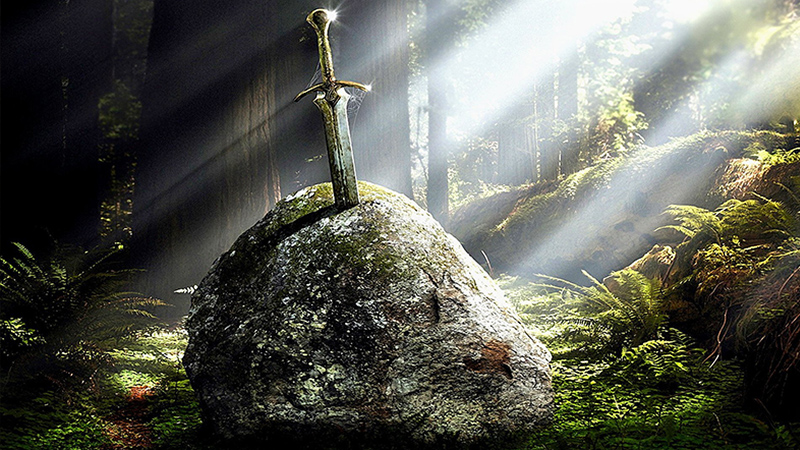 Here we are with the first entry for Season Two of Stat Anything where I take the readers’ and Instagram followers’ suggestions and turn them into people, places, and things for Dungeons & Dragons 5e. It’s time to stat up the legendary sword of King Arthur, Excalibur.

Excalibur (/ɛkˈskæləbər/), or Caliburn, is the legendary sword of King Arthur, sometimes also attributed with magical powers or associated with the rightful sovereignty of Britain.

Some other fun tidbits about Excalibur:

Excalibur and its Scabbard

Excalibur is a magic longsword that grants a +3 bonus to attack and damage rolls made with it and deals an extra 3d10 radiant damage to fiends and undead. The sword can only be wielded by the rightful heir to the throne of Britain.

Random Properties. Excalibur and its scabbard have the following random properties:

Increased Charisma. After spending at least 10 days attuned to the sword, your Charisma score increases by 2, to a maximum of 22. You can’t gain this benefit from the sword more than once.

The Light of Thirty Torches. Once per day, the sword emits a brilliant light that has the potential to blind all hostile creatures in a 120-foot radius centered on the sword. Each hostile creature in that area that can see the sword must make a DC 17 Constitution saving throw or become permanently blinded.

Properties of Excalibur’s Scabbard. While the scabbard is in your possession and you are attuned to Excalibur, you gain the following benefits:

Destroying Excalibur. As long as England and its crown exist, Excalibur cannot be destroyed. However, if one were to return it to the Lady of the Lake, it would temporarily vanish from existence for 1d100 years.

Excalibur! I can already hear the chants from O Fortuna! Put on your shiniest armor and go to war!

Next up, I’ll be recreating the Cave of Wonders from Aladin. Should be fun!

2 thoughts on “Stat Anything: Excalibur for Dungeons & Dragons Fifth Edition”