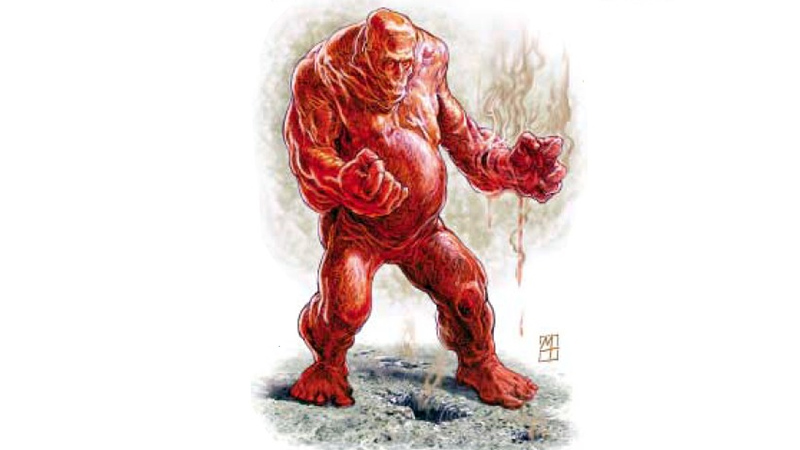 Earlier today, while I was waiting to pick Jack up from school, I was flipping through the Fifth Edition Monster Manual looking for some monster inspiration. I landed on the clay golem, which are pretty cool and a little underused, I think.

Sure, they’re probably the second weakest of the MM golems (just behind the flesh golem), but they have some cool abilities.

I like to create creative combinations for monsters like this, because when I see something like “acid absorption” it says to me “duh, pair them with acid monsters.”

Clay golems are basically brutes, too. Even though their haste power gives them extra AC and bonuses on Dex, it’s still a brute. It just becomes a harder-to-kill brute.

So the clay golem is going to need some quicker support, too.

What monsters in the Monster Manual have acid attacks (not including the ones that swallow)? Well, not very many, unfortunately.

Here are the ones I found:

Kind of a limited selection, right? Of those four, the black dragons make the most sense since they swing towards evil, are smart, and can fly.

Here are some options you can create fairly easily:

Doing some basic homebrewing, you could also create a half-black dragon humanoid that deals acid damage which would make sense. Something that’s good at keeping distance like a goblin with its Nimble Escape or something that can fly (winged kobold or even a kobold sorcerer make the most sense thematically) are good ideas for this.

Acid splash is fun because it’s only a cantrip that requires a Dexterity saving throw and it can hit two targets for 1d6 damage. This works great because a lot of your melee folks that are going to be 1v1’ing the clay golem are probably going to have lousy Dexterity saves. Just keep hitting both the melee combatant and the golem (having it fail on purpose) and it’s like two birds with one acidic stone! Acid splash has a decent range on it, too, of 60 feet, which can help keep your squishy guys out of reach.

Melf’s isn’t nearly as good since it only affects one target, so unless you’ve got somebody blowing second level spell slots to heal a golem (which would be dumb), it doesn’t make nearly as much sense to use it.

This would be a lot cooler if the acid splashed into an area, but unfortunately, it’s ranged attack only. Still, it’s not the worst idea ever.

Finally, creating a room full of acid traps would be fun. Imagine vats or pools of acid all around and a golem that can easily walk through them? Meanwhile, the PCs have to carefully walk (or jump!) to avoid falling into the acid themselves.

Maybe really make it a pain in the ass with terrain that doesn’t stand still!

Of course, this blog wouldn’t be what it is if I didn’t create monsters to accompany clay golems.

Referencing the third edition Monster Manual, there was a pretty cool golem variant called an alchemical golem. From the text:

The body of an alchemical golem is composed of a single tough, transparent membrane in the shape of a humanoid, with the face usually mimicking the appearance of its creator. Inside the membrane is a swirling collection of toxic, oily chemicals, which merge and separate at random, and give the creature life. An alchemical golem wears no clothing and has no possessions. Despite the membrane that keeps the ingredients inside, the golem gives off a faint, acrid smell.

Basically, they’re a human-shaped bag of hazardous materials, ie toxic waste golems. But what’s cool about them is that they have an acid breath weapon that’s a 15-foot cone! Plus, touching them causes acid damage, too. And since I’m a mean DM, I’m going to make them corrode armor, as well. Muahaha!

The Swamp of Oblivion lies between the mud hills of the Plane of Earth and the silt flats of the Plane of Water. While there are many oozes that call this dank region home, there are also bizarre, nasty, little elementals composed of caustic materials known as acid mephits that live there, too.

There’s a strange offshoot of goblins that live in the Underdark called oxies. For whatever reason, the oxies are immune to acid damage; because of this they frequently work closely with black dragons around pools of caustic substances. Oxies are short, hairless creatures with deep olive skin and an extra arm growing from their backs. Oh, and they hate elves so much, it puts them in a frenzy whenever they see one.

Corrosive Form. A creature that touches the golem or hits it with a melee attack while within 5 feet of it takes 3 (1d6) acid damage. Any nonmagical piercing or slashing weapon made of metal that hits the golem corrodes. After dealing damage, the weapon takes a permanent and cumulative -1 penalty to damage rolls. If its penalty drops to -5, the weapon is destroyed. Nonmagical ammunition that deals piercing or slashing damage and is made of metal that hits the golem is destroyed after dealing damage.

Acid Breath (Recharge 5-6). The golem exhales caustic acid in a 15-foot cone. Each creature in that area must make a DC 17 Dexterity saving throw, taking 17 (5d6) acid damage on a failed save. In addition, nonmagical armor worn by the target is partly dissolved and takes a permanent and cumulative -1 penalty to the AC it offers. The armor is destroyed if the penalty reduces its AC to half. On a successful save, the target takes half damage and its armor isn’t affected.

Death Burst. When the mephit dies, it pops with a splash of acid. Each creature within 5-feet of the mephit must succeed on a DC 11 Dexterity saving throw or take 4 (1d8) acid damage.

False Appearance. While the mephit remains motionless, it is indistinguishable from an ordinary pool of acid.

Acid Breath (Recharge 6). The mephit exhales a 15-foot cone of acid. Each creature in that area must make a DC 11 Dexterity saving throw, taking 7 (2d6) acid damage on a failed save, or half as much damage on a successful one.

Next, I just need to build my acid trap room so I can plug in some of these baddies. Definitely thinking about doing an acid vat room with narrow, rocking catwalks, and either the kobold sorcerers armed with acid splash or the acid mephits.

If you like the monsters you found here, be sure to share them on social media to help get the word out. It only takes a minute and it’s much appreciated.