Stat Anything: Jafar from Aladdin for 5e D&D 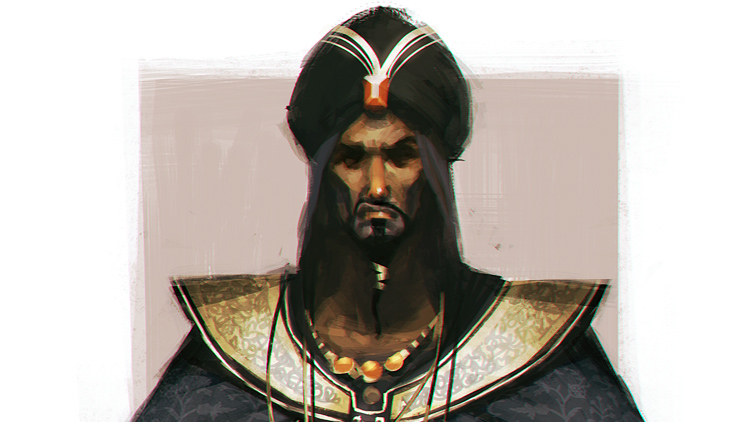 DM Dave1 Comment on Stat Anything: Jafar from Aladdin for 5e D&DPosted in Fun Stuff

Woohoo! Just hit 2,500 followers on Instagram! Thanks so much to everyone that followed and clicked through, and thanks to those who gave me some wild suggestions for people and things to stat.

In this first edition of Stat Anything, I’ll be statting up Jafar from Aladdin. And to make things really interesting, I’m going to do all three versions of him from the 1992 film:

Thanks to Instagram follower @dndmbainum for the fun suggestion!

Statting Jafar from Aladdin is no easy task. The shrewd villain from Disney’s 1992 animated film Aladdin–as well as one of the stars of Kingdom Hearts–actually has multiple ways of presenting himself in the film. So when Instagram user @dndmbainum suggested him, I was like, “Okay… but which one?”

But like everything I do on this blog, I said, “Why settle with one? When I can do all three!”

First up is Jafar the Vizier. This is the Jafar from the start of the film, working as the underhanded Rasputinesque adviser to the Sultan. He didn’t really have any powers of his own other than his serpent staff and high stats in Charisma-based skills, but he’s fun nonetheless. Personally, I like villains that have limited powers, but accomplish a lot regardless.

Later, when Jafar got a hold of the lamp and the genie, he made a wish to become the world’s most powerful sorcerer. That’s when things got really interesting. He demonstrated nearly unlimited power: he could levitate objects, breathe fire, summon objects, and transform himself and others. In addition, he also was immune to the effects of fire, as evidenced by his passing through the flames generated by him before transforming himself into a giant Cobra (Disney Wikia, Jafar). This was Jafar the Sorcerer Supreme. And he’s about as tough as spellcasting BBEGs get.

Finally, Jafar used his last wish to turn himself into a genie. Hence Jafar the Genie. As a genie (efreeti if you will) Jafar was even more powerful than he was as Sorcerer Supreme. Unfortunately, being a genie comes with the burden of the lamp and the enslavement that comes with it.

As usual, these variants are free to use in your 5e D&D campaigns. Just not commercially (I’m pretty sure Disney will kick your ass anyways). And the art isn’t mine… borrowed!

Special Equipment. Jafar wields a serpent staff, which acts as a +1 quarterstaff with additional magical properties. As an action, Jafar can activate any one of the following properties while attuned to the staff provided he has the weapon drawn:

Special Equipment.  Jafar wields a serpent staff, which acts as a +1 quarterstaff with additional magical properties. As an action, Jafar can activate any one of the following properties while attuned to the staff provided he has the weapon drawn:

Dragon Wings. As a bonus action, Jafar sprouts a pair of dragon wings from his back, gaining a flying speed of 30 ft. They last until Jafar dimisses them with another bonus action. Jafar can’t manifest the wings while wearing armor unless the armor is made to accommadate them, and clothing not made to accommodate his wings might be destroyed when he manifests them.

Fire Affinity. When Jafar casts a spell that deals fire damage, he can add his Charisma modifier to one damage roll of that spell.

Magic Resistance. Jafar has advantage on saving throws against spells and other magical effects.

Spellcasting. Jafar is a 20th-level spellcaster. His spellcasting ability is Charisma (spell save DC 19, +11 to hit with spell attacks). Jafar has the following sorcerer spells prepared:

Frightful Presence. Each creature of Jafar’s choice that is within 60 feet of him and aware of him must succeed on a DC 19 Wisdom saving throw or become frightened for 1 minute. A creature can repeat the saving throw at the end of each of its turns, ending the effect on itself on a success. If a creature’s saving throw is successful or the effect ends for it, the creature is immune to Jafar’s Frightful Presence for the next 24 hours.

Fire Breath (Recharge 5-6). Jafar exhales fire in a 30-foot cone. Each creature in that area must make a DC 17 Dexterity saving throw, taking 24 (7d6) fire damage on a failed save, or half as much damage on a successful one.

At-Will Spell. Jafar casts one of his at-will spells.

Cast Spell (Costs 2 Actions). Jafar casts one of his spells of 4th level or lower.

Melee Attack. Jafar makes a melee attack with his staff.

Elemental Demise. If Jafar dies, his body disintegrates in a flash of fire and puff of smoke, leaving behind only equipment he was wearing or carrying.

Grant Wishes. Jafar may grant up to 3 wishes to one creature that is attuned to Jafar’s Lamp, and Jafar can expend his limit of wishes on the owner only once in that creature’s existence. To be granted a wish, the owner of the lamp must be within 60 feet and state a desired effect to Jafar. Jafar must then use his action to cast the wish spell on the owner’s behalf to bring about the effect. Jafar may try to pervert the intent of the wish by exploiting the wish’s poor wording. The perversion of the wording is usually crafted to be to Jafar’s benefit. If Jafar is freed from his lamp, he loses this trait.

Lamp Binding. Jafar must remain within 300 ft. of Jafar’s Lamp at all times. Jafar may not exit his lamp unless the owner of the lamp summons him, and he may not return to his lamp unless he is dismissed by the owner, the owner dies, or the owner makes 3 wishes. When inside his lamp, Jafar has total cover against attacks and other effects outside the lamp. If Jafar is freed from his lamp, he loses this trait.

Frightful Presence. Each creature of Jafar’s choice that is within 120 feet of him and aware of him must succeed on a DC 21 Wisdom saving throw or become frightened for 1 minute. A creature can repeat the saving throw at the end of each of its turns, ending the effect on itself on a success. If a creature’s saving throw is successful or the effect ends for it, the creature is immune to Jafar’s Frightful Presence for the next 24 hours.

At-Will Spell. Jafar casts one of his at-will spells.

Move. Jafar moves up to half his movement.

Here are two new magic items for you to use in your D&D 5e campaigns; just not commercially!

This ordinary oil lamp made from brass appears mundane. In reality, it holds a powerful greater efreeti named Jafar the Genie inside. The lamp weighs 1 pound.

As long as you are attuned to the lamp and have not previously used 3 of Jafar’s wishes, you can use an action to rub the lamp to summon Jafar the Genie. Once summoned, Jafar appears in an unoccupied space within 15 feet of the lamp. Jafar is friendly to you and your companions, and he acts on your turn. Furthermore, Jafar may not willingly hurt you. You can use a bonus action to command how Jafar moves and what action he takes on his next turn, or to give Jafar general orders, such as to attack your enemies. In the absence of such orders, Jafar acts in a fashion appropriate to his nature. Jafar remains until you or he dies or until you dismiss Jafar as an action.

Jafar may also grant to you and you alone 3 wishes, so long as you remain attuned to the lamp. Once Jafar grants the third wish to you he immediately returns to the lamp, plus your attunement to the lamp ceases and you may not attune yourself to the lamp again. However, another creature that has not previously used up 3 of Jafar’s wishes may attune themselves to the lamp. You may use one of Jafar’s wishes to set Jafar free. Once freed, Jafar loses his Lamp Binding and Grant Wishes traits.

Jafar is not obligated to remain friendly to you nor follow your commands if he is freed or if you are no longer attuned to the lamp.

Staff, rare (requires attunement by a sorcerer, warlock, or wizard)

This staff can be wielded as a magic quarterstaff that grants a +1 bonus to attack and damage rolls made with it.

The staff has 10 charges for the following properties. It regains 1d6 + 4 expended charges daily at dawn. If you expend the last charge, roll a d20. On a 1, the staff loses its properties and becomes a nonmagical quarterstaff.

Spells. You can use an action to expend 1 or more of the staff’s charges to cast one of the following spells from it, using your spell save DC: disguise self (2 charges), hypnotic pattern (4 charges).

And here’s a bonus monster that you can use, too. Just not commercially!

Mimicry. Iago can mimic animal sounds and humanoid voices. A creature that hears the sounds can tell they are imitations with a successful DC 15 Wisdom (Insight) check.

This is the first time I’ve ever taken a request and I gotta say it was pretty fun. Of course, as usual, I went overboard, so I hope you enjoy the fruits of my labor!

Anyways, if you haven’t already, sign up for updates using the opt-in box on the side column or down in the footer.

1 thought on “Stat Anything: Jafar from Aladdin for 5e D&D”