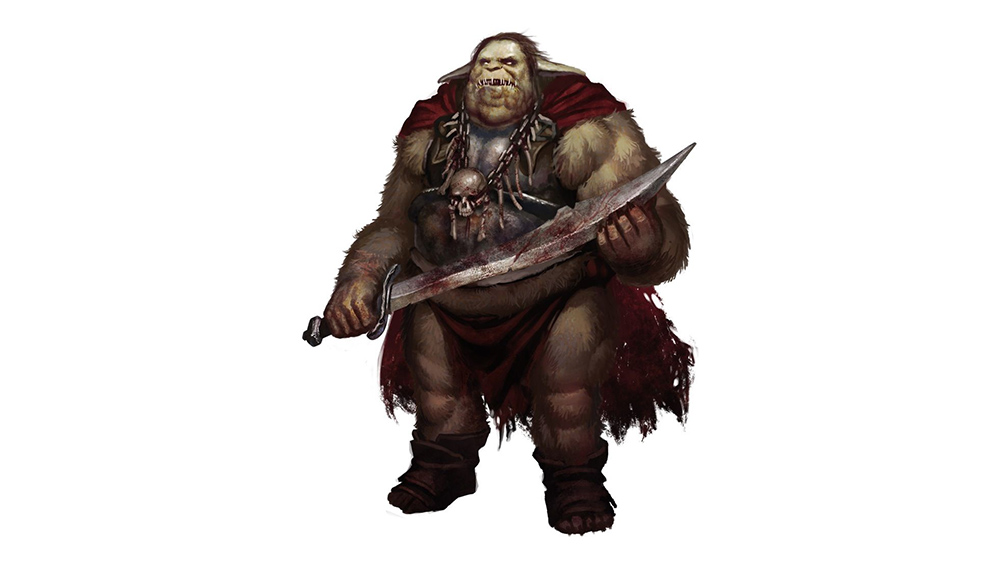 If there was ever an official “first level boss” in Dungeons & Dragons, it’d have to be bugbears. They’re the bigger, grumpier, and harder-hitting cousins of the goblinoids. Basically, sasquatches with a morningstar.

And I love ’em. Needless to say I’m excited to make some much-needed bugbear variants.

What is a bugbear?

Heh, so if you put “bugbear” into Google, it spits out a pair of definitions:

Now, the latter makes sense for sure. But I had no idea that it was also a cause of obsessive fear, irritation, and loathing. That’s cool!

Checking out bugbear lore, looks like they originated in Germany, Wales, and England as a forest bogey man. Apparently, the etymology for bugbear and bogeyman both share the German root, too: bögge. Neat!

In Dungeons & Dragons lore, bugbears have been around since the Greyhawk boxed set, debuting alongside beholders. Here’s what a first edition bugbear looked like:

Bugbears have since been in every edition. In fifth, Bugbears act as the muscle for goblin tribes.

Bugbears have interesting fluff, too. They’re big and strong and sneaky. But they’re also lazy AF. They worship a pair of brother gods named Hruggek and Grankhul. Hruggek gives them their strength whereas Grankul gives them their stealth. And if they’re not careful, Skiggaret, the bogeyman of the bogeymen, will possess them and put them at odds with the bros by turning them into total cowards. That damn Skiggaret!

How do bugbears fight in 5e?

Bugbears are total one-monster wrecking crews for early-level adventurers. They’ve got above average Strength, Dexterity, and Constitution. They’re also sneaky as hell with an impressive +6 bonus to Dexterity (Stealth) checks. Plus, if they manage to catch the PC’s flat-footed, they deal an additional 2d6 damage during the surprise round. Couple that with their Brute bonus, and suddenly there’s a bigfoot swinging a morning star for 20 (2d8 + 2d6 + 2) damage. Wowzas!

The Monsters Know What They’re Doing‘s Keith Ammann pretty much lays them out as “rarrrr BASH BASH BASH” monsters. They go for the surprise first, then it’s melee attacks ’til whatever they’re hitting is dead. And they’re not smart or wise enough to know the difference between different types of threats. For bugbears, it’s all just “hit what’s close and let Hruggek sort ’em out.”

What 5e bugbear variants are needed?

When reviewing the bugbear, I realized that there aren’t just two bugbear variants in the Monster Manual; there’s seven. Because bugbears are goblinoids and travel with other goblinoids, goblins are going to fill the void of the “sneaky, little lesser bugbears” and hobgoblins represent the “elite warrior bugbears.”

Therefore, we probably need to expand upon bugbears and their relationship to their gods.

I love the story of the two brother gods. And I think that’s where I’ll start. Bugbears are supposed to pay homage to both, and if they fail in their duties with one or the other they’ll either get a lightning bolt in the arse (thanks, Hruggek) or struck with sudden blindness (thanks, Grankhul). I imagine that if a bugbear pulls too far to one side and basically says “screw it!” accepting the fate given by the opposite god-brother, they’ll trade in some of their traits for amped-up versions of the others. In other words, I’ve got two cool variants right there.

Finally, reading up on Realms Lore, it appears that Hruggek follows Maglubiyet who follows Bane. Confusing, right? But ol’ Maggie and Bane are both vicious Gods of Tyranny. If you’re going to move up in the world and don’t want to get smote by Hruggek and/or Grankhul, why not just go straight to the top, to Bane? That’s probably one bad ass bugbear.

Okay, there’s already boggles in D&D. And they kinda scratch the “there’s something under my bed, mommy!” itch of D&D. But what about something truly terrible that lurks in the forest? A bugbear that’s a feral savage that lives up to all the legends? Slinking between the trees, eating children, the works?

Yeah… let’s make that guy, too.

First up we’ve got the bugbear that’s forsaken Grankhul for Hruggek. Grankhul struck the bugbear blind, but no worries, Hruggek had his back. This blind bugbear is stronger, fiercer, and afraid of absolutely nothing. Introducing the bugbear berserker.

On the opposite end of the spectrum is the bugbear champion of Grankhul, the bugbear stalker. While its fully embraced the lethargic ways of Grankhul, it is also the stealthiest of all bugbears, capable of sneaking up and dealing massive damage to its target. Just hope that it manages to kill whatever it’s fighting before it dozes off.

Skiggaret’s chosen–the poor bastard–isn’t necessarily a weaker bugbear. Just a bugbear that uses its cowardice to its advantage. This is a bugbear craven.

The most tyrannical of all the bugbears are those that see themselves at the top of the pile. They look beyond the brothers past Maglibuyet and into the black hand of the God of Darkness himself, Bane. And even then, they aspire to take Bane’s own place. Thankfully, these bugbear tyrants are rare.

Finally, we’re taking it back to Germanic lore with the bögge, a horrible, devolved bugbear that slinks through forests looking for weak prey. Stuff of nightmares, folks.

Brute. A melee weapon deals one extra die of its damage when the bögge hits with it (included in the attack).

Keen Smell. The bögge has advantage on Wisdom (Perception) checks that rely on smell.

Surprise Attack. If the bögge surprises a creature and hits with an attack during the first round of combagt, the target takes an extra 10 (3d6) damage from the attack.

Blind. The bugbear can’t see and automatically fails any ability check that requires sight. Attack rolls against the bugbear have advantage, and the bugbear’s attack rolls have disadvantage.

Brute. A melee weapon deals one extra die of its damage when the bugbear hits with it (included in the attack).

Heart of Hruggek. The bugbear has advantage on saving throws against being charmed, frightened, paralyzed, poisoned, stunned, or put to sleep.

Assassinate. During its first turn, the bugbear has advantage on attack rolls against any creature that hasn’t taken a turn. Any hit the bugbear scores against a surprised creature is a critical hit.

Grankhul’s Luck (1/day). If the bugbear must make an ability check, attack roll, or saving throw and has disadvantage on the roll, it may choose to cancel the disadvantage for that roll instead.

Leap to Feet. Whenever the bugbear is prone it can stand up by spending 5 feet of movement instead of half its speed.

Lethargic. The bugbear can not use reactions. In addition, the bugbear can take either an action or a bonus action on its turn, not both.

Multiattack. The bugbear makes three scimitar attacks. Immediately after the attacks, the bugbear falls unconscious as if under the effect of the sleep spell. The bugbear remains unconscious until the end of its next turn, it takes damage, or someone uses an action to shake or slap it awake.

Faux Fumble (Recharge 4-6). The bugbear makes a scimitar attack. Immediately after the attack, the bugbear gains the benefit of the Disengage action and its walking speed increases by 10 feet until the end its current turn.

Aura of Hate. The bugbear, and any fiends and undead within 10 feet of it, gain a bonus to melee weapon damage rolls equal to to the bugbear’s Charisma modifier (included in the attack). A creature can only benefit from one Aura of Hate at a time.

Brute. A melee weapon deals one extra die of its damage when the bugbear hits with it (included in the attack).

Divine Smite (1/day). The bugbear channels divine energy through its weapon. When the bugbear hits a creature with a melee weapon attack, it can add 13 (3d8) radiant damage to the attack. The damage increases by 1d8 if the target is a fiend or undead.

Spellcasting. The bugbear is a 7th-level spellcaster. Its spellcasting ability is Charisma (spell save DC 13, +5 to hit with spell attacks). The bugbear has the following paladin spells prepared:

Surprise Attack. If the bugbear surprises a creature and hits it with an attack during the first round of combat, the target takes an extra 7 (2d6) damage from the attack.

This has definitely been one of the more interesting series of variants I’ve done. You’ll definitely need to have a tongue-and-cheek sense of humor to play a few of these guys. But you serious DMs out there, the tyrant and bögge are true threats for low-to-mid tier PC’s.

As always, be sure to follow by subscribing to the updates list on the right sidebar or down in the footer.

And if you have any comments or suggestions, let me know in the comments below.

Up next, we’re going into land shark territory with bullettes!