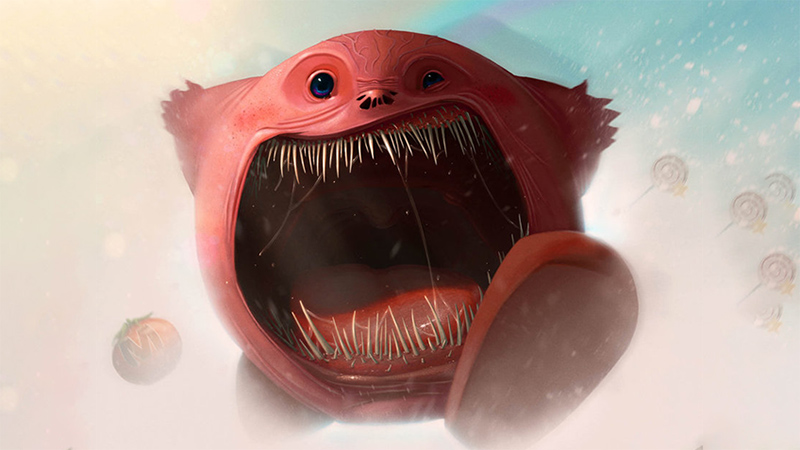 Welcome back to Stat Anything, where I take suggestions of fictional characters (or things) and give them stats so you can play them in your Dungeons & Dragons Fifth Edition campaigns.

Honestly, Kirby kinda works extremely well for my current campaign. My PC’s are about to enter a “dreamland”, and well… that’s totally Kirby’s turf.

From the ol’ Wikipedias:

Kirby (カービィ Kābī, Japanese pronunciation: [kaːbiː]) is a fictional character and the titular protagonist of the Kirby series of video games owned by Nintendo and HAL Laboratory. As one of Nintendo’s most famous and familiar icons, Kirby’s round appearance and ability to copy his foes’ powers has made him a well-known figure in video games, consistently ranked as one of the most iconic video game characters.

Basically, Kirby is a little, round pink dude that eats things and spits them out or keeps them swallowed and temporarily gets their powers.

If I remember correctly, he would hold the things in his mouth for a while. If he didn’t end up spitting it out, he’d end up digesting it.

OMFG, if that doesn’t sound like an amazing Dungeons & Dragons monster I don’t know what does.

How to create Kirby for Dungeons & Dragons Fifth Edition

When I took on this request from Instagram user @connor_vp_23, I had a great idea in mind for what I wanted. First, I didn’t want Kirby to be good. I wanted him to be scary.

The tricky part, however, is how do I determine what powers he gains when he eats someone? I think the easiest way to do that is to simply break it down per each ability score and what sort of powers make sense.

For Strength, he’d get bigger and stronger a la the enlarge/reduce spell. For Dex, he’d get haste. Constitution gives him damage resistances. And so on.

And I don’t know about you guys, but I’m seriously going to be throwing this thing at my PC’s like… right away.

Limited Flight. While Kirby has a swallowed creature inside him, he cannot fly.

Innate Spellcasting (with a swallowed Intelligent creature inside him only). Kirby’s innate spellcasting ability is Constitution (spell save DC 15). He can innately cast the following spells, requiring no material components:

At will: mage hand
2/day each: magic missile, shield
1/day each: fireball

Swallow. Kirby inhales a Medium or smaller target that is within 5 feet of him. The targeted creature must make a DC 15 Strength saving throw, or becomes swallowed by Kirby. While swallowed, the target is blinded and restrained, it has total cover against attacks and other effects outside Kirby, and it takes 14 (4d6) acid damage at the start of each of Kirby’s turns. Kirby can have only one creature swallowed at a time.

If Kirby takes 20 damage or more on a single turn from the swallowed creature, Kirby must succeed on a DC 14 Constitution saving throw at the end of that turn or regurgitate the creature, which falls prone in a space within 5 feet of Kirby.  If Kirby dies, a swallowed creature is no longer restrained by him and can escape from the corpse by using 15 feet of movement, exiting prone.

Luring Song (with a swallowed Charismatic creature inside him only). Kirby sings a magical melody. Every humanoid and giant within 300 feet of Kirby that can hear the song must succeed on a DC 15 Wisdom saving throw or be charmed until the song ends. Kirby must take a bonus action on his subsequent turns to continue singing. He can stop singing at any time. The song ends if Kirby is incapacitated.

While charmed by Kirby, a target is incapacitated. If the charmed target is more than 5 feet away from Kirby, the target must move on its turn toward Kirby by the most direct route, trying to get within 5 feet. It doesn’t avoid opportunity attacks, but before moving into damaging terrains, such as lava or a pit, and whenever it takes damage from a source other than Kirby it can repeat the saving throw. A charmed target can also repeat the saving throw at the end of each of its turns. If the saving throw is successful, the effect ends on it.

A target that successfully passes its saving throw is immune to Kirby’s song for the next 24 hours.

Well, that’s pretty terrifying, eh? Just imagine walking around and this pink glob comes up to you. It’s cute with its high Charisma score, so you don’t think much of it.

But then it eats you. NOM! And then drops a fireball on you!

Oh man, is this thing going to be fun to toss at my players this Saturday.

3 thoughts on “Stat Anything: Kirby for Dungeons & Dragons Fifth Edition”