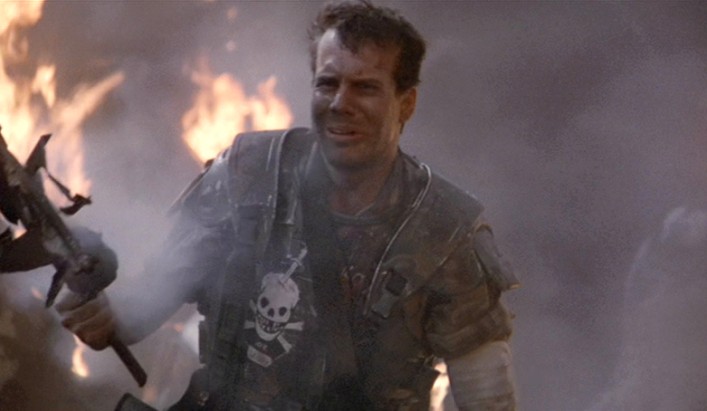 Private First Class William L. Hudson was a combat technician in the United States Colonial Marine Corps, part of 2nd Battalion Bravo Team. He was a member of the combat unit deployed to Acheron aboard the USS Sulaco in 2179, to investigate the sudden loss of contact with the colony of Hadley’s Hope. He was subsequently involved in combating the Xenomorph infestation at the colony.

Hudson was part of First Squad’s gun team, along with Private Vasquez. He was also the squad’s leader, although Sergeant Apone assumed nominal command for the initial operation at Hadley’s Hope. Hudson was also designated First Squad’s Motion Tracker operator. He was among the last to perish in the incident, eventually becoming host for a Xenomorph Chestburster. His body was later found by Corporal Christopher Winter from the USS Sephora during a subsequent investigation of the colony.

Special Equipment: M314 Motion Tracker. Hudson’s motion tracker can sense the presence and location of moving creatures up to 300 feet away regardless of interposing barriers.

“Get Some!” While PFC Hudson has 10 hit points or fewer, he can make a single weapon attack as a bonus action on each of his turns.

Burst Fire. Hudson sprays bullets from his pulse rifle at a point he can see within 80 feet of him. Each creature in a 10-foot-cube area centered on that point must succeed on a DC 15 Dexterity saving throw or take 13 (2d12) piercing damage. Hudson can’t use this action again until he uses an action or bonus action to reload.

“Game Over, Man!” (1/Day). Hudson can end one effect on himself that is causing him to be frightened.