Stat Anything: the Joker for 5e D&D 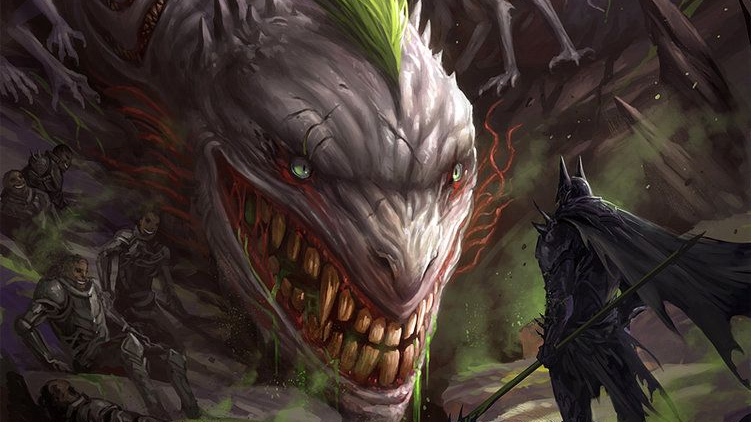 DM Dave1 Comment on Stat Anything: the Joker for 5e D&DPosted in Fun Stuff

On a lark, I created Bat Knight, Waterdeep’s answer to Batman.

But what’s Batman without his villains?

While doing a search for medieval Batman imagery, I came across this gem:

Now, if that isn’t inspiring/terrifying, I don’t know what is.

Taking cues from the picture, we can see that the Joker is gargantuan compared to the Bat Knight. Plus, his infamous laughing gas seemingly leaks from his body, causing those around him (Bruce is the exception, of course) to go mad.

Some might see this and say, “Oh, he’s a dragon.” But with all the extra smiles, arms, and tentacles, this thing is either an aberration or demon.

And not just any demon, but a demon prince.

Demon clown prince of crime? Let’s roll with it.

Demon princes are pretty well covered in Mordenkainen’s Tome of Foes. So sticking his stats in should be pretty easy. All I’ll have to do is create some Joker-style attacks and special traits for him.

Balanced by Good. When Joker is within 120 feet of at least one good or lawful aligned creature, Joker regains 30 hit points at the start of his turn. If Joker takes radiant damage, this trait doesn’t function at the start of the Joker’s next turn.

Legendary Resistance (3/Day). If Joker fails a saving throw, he can choose to succeed instead.

Magic Resistance. Joker has advantage on saving throws against spells and other magical effects.

Multiattack. Joker makes three attacks: two with its bite and one to constrict.

Laughing Gas Breath (1/day). Joker exhales poisonous gas in a 90-foot cone. Each creature in that area must make a DC 24 Constitution saving throw or take 37 (11d6) poison damage and is charmed by Joker as if the creature was under the effect of a dominate monster spell, except Joker does not need to maintain concentration. A creature with an Intelligence score of 4 or less or immune to poison isn’t affected. The effect lasts until greater restoration or a similar spell is cast on an affected target.

Move. Joker moves up to half his speed.

Laugh (Costs 2 Actions). All creatures within 120 feet of Joker must succeed on a DC 23 Wisdom saving throw or become frightened for 1 minute. A creature can repeat the saving throw at the end of each of its turns, ending the effect on itself on a success. If a creature’s saving throw is successful or the effect ends for it, the creature is immune to the Joker’s Laugh for the next 24 hours.

On initiative count 20 (losing initiative ties), Joker can take a lair action to cause one of the following effects; he can’t use the same effect two rounds in a row:

The region containing Joker’s lair is warped by his magic, creating one or more of the following effects:

If Joker dies, these effects fade over the course of 1d10 days.

If a creature goes mad in Joker’s lair or within line of site of the demon lord, roll on the Madness of Joker table to determine the nature of the madness, which is a character flaw that lasts until cured. See the Dungeon Master’s Guide for more on madness.

41-60 – “Sometimes, people are much less serious when they’re dead. It’s my job to help them get to that point.”

Another fun one to make. I could have never guessed that Joker would end up being some sort of giant snake demon thing that could drive people insane?

I’ll probably expand on this Batman series a bit in the future. But for now, you’ve got Batman and Joker ready to go for your 5e D&D campaigns. Just not commercially! And the art isn’t mine, it’s borrowed from Sandara on Deviant Art.

1 thought on “Stat Anything: the Joker for 5e D&D”