Stat Anything: Batman for 5e D&D 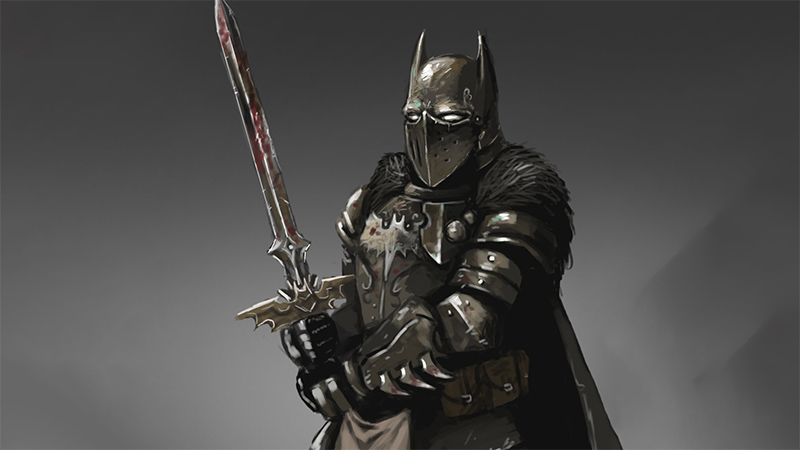 DM Dave3 Comments on Stat Anything: Batman for 5e D&DPosted in Fun Stuff

Reading through the new Waterdeep: Dragon Heist, I got a wild idea:

What if Batman lived in Waterdeep?

By day, Lord Bruce Waien is just another wealthy Waterdavian noble. As the owner of Waien Enterprises, Bruce has investments in nearly every corner of the city. He’s respected for business, but also known to be a bit of a playboy.

Of course, that’s all a cover for his true nature: he’s a vigilante that goes by the name the Bat Knight.

When night falls, Lord Bruce dons the black armor and helm of the Bat Knight and takes to the streets. He knows what evil lurks around the city and campaigns to thwart it at all costs.

Some think he’s a hero. Others think he’s a rogue. But the villains of Waterdeep know what he really is: a threat.

This was a fun one to make. While he’s super tough, Batman’s still a human. Therefore, I didn’t want to give him any stats above 18. A lot of his powers comes from his legendary magic items: helmet of the Bat Knight, armor of the Bat Knight, cloak of the bat (from the DMG), and his batarangs.

Keen readers might notice that the batarangs work similar to the orthon’s brass crossbow from Mordenkainen’s Tome of Foes.

Also, Batman is a legend. And legendary heroes get legendary actions. To represent Batman’s pure martial skills, I gave him 6 attacks per turn (3 normal plus 3 legendary). He’s a blur with his +3 greatsword. Plus, his batarangs can help him level a playing field quick.

Taking some cues from the Jarlaxle entry in Waterdeep, Batman lands right around 16 Challenge Rating mostly for his damage output and resistances.

These stats for Bruce Waien, the Bat Knight and associated magic items are free for you to use in your 5e Dungeons & Dragons campaigns. Just not commercially. And the art isn’t mine; borrowed!

Damage Immunities psychic (while wearing helmet of the Bat Knight)

Great Weapon Fighter. Whenever Bruce rolls a 1 or 2 on a damage die for an attack he makes with a melee weapon that he is wielding with two hands, he can reroll the die and must use the new roll, even if the new roll is a 1 or 2. The weapon must have the two-handed or versatile property in order for Bruce to gain this benefit.

Legendary Resistance (2/day). If Bruce fails a saving throw, he can choose to succeed instead.

Second Wind (Recharges after a Short or Long Rest). As a bonus action, Bruce can regain 20 hit points.

Superior Critical. Bruce’s weapon attacks score a critical hit on a roll of 18-20.

Attack. Bruce makes one attack with his +3 greatsword.

Move. Bruce moves up to half his speed.

Bracers of the Bat Knight

While wearing these bracers, you gain a +2 bonus to AC if you using no shield.

The Armor of the Bat Knight

You have a +3 bonus to AC while wearing this set of plate armor. In addition, the armor is made of mithril; it does not impose a disadvantage on Dexterity (Stealth) checks and does not have a Strength requirement. Finally, the armor has resistance against cold and fire damage.

The Helmet of the Bat Knight

While wearing this helm, you have truesight out to a range of 60 ft. If you already have truesight, wearing the helmet increases its range by 60 feet. Additionally, you are immune to psychic damage and have advantage on saving throws against being charmed and frightened.

Of course, now that I’ve made “Batman” I’ve got to make some bad guys, right? Well, that’s what’s next.

3 thoughts on “Stat Anything: Batman for 5e D&D”