Stat Anything: Umgru the Slayer for 5e D&D 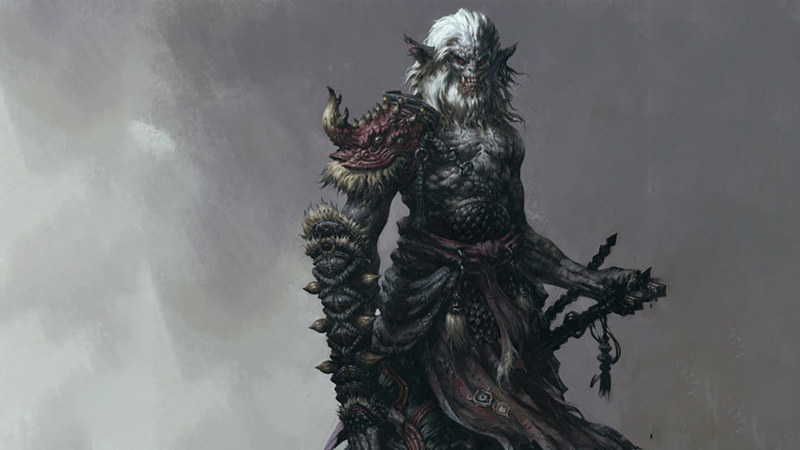 DM DaveLeave a Comment on Stat Anything: Umgru the Slayer for 5e D&DPosted in Fun Stuff

Got a request a couple weeks ago I’m finally getting around to from Instagram follower @jits_monkey, a half-orc/half-dragon battle master.

Beyond his request, I didn’t know much more than that.

Is this guy a villain? Or is he a hero?

Doing a quick search on the Googles (like I do), I found this cool image:

This art comes from game designer Du Hugh Y. You can check out his portfolio here: Du Hugh Y on Art Station.

From there, the name “Umgru the Slayer” popped into my head.

Who is Umgru the Slayer?

Having recently done research on Intelligence for monsters, I know that most orcs fall into the same Intelligence levels of Neanderthals and early Homo Sapiens. Therefore, it’s likely Umgru came from a tribal background.

Orcs have no issue with strange mix-breeds. Tannuruk, which are the demon-borne offspring of Baphomet, are honored. And there’s a whole host of freaky orc spin-offs in Mordenkainen’s Tome of Foes.

Umgru wasn’t only respected by his people, but he was beloved for his might. The bastard son of a black dragon and an orc war chief, Umgru could breathe acid and was slightly more intelligent than his peers. Despite his orcish and draconic blood, Umgru valued Wisdom over Strength. Unsurprisingly, it didn’t take long before he was granted the role as his tribe’s greatest warrior. And before he was even 15-winters-old, he was made chief.

Unfortunately, his life as leader of his people was short lived when a band of adventurers stormed Umgru’s camp and wiped out everyone there; man, woman, and child alike. Umgru was cut down himself but somehow lived. When Umgru finally regained consciousness, he discovered that his people weren’t killed for vengeance or because of something they had done. Rather, the adventurers attacked Umgru and his tribe simply because they were there. For them, it was fun.

From that day forward, Umgru promised vengeance against all who took on the role of an adventurer. He traveled the world, learning from anyone he could about how to track, trap, and defeat any dungeon delver, labyrinth looter, and monster hunter he could find.

He was Umgru the Slayer, scourge of adventurers everywhere.

With a backstory to Umgru the Slayer, I now needed to have his abilities make sense. What sort of villain could put fear into the hearts of adventurers?

He’d have to be more than just a badass melee fighter. This guy had to use tactics that could put a serious hurt on a party of adventurers. That included dealing with spellcasters, knocking out DPS, and tying up tanks.

Umgru would need to move fast, strike hard, and be able to escape as fast as possible. Going a step further, this had to be an NPC who was capable of hunting his foes, attacking them on their own turf.

Finally, I know I wanted to stay within the description given by @jits_monkey – he had to be a battle master.

Here’s what I came up with.

Umgru is free for you to use in your personal D&D fifth edition campaigns. Just not commercially. And the art isn’t mine, borrowed from Du Hugh Y on Art Station.

Special Equipment. Umgru wears +1 studded leather armor and wields a +1 longsword. Plus, he carries 5 potions of greater healing and at least one potion of resistance (see below).

Aggressive. As a bonus action, Umgru can move up to his speed toward a hostile creature that he can see.

Battle Master (4/day). When Umgru hits a creature with a weapon attack, he can choose to deal an extra 4 (1d8) damage on the attack. In addition, Umgru can choose one of the following additional effects:

Defense Fighter. While Umgru is wearing armor, he gains a +1 bonus to his Armor Class (included).

Gruumsh’s Fury. Umgru deals an extra 4 (1d8) damage when he hits with a weapon attack (included in the attacks).

Second Wind (Recharges after a Short or Long Rest). As a bonus action, Umgru can regain 14 hit points.

Acid Breath (Recharge 5-6). Umgru exhales acid in a 15-foot line that is 5 feet wide. Each creature in that line must make a DC 16 saving throw, taking 22 (5d8) acid damage on a failed save, or half as much damage on a successful one.

Parry. Umgru adds 2 to his AC against one melee attack that would hit him. To do so, Umgru must see the attacker and be wielding a melee weapon.

Here’s a quick primer on how Umgru the Slayer deals with groups of adventurers by himself.

First, Umgru always makes sure that the setting of the fight is to his liking. He prefers to fight in the dark, leaning on his blindsight and dark vision. In addition, he might set up simple traps to add an extra layer of protection. Many of the traps will be fairly well hidden, requiring DC 15 Wisdom (Perception) checks to detect. He particularly likes pit traps with greased-lined walls and hunters traps, since those tend to slow down strong (but slower) melee fighters so he can focus on the damage dealers.

Umgru always researches his opponents before entering a fight with them and will know all their strengths and weaknesses in advance.

He will have at least one potion of resistance to counteract spellcasting effects. For example, if the spellcaster is truly a specialist (such as an evoker that relies heavily on flame-based spells), he will have quaffed a potion of fire resistance ahead of time.

Knowing the limits of the party’s spellcasters, Umgru may even allow the spellcaster to exhaust many of its spells. Once the caster is mostly depleted, Umgru will recover using healing potions and Second Wind, then move in for the strike.

Next on Umgru’s list are heavy damage dealers, especially rogues. Again, keeping his distance from fighters and tanks, Umgru will hold actions with his bow to wait for those to come out of hiding, then use his battle master abilities to knock them down or cause fear (depending on the target’s weaknesses).

Umgru always avoids getting surrounded by one or more melee combatants, using Dodge and Disengage to keep his distance. If things get too bad, he’ll move into position to hit as many as he can with his acid breath, then retreat in the confusion.

If Umgru’s hit points are reduced to 130 or less, he will escape, using a preplanned exit such as a foxhole or door he can secure. He’ll then regroup and plan his next attack.

Hope you have fun playing with Umgru the Slayer. He’s definitely made for higher level groups, probably around 8th level or even higher depending on the number of traps he sets.

If there’s something else you’d like to see from Umgru, such as an adventure, or even what his typical ambush zone would look like, just let me know in the comments below.

Next, on stat anything, I have a huge list of totally random objects and monsters from one Instagram user who thought he was being clever.

… little did he know that I’m totally insane and will stat anything that’s requested of me. Muahaha!