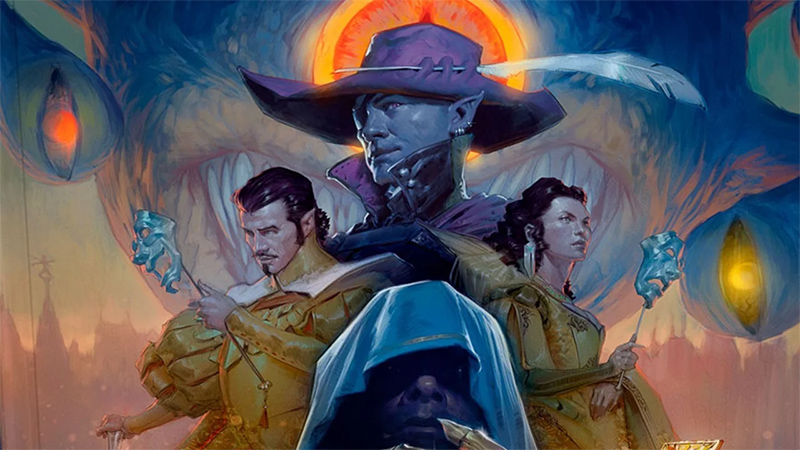 DM DaveLeave a Comment on Review of Waterdeep: Dragon HeistPosted in Articles

If you haven’t already heard, the folks over at Wizards of the Coast just released the second Dungeons & Dragons fifth edition book (of four!) for 2018, Waterdeep: Dragon Heist.

This hotly anticipated book brings to life some of the coolest characters from Forgotten Realms lore including the beholder Xanathar, the enigmatic Manshoon, and even the infamous drow swashbuckler, Jarlaxle Baenre.

And if you don’t know what I’m referring to, check it out on Amazon.com right now.

What is Waterdeep: Dragon Heist all about?

Set in the infamous city of Waterdeep, Dragon Heist is an adventure for characters of levels 1-5. In addition, it offers up a ton of fluff and detail on the Sword Coast city, showcasing its people, places, and sights.

Plus, there’s a huge fold-out map found in the back of the book that’s double-sided: one side is for the players to gawk at and the other comes with notes for the Dungeon Master.

What do you need to play Waterdeep: Dragon Heist?

As with most modern Dungeons & Dragons books, the book works with the Player’s Handbook, Monster Manual, and Dungeon Master’s Guide. Although there are a few monsters and threats that have been cribbed from other books like Volo’s Guide to Monsters and Mordenkainen’s Tome of Foes, their stat blocks have been reproduced in the appendices.

Who is Waterdeep: Dragon Heist for?

The book is primarily for Dungeon Masters to use since it’s first and foremost an adventure. Furthermore, there are no real player options in the rear of the book, either. Everything there are either magic items or NPCs. That’s one of the few things I felt this book was missing.

However, for players who are interested in learning more about the City of Splendors, the book does include a very cool chunk of fluff titled Volo’s Waterdeep Enchiridion: A Visitor’s Guide to the City’s Splendors. This gives the history of the city, its laws, whos-who, landmarks, and more.

Thanks to this book, there are no other cities in all of Faerun that have been brought to life like this one.

Unless, of course, you include Neverwinter, which gets a new video game set there every five years or so, but I digress.

How good is the adventure in Waterdeep: Dragon Heist?

Personally, I think the adventure is awesome. While it’s a bit more advanced than say, the Starter Set’s Lost Mines of Phandelver, it does give Dungeon Masters the opportunity to create a miniature-sandbox within the legendary city.

Plus, for those who’ve always wanted to hobnob with some of the “big names” in Dungeons & Dragons lore, this is definitely their chance as it gives the statistics for famous personalities like Manshoon (or his clones, I should say), Jarlaxle Baenre from the Drizz’t books, and Volothamp Geddarn.

Personally, one of my favorite characters in all of D&D is here: Xanathar the Beholder! Not only that, but he’s got his fishy, Sylgar with him, too!

I don’t know about you, but when I roleplay beholders, I give them muppet voices.

How good is the art in Waterdeep: Dragon Heist?

The only area of complaint others seem to have with the art in Waterdeep: Dragon Heist is on Dyson Logos’ maps. Dyson is an old school cartographer from Canada, who favors pen and ink style reminiscent of 1st and 2nd edition.

While some of the complaints make sense–odd angles, impossibly wide streets, etc–I still love his designs. In fact, if you’ve been following this site, you might know that I often take his commercial maps and populate them for my own adventures.

Should I buy Waterdeep: Dragon Heist?

If you’re a Dungeon Master looking for a cool adventure that will introduce your players more to the look and feel of the Forgotten Realms, and you’re experienced enough to run a sandbox, then definitely grab this book. Like I said, it’s certainly more advanced than Lost Mines of Phandelver, but also a lot cooler in many regards.

If you’re a player, this might not be the book for you. It’s got a whole lot of spoilers in it, and I imagine that much of the fluff that makes the book so cool will be available online. Or, you can just learn it all from playing the game with your favorite DM.

Right now, Waterdeep: Dragon Heist is available on Amazon at a pretty awesome 40% off the cover price: just $29.97.