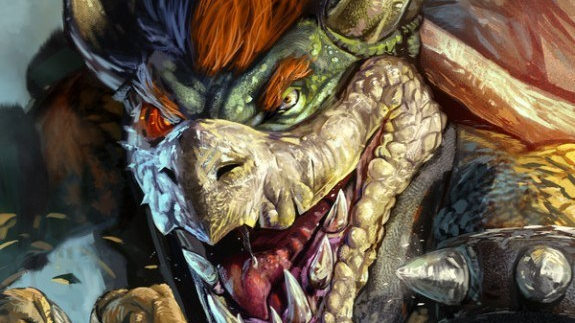 Playable tarrasques was something that I threw out to my Patrons as sort of a joke. And someone came back and asked for it. So here we are.

God help us all.

Note: a lot of this class is satirical, yet playable. Do with it what you will.

Born of tarrasques, as the name proclaims, tarrasqueborn lumber through a world that greets them with confusion and fear. Shaped by cruel gods with a wicked sense of humor, none are quite sure where or how tarrasqueborn were willed into existence. And just the idea of a tarrasque procreating with a humanoid is just too grisly to consider.

Tarrasqueborn look very much like tarrasques standing erect in humanoid form, although their heads are considerably larger than other humanoids, often comically so. They are tall and strongly built but often lumber like beasts and have large, spike-covered shells on their back.

Though all tarrasqueborn strive to be self-sufficient, they recognize that help is sometimes needed mostly because of their large, cumbersome heads and inability to judge their meals before swallowing. They choke on food a lot. Like, a lot.

Age. Tarrasqueborn grow quickly. We think. And since it’s unknown how they’re even, uh… created, it’s any one’s guess what they look like when they’re young. Plus, being so rare, there’s no telling how long tarrasque born live for; some believe they might even be immortal. Poor devils.

Alignment. Tarrasqueborn are often bestial, therefore chaotic. However, they don’t really side one way or the other between the spectrums of good and evil. They kinda just like breaking things, yelling, and eating stuff.

Size. Tarrasqueborn are taller and heavier than humans, standing upwards to 8 feet tall and weighing nearly 400 pounds (most of which is in its head). Your size is Medium.

Bite. Your large jaws make for a natural weapon, which you can use to make unarmed strikes. If you hit with it, you deal piercing damage equal to 1d6 + your Strength modifier, instead of the bludgeoning damage normal for an unarmed strike.

Magic Resistance. You have advantage on saving throws against spells and other magical effects.

Reflective Carapace. The large shell on your back can protect you from magic. If you are targeted by a magic missile spell, a line spell, or a spell that requires a ranged attack roll while you are taking the Dodge action, roll a d6. On a 1-3 you are affected as normal. On a 4-5 you are unaffected. And on a 6, you are unaffected, and the effect is reflected back at the caster as though it originated from you, turning the caster into the target.

Languages. You can speak, read, and write (poorly on all accounts) Common and Draconic.