Who Are the Characters in DM Dave’s Saturday Campaign (The Bloody Bunch)? 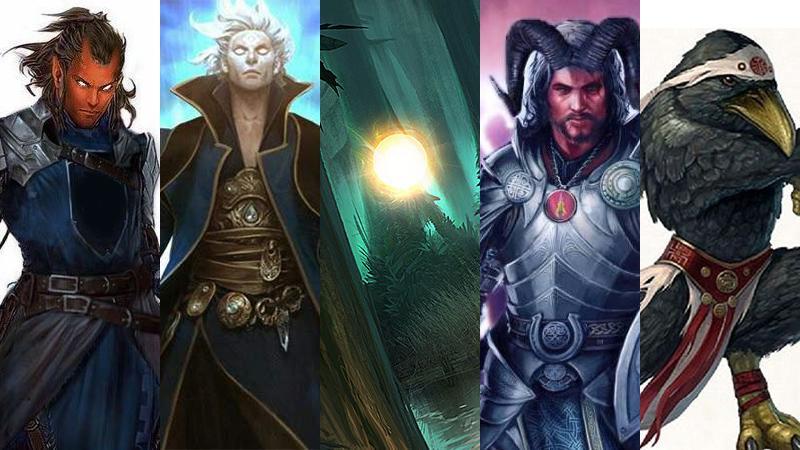 DM Dave1 Comment on Who Are the Characters in DM Dave’s Saturday Campaign (The Bloody Bunch)?Posted in Articles

I’ve been running the same campaign since March 17, 2018. And while I’ve seen a few folks go, the core group has stayed strong. I’m happy to say that I’ve had the same 5 players now for about 4 months. And that doesn’t look to change any time soon.

But who are these poor souls who have to deal with my hack DM job? Let’s find out!

Introducing the current line-up of the enigmatic group known as the Bloody Bunch.

Reverence is a tiefling paladin of Lliira. He’s been the bright-colored leader of the group since the beginning. That’s when he met Ulfgar and Betha (who are no longer with the group), Lokkar (who perished), and Amraam the Azure.

Bravery and virtue are the core of Reverence’s being. He’s never afraid to step up against a challenge, either. He’s gone face to face with dragons, fire giants, the undead, and even hordes of kruthik.

Currently, Reverence wields a devil-possessed sword named Eloise as part of a deal with an amnizu named Rongo.

Reverence is played by Joseph Petitt.

Amraam the Azure is an elven wizard of the evoker discipline. He’s snooty, impatient, and toes the line between good and evil; typical elven mage, right? Regardless, Amraam is loyal to his party. He is the only original member of the group beyond Reverence, having been a part since the beginning.

Currently, Amraam has the spirit of a dead beholder named Stzubnuk’moech’k (call him “Chuck” for short) living in his head, the unfortunate side effect of a near-death experience. The two can often be heard bickering over the best course of action. How two egos that big can fit in one head is a mystery to the other members of the group.

Amraam is played by John Wylie.

Now Vaston works for the Duke of Nightmares as the duke’s eyes and ears on the Prime Material. While the other members of the Bloody Bunch have trouble trusting their tiny, glowing friend, Vaston has proved quite effective on their recent dungeon runs.

Only time will tell if Vaston is able to free himself from this undead state.

Vaston is played by Clint Goldschmidt.

And then there’s Phil. How can one describe Phil? Phil’s a nice guy. Phil likes animals. Phil is a cleric that worships a deity named Rog. Not much else is known about Rog other than the fact that Phil worships Rog. And apparently, Rog is a thunder god.

Phil joined the group during an excursion into the Underdark, where they saved him from imprisonment by duergar. If there were a heart and soul of the group, it’d probably be Phil.

Phil is played by Jordan Tubbs.

Finally, there is Rustle the kenku monk. Rustle, upon hearing of the exploits of the Bloody Bunch, actively sought the group out. Eventually, he caught up with the group in the Underdark and has been traveling with them ever since.

Rustle is the most mysterious member of the group. He doesn’t talk about himself much and tends to keep his head down. But what secrets does the party’s birdman punching machine keep?

Rustle is played by Russell Hobson.

1 thought on “Who Are the Characters in DM Dave’s Saturday Campaign (The Bloody Bunch)?”