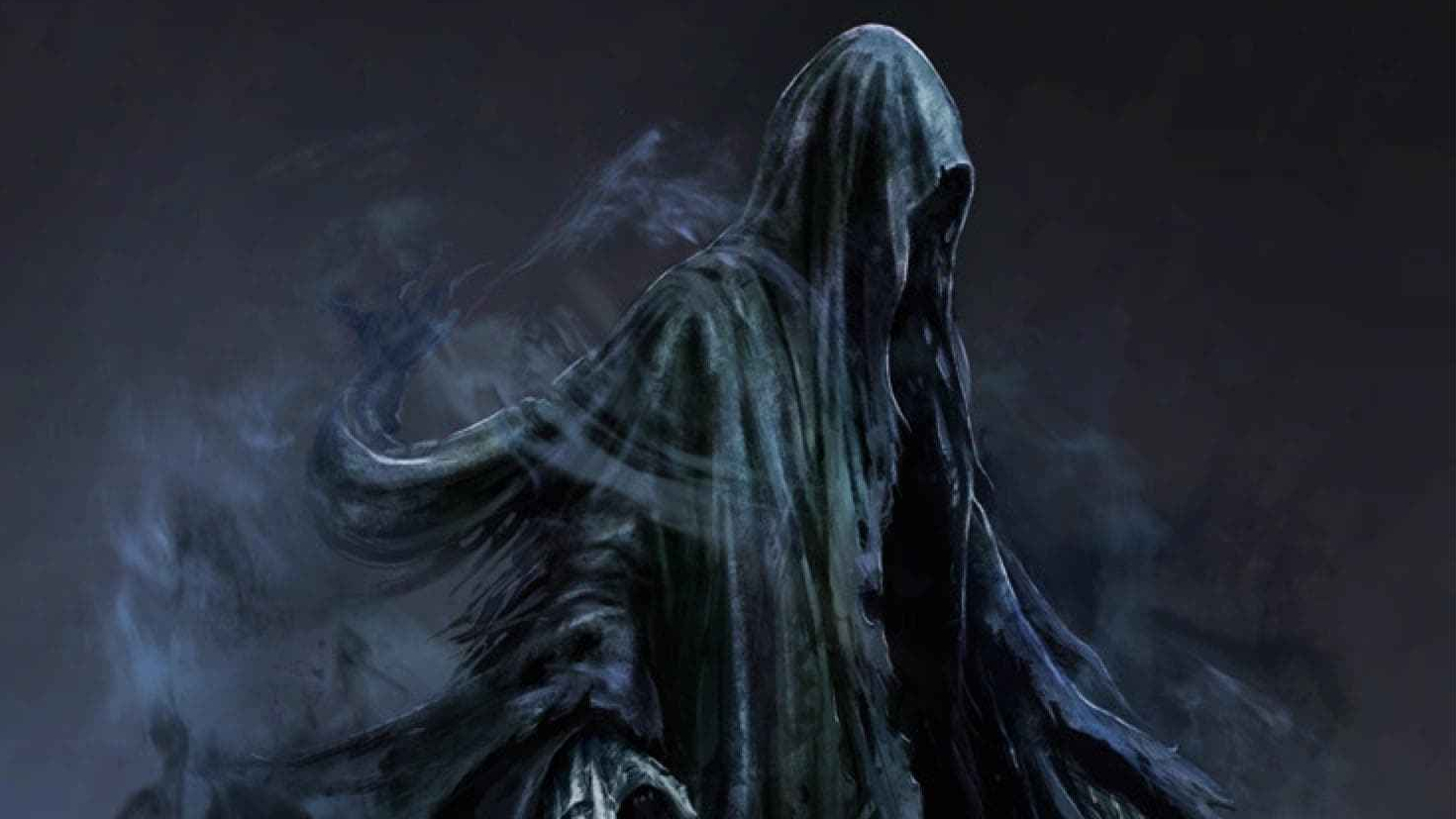 Nearly a century ago, an elven monk named Luzien worked in the Temple at the eastern side of the Forsaken Peak. Luzien was obsessed with the notion of immortality. Within the caverns of the Eyries, he studied dark rituals and necromantic rites, hoping to find a way to extend his life. When Luzien’s brothers at the Temple learned of his dark devotion, they labeled him a heathen and slew him. They buried Luzien in a soft patch of soil near the center of the Eyries.

Little did Luzien’s brothers know that Luzien had indeed discovered a way to prolong his life. Shortly after his death, Luzien rose as a wraith, his mind still intact thanks to a ring of mind shielding. Having studied apparitions, Luzien could take control of his form and evolve. Eventually, his ghost form changed, leaving behind a humanoid shape and taking on a much more horrific and amorphous appearance.

The decades weren’t kind to Luzien’s mind. Eventually, he lost all memory of his past life, desiring only to drain the souls of any live creature that dared enter the Eyries. Now, Luzien is known by the current inhabitants of the Forsaken Peak as The Master of the Peak.

The Master of the Peak’s Lair

Luzien’s lair is at the center of The Forsaken Peak (see “The Secret of Forsaken Peak Part 2, Area B16).” It is where his temple brothers buried his body.

On initiative count 20 (losing initiative ties), the Master takes a lair action to cause one of the following effects; the Master can’t use the same effect two rounds in a row.

The Forsaken Peak is home to all manner of powerful, godlike creatures. The Master is dangerous, certainly, but not nearly as strong as the others. As such, only the Eyries are affected by its presence.

Master of the Peak (Luzien)

Incorporeal Movement. The Master can move through other creatures and objects as if they were difficult terrain. It takes 5 (1d10) force damage if it ends its turn inside an object.

Innate Spellcasting. The Master’s innate spellcasting ability is Charisma (spell save DC 18, +10 to hit with spell attacks). It can innately cast the following spells, requiring no material components:

Magic Resistance. The Master has advantage against spells and magical effects.

Sunlight Sensitivity. While in sunlight, the Master has disadvantage on attack rolls, as well as on Wisdom (Perception) checks that rely on sight.

Multiattack. The Master can use its Vile Whisper and makes one attack with its Life Drain.

Create Shadow. The Master targets a humanoid within 10 feet of it that has been dead for no longer than 1 minute and died violently. The target’s spirit rises as a shadow in the space of its corpse or in the nearest unoccupied space. The shadow is under the Master’s control. The Master can have no more than seven shadows under its control at one time (not counting those created by its lair actions).

Attack. The Master makes one attack with its Life Drain or uses its Vile Whisper.

Icesoul (Costs 2 Actions). Each creature in the Master’s space must make a DC 18 Constitution saving throw. On a failure, a target takes 23 (4d8 + 5) cold damage and its movement is reduced by half until the end of its next turn. If the saving throw is successful, the target takes half as much cold damage.

Telekinetic Thrust (Costs 2 Actions). The Master targets a creature or unattended object within 60 feet of it. A creature must be Large or smaller to be affected by this magic, and an object can weigh up to 600 pounds.

If the target is a creature, the Master makes a Charisma check contested by the target’s Strength check. If the Master wins the contest, the Master hurls the target up to 60 feet in any direction, including upward. If the target then comes into contact with a hard surface or heavy object, the target takes 1d6 damage per 10 feet moved.

If the target is an object that isn’t being worn or carried, the Master hurls it up to 60 feet in any direction. The Master can use the object as a ranged weapon, attacking one creature along the object’s path (+10 to hit), and dealing 19 (3d12) bludgeoning damage on a hit.

Thumbnail Art by unknown (if you know the original artist, please let me know in the comments below)